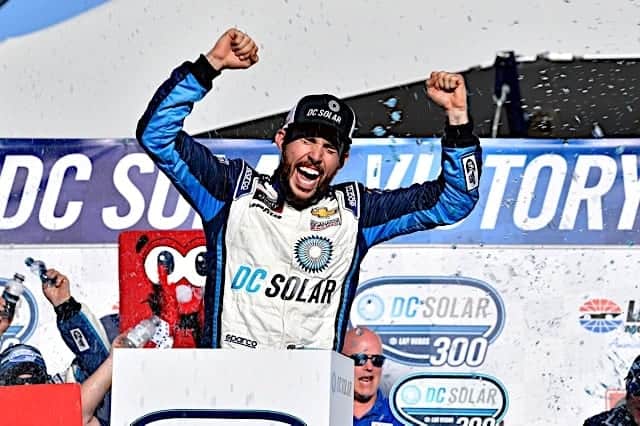 Ross Chastain will drive the No. 42 Chevrolet Camaro for Chip Ganassi Racing in the NASCAR Cup Series in 2021, Motorsport reports.

According to Motorsport, an announcement could come as soon as today, Sept. 21.

Chastain will replace Matt Kenseth in the No. 42 after Kenseth took over earlier this season for Kyle Larson, who previously piloted the entry for CGR but was released by the team in April.

Chastain was originally slated to run for CGR in the Xfinity Series in 2019, but when sponsor DC Solar was forced to pull out, Chastain lost the opportunity and ultimately ran a full season for Niece Motorsports in the Gander RV & Outdoors Truck Series. He finished the season second in Truck points standings.

In 2020, Chastain joined Kaulig Racing full time in Xfinity and is currently competing in the playoffs. In 26 races this season, he’s earned 13 top-five and 23 top-10 finishes. with a best finish of second five times, including last weekend at Bristol Motor Speedway. He’s currently eighth on the Xfinity playoff grid.

UPDATE: CGR confirms Chastain will compete for the team.

So I guess Bubba isn’t signing with CGR. Imagine that!

He might as well leave his watermelon at home next year.

THIS IS THE BEST SEAT ROSS COULD HAVE LANDED. THEY WON WITH KYLE LARSON AND KURT BUSCH HAS HAD STEADY RUNS ALL YEAR, MANY AS THE TOP CHEVY TEAM !!

He did it right. Drove some inferior equipment, filled in for Ryan Newman, has had success in good Xfinity and Truck equipment and rubbing shoulders with Kurt Bush will help him as well. I hope he does well because it will show all owners to broaden horizons.

bubba is the only one saying he was offered a ride. I think Chip made a good choice. Kurt is a great help to any teammate. Wish him well.

I did not see that coming. Makes sense for all involved, though.

I would change that file photo of Ross. This company is defunct and screwed a lot people. They put a bad light on Solar power.