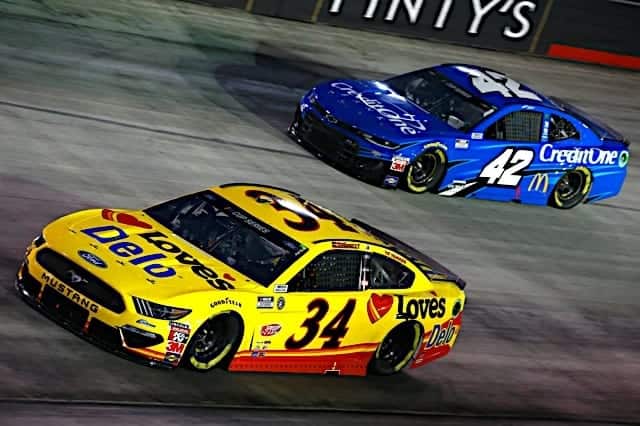 Being the top underdog each week can be a funny thing. Take for example Front Row Motorsports’ NASCAR Cup Series driver Michael McDowell.

McDowell earned the proverbial best in class award for the second consecutive race at Bristol Motor Speedway last Saturday, Sept. 19, by finishing 10th. However, in the previous race at Richmond Raceway, his efforts were punctuated with a 25th-place showing. What a difference a week (and some cautions) can make.

The torrid pace set by eventual winner and field-stomper Kevin Harvick left McDowell two laps down at the checkered flag, but it was still a successful outing. The No. 34 landed its fourth top 10 of the year and has finished in the top 15 in three of the four short-track events in 2020.

“Well, what an awesome night for our No. 34 Love’s Travel Stops Ford Mustang,” McDowell said following the race. “We got a top 10 at Bristol. I’m really proud of everybody at Front Row Motorsports. I’m so thankful to Bob Jenkins and all of my guys for giving me this opportunity. It’s the best season that I’ve ever had, and another top 10 really helps to keep our momentum rolling. We also have a Ford in Victory Lane, so that’s awesome. I’m just super excited to get a top 10 at Bristol.”

McDowell wasn’t alone in his relative success this time around. Ty Dillon also managed to leave Bristol feeling pleased with himself. Dillon wound up coming home 18th, and while it isn’t much of an eyebrow raiser initially, given how that team has struggled over the last four races, I’d call it a positive evening.

McDowell’s teammate John Hunter Nemechek also made some progress in terms of getting his rookie season trending upward again. Nemechek snuck into 20th at the end, and he, like Dillon, really needed that kind of result. After a promising start to the year, it’s been a bit of a struggle for the No. 38 recently. Time will tell if things are getting better for that group, but a small step in the right direction is a start.

Whether Brown could be considered a championship threat is a whole other story altogether, but for a team like his, just making it in speaks volumes about what Brown and his family have put together over the past few years.

Brown actually finished one spot behind Jeremy Clements, the driver he was battling for the playoff spot, but Clements’s 11th wasn’t enough to overtake Brown, who finished 12th. Alex Labbe was 13th at the end. Ryan Sieg also qualified for the playoffs with his 14th-place finish, and Timmy Hill rounded out the top 15.

Thursday (Sept. 17) saw the NASCAR Gander RV & Outdoors Truck Series tackle the concrete high banks, and many underdogs ended up getting tackled themselves. However, Parker Kligerman continued his trend of outperforming his fellow underdog participants by a mile. Every chance he gets in the No. 75 Henderson Motorsports truck, he’s a threat to win, and this time was no exception. Kligerman ended up fourth at the end, basically carrying the category on his back, as the only other underdogs to finish in the top half of the field were Ross Chastain in eighth and Derek Kraus in 15th.

All three national touring series head west to roll the dice in Las Vegas Motor Speedway this week. If you feel like gambling on an underdog, don’t forget that we had two underdogs finish in the top 10 at the race there in March. Bubba Wallace, who finished sixth, and 10th-place finisher Dillon may be up for a repeat performance.

As for the Xfinity teams, Sieg matched his best finish of the year, third, at Vegas in March and could be poised to match or even better that. He started 32nd in that first visit to the 1.5-mile desert oval, so he’s clearly capable of contending from anywhere in the field.

The truck racers will kick off the third consecutive tripleheader weekend on Thursday (Sept. 24), and I will be watching Codie Rohrbaugh, who opened a lot of eyes with his sixth-place run at Richmond Raceway and has finished 16th and 18th in his two previous Vegas races.

Probably one of the funest races I’ve had lately! Our Toyota Camry was pretty good ripping the top in the long runs which allowed me to battle w/ some of the competitive cars. Shame we had a tyre issue w/ 20 laps to go… check out my car at the end.#TeamToyota #SuarezNation pic.twitter.com/yu34lFun0s

.@TimmyHillRacer getting chided by spotter for throwing something out of car, "you litterbug!"

Well that really sucks folks. We broke the truck arm right in front of the u-bolt. On the flip side Im extremely proud of the the effort and race cars that @MhrRacing has been giving me. These guys bust their butts and I really wanted 2 give them a good run tonight. On 2 the next