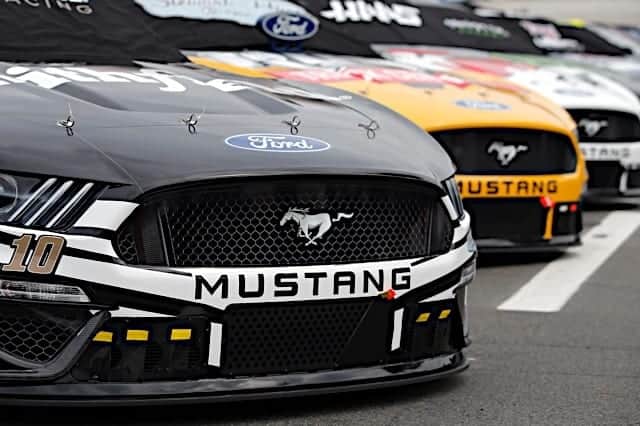 The more things change for Matt DiBenedetto, the more they stay the same.  Returning to Bristol Motor Speedway for the 2020 Bass Pro Shops/NRA Night Race, he was in need of an outstanding performance.  For the first time, DiBenedetto came to Thunder Valley as a NASCAR playoff driver.  But a pair of lackluster results in the first two races of the Round of 16 put the Wood Brothers Racing team 25 points below the playoff cutline.  DiBenedetto needed to either win the race or make up a substantial amount of points on the other postseason competitors in order to avoid elimination.  Given his history of strong runs on the concrete half-mile, Bristol seemed like the perfect place for DiBenedetto to save his title hopes.

However, there would be no feel-good story for DiBenedetto this time.  A loose wheel forced him to make an unscheduled pit stop in Saturday night’s race (Sept. 19), trapping the No. 21 three laps down.  Remarkably, the team used smart strategy and timely cautions to make up all three laps, and DiBenedetto found himself back inside the top 10 as the race wound down.  But advancing to the Round of 12 was not to be.  More tire troubles, this time caused by hitting debris on the track, forced DiBenedetto back to pit road in the closing laps.  His 19th-place finish left him 41 points below the cutoff, last among the 16 playoff drivers.  Even without the late tire issues, the points hole was too much for the No. 21 team to overcome.

Like a lot of other drivers, DiBenedetto does not have finalized plans for the 2021 season.  In fact, he is one of several Ford drivers in the NASCAR Cup and Xfinity series who face uncertain futures.  Along with DiBenedetto, other notable Ford drivers seeking new contracts include Clint Bowyer, Chase Briscoe and Austin Cindric.  Bowyer and Briscoe currently compete for Stewart-Haas Racing (Bowyer in Cup, Briscoe in Xfinity) while Cindric races for Team Penske in NXS.  All four drivers have had varying degrees of success in 2020 and each of their futures in NASCAR may be intertwined.

In DiBenedetto’s and Bowyer’s case, the biggest question is whether they have done well enough to maintain their current rides.  DiBenedetto likely exceeded some expectations by making the playoffs in the first place.  The Wood Brothers are not regular postseason participants, and it is worth something that DiBenedetto got them there in their first year together.

However, the No. 21 team has experienced a slow fade since its fast start to 2020.  DiBenedetto nearly dropped out of a playoff spot in the closing weeks of the regular season, saved by some timely wrecks at Daytona International Speedway in August.  Not only has he not challenged for wins, but his last top 10 was seven races ago; his last top five was five races before that.

Nobody expected DiBenedetto to truly challenge for the championship in 2020. However, scraping into the postseason and an early exit does not reflect the same level of improvement he showed late in 2019.  It’s been a good year for him, just not a great one.

Bowyer was another driver who needed a top-tier performance at Bristol.  The No. 14 struggled early in the race, but William Byron’s troubles significantly increased Bowyer’s chances of advancing to the Round of 12.  He did just that with a respectable sixth-place result.  2020 now becomes the third consecutive season in which Bowyer has advanced to at least the second round of the playoffs.  Only seven other drivers currently hold the same streak.

Yet, like DiBenedetto, Bowyer may be good but not good enough to keep his job.  In 137 starts with SHR, Bowyer has won only two races.  Both victories came during SHR’s standout 2018 season, with the more recent one coming some 86 races ago.  Bowyer’s other numbers are down, too: he had seven top fives at this time last year compared to two so far this season. His 14 top 10s a year ago are more than the 10 he’s racked up so far this year.  While he has expressed interest in returning to the No. 14, Bowyer does not have a new deal set up just yet.  Would another good, but not great, playoff run be enough to bring him back to SHR?

The reason DiBenedetto and Bowyer are on the hot seat is because Cindric and Briscoe have been superb.  In fact, the two of them are tied atop the Xfinity Series playoff standings and remain the favorites to win the championship.  Cindric captured the regular season title with five victories while Briscoe won seven times, including at Bristol on Friday night (Sept. 18).  Neither of them has announced definitive plans for next year, and both could make the case they are ready for the Cup Series.

If Team Penske wanted to bring Cindric to Cup, DiBenedetto would likely be the odd man out.  The Wood Brothers have a technical alliance with Penske and have served as a development team for The Captain’s organization before.  What Penske and the Woods will have to decide is if any future progress DiBenedetto might make is worth sacrificing to get Cindric to Cup.  Given Cindric’s family ties to the Penske organization – father Tim is the team President – it seems unlikely he would sign with anyone else.  But if Penske thinks that Cindric is ready for the next level, or if there is only enough sponsorship for Cindric or DiBenedetto, the latter will have to hope the progress he has made with the Woods this year will be good enough for a second season.

SHR, meanwhile, will have to decide what to do with the No. 14 car.  Its current sponsors vouched for Bowyer last year when it looked like he could be replaced by Cole Custer.  Briscoe has had issues with sponsorship for most of his time in the Xfinity Series, usually working with piecemeal deals and support directly from Ford.  But if SHR can find sufficient Cup sponsorship for Briscoe, it would almost certainly accelerate the timeline for his development.  One possible landing spot for him would be the No. 32 car soon to be vacated by Corey LaJoie.  Otherwise, SHR might look at Bowyer’s relative lack of wins and be willing to let him walk.  If that happened, it is unlikely that another team of this caliber would be seriously interested in signing a 41-year-old Bowyer.

Bowyer, Briscoe, DiBenedetto and Cindric all have a reasonable argument for being in the Cup Series in 2021.  There is always the possibility that all four drivers could stay put and await the Cup Series Gen-7 car in 2022 before making any big changes.

However, in the middle of a global pandemic, and with budgets likely to shrink by next year, Team Penske, SHR, and Ford will have to make some tough decisions about their driver lineups. Chances are high at least one of them will get left out.

Is great success in the Xfinity Series worth sacrificing playoff-level talent in Cup?  For DiBenedetto and Bowyer, we’re about to find out if “good” will be good enough on their final report card.

A big reason DiBenedetto even got this chance is because Menard (and their sponsorship) vouched for him. I wonder how much that will factor into the decision for the #21

AND WHILE THIS ARTICLE WAS BEING WRITTEN, KYLE LARSON JUST WON HIS 39TH RACE OF THE YEAR IN SPRINT CARS, EASILY THE MOST DOMINATE RACER IN ANY SERIES, ANYWHERE !!

Jack Thompson: Can you PLEASE find the Caps Lock key and shut it down!

As for Larson, he is welcome to stay where he is, being a big fish in a little pond. He never had his heart in NASCAR. I suppose he only wants to come back for the money. The rides should go to somebody who is actually ready to put his full attention on NASCAR. I just hope Hendrick doesn’t fall for the media hype on this guy.

Jack:
I am sure you are a Larson fan. However, he does not play well in the Board room of Ford, General Motors, or Toyota. NASCAR may reinstate him. Got a feeling they will because the main cheerleader, Dave Moody, has started saying it’s time to bring him back. Moody and the Waltrips are the pipeline to the public. Dave can deny it all he wants, but there are examples.
Sponsors, especially at this time and environment, are not going to support hiring him. Someone could fund him out their own bank, and NASCAR could back him into a victory. If that’s the case, he could end up at Hendrick because Ally finances a great deal of the Automotive empire.
In other words, Larson will not happen.

Dave Moody’s function in NASCAR topical discussions is to constantly keep chaos among fans who make sense and keep himself in the spotlight. What a jerk!

It doesn’t matter one bit whether Nascar reinstates Larson or not. And no decision maker at a company which can afford to fund a top flite Cup team is going to be willing to commit career suicide by backing him.

My guess is that Briscoe takes over the 14 ride. And Clint Boyer ends up at RPM driving the 43.

If SHR is willing to significantly up the technical alliance with the GoFas Racing #32, that could be a viable spot for Briscoe or even Bowyer.

Surprise! With Chastain getting signed to the CGR #42 (he will be cheap), the number of quality seats has been quickly slashed. Then there is that crazy deal that Denny Hamlin is trying to put together with Bubba Wallace & Toyota. That leaves the HMS #48 still open as a prime ride. If talent were the determining factor Erik Jones would get that ride, but if money is an issue, then it might be one of the JRM Xfinity drivers who has sponsorship attached, such as Allgaier.

I don’t think that Penske/Woods will call up Cindric, nor will SHR call up Briscoe for next season because it will be the last year using the old car. I think DiBennedeto and Bowyer keep their rides for next year, but they will only have one year deals. However, in the case of Bowyer, he will likely have to take a big pay cut to drive for SHR for the final year of his Cup career.

Why NO fine for BUBBA throwing his drink in another person face. That’s called assault.