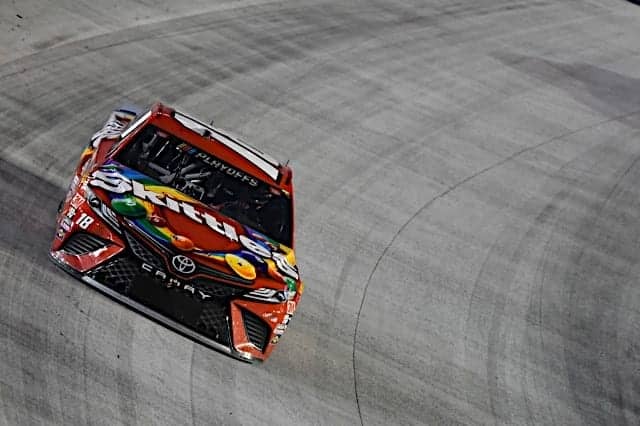 Kyle Busch‘s struggles in 2020 are growing more and more evident by the week.

But the true extent of what the No. 18 team is facing was placed front and center Saturday night (Sept. 19) in the Bass Pro Shops Night Race at Bristol Motor Speedway – even if the results don’t tell us that on paper.

Visually, Busch was not just strong; he was a legitimate threat to win. For the first time since the spring Bristol race in May, Busch led over 100 laps (159 on Saturday, 100 in May). And perhaps for the first time all season, Busch appeared the be wheeling the fastest car on track.

That he marched through the field after a pre-race inspection failure, then chased down Kevin Harvick to fight for the lead gave me – and likely most people paying attention – the sudden feeling that maybe Busch is finally back to form.

The result was a second-place finish, Busch’s best since run since Atlanta Motor Speedway in June. His push for a victory stopped short when he was unable to cut through lapped traffic as well as Harvick, thanks in part to being held up by Joey Logano.

Still, there was plenty to smile about after the race if you’re Busch, right? He was competitive, dicing through the field, someone who posed a legitimate threat to the dominant car of the year. What’s not to like?

Well, if you’re Busch, the answer to that is easy: losing.

“Frustrated over finishing second,” Busch said. “You know, just felt like this was one of our greater shots to win, and I don’t know. You know, just come up short.

“Skittles Camry was fast and we had a good car, one that was in contention all night long. Fired off the start of the race, I was like, ‘oh, wow, this is a pretty good car.’ And then got beat by another really good car, I guess. Yeah, that’s all there is to it.”

The overwhelming emotions Busch emitted after the race, aside from the obvious frustration, were dejection, confusion and defeat.

Playing armchair psychoanalyst isn’t something I recommend, and it’s likely wiser that I don’t. But the dejection in his voice following the events of Saturday night seemed too evident to ignore.

Finally, Busch had a car capable of challenging Harvick. And yet whether due to lapped traffic or a gap in equipment, Busch still couldn’t find a way to close the deal. The reigning series champion was left wondering what else he could have done to fight past the No. 4 car. Maybe if he hadn’t gotten stuck behind Logano, he would have had a better chance, but there’s hardly room for maybes in the playoffs.

Defeat, of course, leads to frustration, let out by pointing the finger at those around him.

“He’s nobody’s friend for a reason, so there you have it,” Busch said of Logano. He was also critical of lapped cars driven by Joey Gase and Garrett Smithley impeding his progress.

And yet perhaps more telling than anything else was the look of resignation Busch offered.

Does a run at Bristol give Busch any confidence that he can contend with – or is even close to – Harvick or teammate Denny Hamlin on speed entering the second round of the playoffs?

At this point, the defending Cup champion isn’t even expecting to advance into the Round of 8.

“We’ll be eliminated in the next round, so don’t care,” he added during a post-race presser notable for how long said mood boiled over.

Sure, Busch was full of sarcastic comments Saturday night. That’s how he rolls. But his mindset is also being set directly on the table in front of us.

So what is the separating factor at this stage of the season?

Hamlin and Harvick have praised their respective crew chiefs, Chris Gabehart and Rodney Childers, for bringing cars to the track that unload fast. Getting it right, right out of the gate is key in a year without practice.

Busch has noted the lack of practice has hurt his team more, and it’s possible the lack of performance is straining the relationship between him and crew chief Adam Stevens. Only they can say that for sure, and I certainly don’t expect a sudden change at the end of the season. But certainly the equipment is there if their teammate has six wins this season, right?

Busch has always raced with a winning-is-what-we’re-supposed-to-do mindset. When he finally breaks this 29-race (and counting) winless streak, don’t expect a massive celebration. Instead, expect relief. Expect a “finally,” a more frustrated version of success instead of an emotional breakthrough.

The only tangible question that remains is where that next victory comes. And without another Bristol left on the schedule, it’s time to wonder whether it happens this season for Busch.

Busch is a whiney asshole, blame, blame blame! It seems in his mind the rules of racing used against him are personal, except when he does it! I cannot stand this jerk. With that said, this season sucks because of the ELECTION INFECTION. What the hell, nobody gets to practice, work out the kinks or whatever. It is very interesting how some crew chiefs are getting their drivers stats they have not seen in a long time…Denny I am talking to you. When was the last time a driver won 9 races? Kevin I am talking to you! The whole season is just a freak show. If history has a say here, I would think with confidence Kyle would be in a much better position than he is now, if normal was normal. That can be debated, pure speculation. A freak show trying to tell you it is all normal…..Nope! IMO