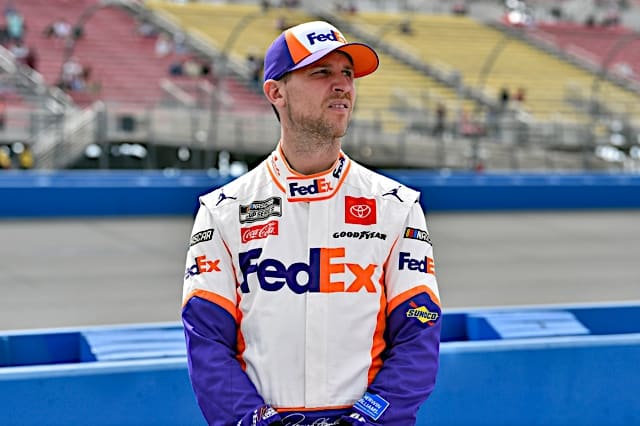 Despite all that 2020 has thrown in our direction, NASCAR racing has brought a sense of normalcy on the weekends since the middle of May. Prior to the COVID-19 pandemic, the on-track product seemed to be trending upward with the spectacular races we saw in the first four weekends of the year. There have definitely been some duds throughout the season, but it is fair to say this season of racing has not been very bad at all.
Would you say the season has been subpar at best or good? Aerodynamic package aside, have intermediates improved from last year with 550 horsepower? Which races have been the best showing for the 2020 season?
Denny Hamlin has been dominant throughout the year, but recently, we have seen that dominance strictly handed over to Kevin Harvick. The two drivers have shared the majority of the wins in 2020 (combined to win 15 out of 29 races), but Hamlin has been on a cold streak over the past month. Now that the Round of 12 is set to begin, his team must perform the way they had all season in order to reach the Championship 4 in order for Hamlin to have a chance at his first NASCAR Cup Series title.
Is that team lost right now or was the first round just a fluke? Will he win again this season or will the struggles continue? Is he a lock for Phoenix Raceway?

Q: With as difficult as 2020 has been on everyone in the sport, what do you think we have learned about the racing in general? Has it been good or subpar at best? Tim T., Syracuse, NY

A: Quite honestly, this season started off very strong for racing. Pre-pandemic, the races were great, and there were no complaints about how they turned out. All four were entertaining and had their fair share of drama to them, but all provided great races. It stayed that way for a few races after the return in May, but if we are going to rate it as a whole, there seems to be work that needs to be done, specifically at intermediates.
While we’ve talked about the “package” many times before, I will not mention that. Everyone knows a change of the package for intermediates is what many of us want and will likely improve races if it happens. However, I’m going to look at it in a different perspective, which is without a package change and what NASCAR can do better overall for the current cars.
Short tracks and one-mile tracks have had phenomenal racing. That is one thing that does not need to change, they made the right change this year with the 2018-type package for those tracks. While the drama seemed to be lacking like we all may have expected, we have seen duels to the end between the best several different weeks.
Now, there have been certain races this year — such as Charlotte Motor Speedway in the Coca-Cola 600 — that have been extremely lackluster at best. There are a few things NASCAR can do differently. First is the tire dragon and PJ1 being applied to many of these tracks, and how it has made it worse at many of them.
One issue this season has been with the lack of track time prior to a race. Because of that, the tracks don’t have enough time to rubber in at all. The tire dragon has been used at Texas Motor Speedway, Michigan International Speedway and Charlotte, tracks that used to provide multi-groove racing. The only track that it really benefited with the use of the tire dragon was Texas. Turns 1 and 2 were more racy than usual with the dragon laying down rubber on the outside groove.
Charlotte took a tumble. There was not anything specific, the racing just was not up to its full potential in either race. That could just be a package problem where it just does not work there, but last year’s 600 was entertaining. However, the solution is less of the tire dragon. It doesn’t seem necessary many weeks, and it can ruin racing with as much as they seem to use it.
Goodyear also could try and bring different tire compounds that suit for quality racing. That is something that could drastically improve the racing without a package change. Tires affect racing a lot with wear, and if Goodyear can do that, the on-track action will see the benefit.
So if I had to give the racing a rating this season, I would say a 7/10. Short tracks get a 10/10, but overall I would give everything a seven. There is a ton of room for improvement, but when we look at it, things have been solid for the crazy year everyone has experienced.
Q: Is Denny Hamlin losing his mojo, or is he just on a streak of bad luck right now? Lucas P., Harrisburg, NC
A: Even though Hamlin has struggled the last few weeks, I do not see him coming up short of his goal of making the Championship 4 at Phoenix Raceway and having a chance at the title in early November. The No. 11 team has been way too strong this year to be down for long.
The series did visit some of his best tracks — Darlington Raceway and Richmond Raceway — and he did in fact struggle in traffic, but I believe it was more so just some luck factored in there. Richmond was a struggle for speed, but Darlington and even last weekend at Bristol Motor Speedway was just bad luck; wrong place, wrong time.
Hamlin knows this is probably his best chance at winning a championship with as strong as his team has been all of 2020. While he will have to beat Harvick, who has by far been the best driver this season, there is a good chance he can do it with his track record at Phoenix.
However, even with my belief, he has to get there first to have a chance. This round coming up is going to be very important for him to get back to winning form. If he goes into the next round on another cold streak, it will be a struggle to get out of there and move onto Phoenix.
If Hamlin wins a race in the Round of 12, there is no doubt everything is just fine in the No. 11 camp, awarding him at least five additional playoff points. However, if he struggles again at Las Vegas Motor Speedway this upcoming weekend, then I would be concerned. It could be that the competition has possibly caught up to his performance, but then how do you explain Harvick, who was on the same level as him as of about a month ago?
It does somewhat seem that he has lost his mojo, but he was possibly just racing conservatively in the first round since he had such a cushion above the bubble. Now that he needs some really solid performances, we may see the Hamlin we have seen all year long.
I have full confidence that he will be in Phoenix and that he will be winning another race or two before then. The struggle seems real now, but do not expect it for long. He will get going again, no doubt.