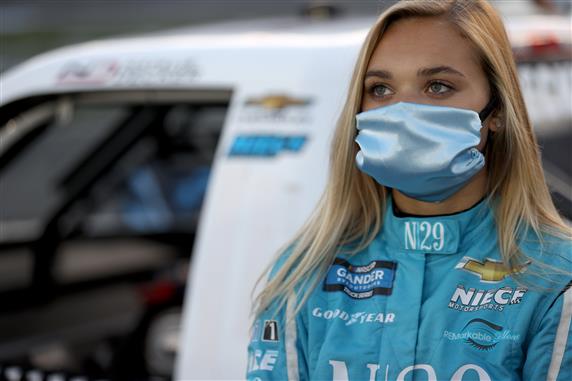 NASCAR Gander RV & Outdoors Truck Series driver Natalie Decker is well into her second part-time season of competition in the series, this time with Niece Motorsports.

Decker debuted in the ARCA Menards Series in 2017, appearing in seven races, and followed that up with a full season in 2018. The then-21-year-old scored two top-five and nine top-10 finishes, earning a seventh-place result in the standings when the season concluded for Venturini Motorsports.

After a part-time rookie effort in 2019 with DGR-Crosley’s Truck team, Decker made the move to Niece’s No. 44 truck for 2020. Her best career finish came in the season opener at Daytona International Speedway in February, where she finished fifth – the highest finish ever by a female driver in NASCAR’s Truck division. The Wisconsin native then missed the series’ event at Pocono Raceway due to hospitalization for bile duct issues but was back on the track two weeks later at Kentucky Speedway.

Frontstretch caught up with Decker in both June and September to talk racing during a pandemic, her record-setting Daytona finish and joining a new team for 2020.

Adam Cheek, Frontstretch: Where did your passion for racing come from?

Natalie Decker: My family on my dad’s side, his parents and all his brothers raced snowmobiles. They also [drove] dirt cars, and they race dirt bikes. There’s a lot of different things, but their main thing was snowmobile racing, … and my dad used to own a snowmobile racetrack. It was called the World Championship Snowmobile Derby – he recently sold it but I grew up working there with him, hanging out, always watching the snowmobile races, and that’s really where I fell in love with racing, is because my dad had this racetrack and I got to be there every day with him.

He was also a big NASCAR fan, so we’d always watch the races together on Sunday and hang out as a family and make a bunch of snacks. It was just always a big, fun day on Sundays as well, but I think really what made me fall in love with motorsports was definitely my dad having that racetrack and being able to be there with him and experience it almost every day.

Cheek: What made you gravitate toward NASCAR in particular?

Decker: Well, we would watch NASCAR every Sunday, and that was just so fun. He [dad] always told me stories of when he wanted to start racing asphalt, he went and met up with Mark Martin at his shop to buy one of his old super late models, and he wanted to get his start and asked about racing. I heard that story and I was like, ‘That’s so cool! My dad knows someone on TV and bought one of his race cars.’

That inspired me so much, but also I was on my way home from a business trip with my dad one weekend, and we were driving back home. We were maybe an hour and a half from home, and there was this dirt go-kart track and the lights were still on, so we pulled in and they were still racing, … and I just fell in love with these go-karts. There were so many kids there, they were all my age, they were all racing and their families were there and it looked so fun. And I told my dad for years after I saw that race [that] I wanted to start racing go-karts, and it took him a while, but then finally for my ninth birthday, he got me a go-kart.

Cheek: What major differences did you discover during the transition from ARCA to Trucks?

Decker: There was a big difference just with aero and how the trucks handled in traffic. That was one of the biggest things even going into the ARCA Series and racing on these big tracks like mile-and-a-halves – the cars just felt so different. I come from short track racing, so to feel this big aero difference and how the cars handle in the corners and when you’re in traffic, and then getting in a truck magnifies it by like 10. It makes it so much more different, but I’m glad I got to experience a mile-and-a-half in the ARCA car. Now that I’m in the truck [though], it feels a lot different, mostly the aero and the air and how the trucks move around in traffic.

Cheek: Was that transition difficult?

Decker: It was different, but it wasn’t different at the same time, just because when I moved from ARCA, the first team I moved with was DGR-Crosley. That was the first season I did in trucks, and we didn’t even do a full season. We did about a little over half a season, and they were really good at making sure I knew everything that was going to be happening, and they made sure I was gonna be very prepared every time I’d go to the track. That was nice to have that, so the atmosphere and things like that it weren’t really that different, like going to a racetrack and racing is the same no matter what series you’re in. You still [have to] practice and qualify and race, do all the same things. It’s just the competition gets harder and harder every time you move up.

Cheek: Speaking of Niece, what precipitated your deal with them for 2020, and how easy was the switch between teams?

Decker: You know, I really like being with Niece. We had that great finish at Daytona, and the teammates, having Ross [Chastain] there and all those good teammates, that’s just so wonderful to have that. To be able to have them there to ask any questions or go over what happened in practice or the race, they’re such a great team and the deal came a little bit later than I hoped. We were a little late to the deal, but other than that, we knew that we were going to be with them. … Everything was so perfect. And I’m just really excited that I’m over there, I have a great team.

I’m working with Paul [Clapprood], my crew chief, and our relationship is great. He’s really fun to work with, and I just feel like the connection between me and my crew chief is very important and to have that. The main thing was it was so cool to walk into Niece and know that those were going to be my teammates.

Cheek: Last year, you had sponsorship from the Arthritis Foundation at Homestead-Miami Speedway, and you have a long history with them. Why does it mean so much to you to represent them?

Decker: I was born with an autoimmune disease – rheumatoid arthritis. It just means so much that I got to be able to have them on my truck, and we donated over $17,000 to their foundation just from all my fans supporting me and the foundation and donating. We auctioned off the hood, my race suit, my helmet my gloves, everything, and it just meant so much to me to have that and have it be a part of the last race of the season last year.

Cheek: What did finishing so well at Daytona mean to you, career-wise?

Decker: It meant so much. It made me so happy to be up there running fifth and finishing fifth, especially a track like that, and it was so fun. My team had such a great strategy, and they were so amazing on the radio. They were just so happy at the end and [so was] my sponsor. It was just a really great weekend.

Cheek: Your Daytona run was the best finish by a female driver in Truck Series history. What did that achievement mean to you on a personal level?

Decker: That just means so much to me that I have that, and hopefully this year we can break that again and finish higher than fifth. That’s definitely a goal of mine now.

Cheek: How have you been approaching the no-practice, no-qualifying regulations for 2020 races?

Decker: It sucks that it’s so different now – there’s no fans there, that’s the biggest thing that makes me sad. My family can’t be there, my boyfriend can’t come, my sponsors can’t come, and that’s what makes the whole atmosphere so fun. Having no practice is really difficult, especially because a lot of these drivers I’m racing against have been going to these tracks for years and have been racing there, so they have so many laps there. I don’t have that much experience at these tracks, so I really do want that practice and need that practice … but I’m going to just study film as much as I can, get on iRacing, get on sims and get as many laps as I can virtually before I get there, so I can be the most prepared I can be when we unload and go for the green flag.

Cheek: How disappointing was it to miss Pocono due to your hospitalization?

Decker: Missing the race was definitely the worst part about being in the hospital, and then the second worst part was being hospitalized during [COVID-19]. I’ve been hospitalized a couple different times in my life [and] it was never that bad because my family could be there, I could have people staying the night, different members visiting all sorts of times during the day. During COVID, I had to be in the hospital alone for about three days until my COVID test came back (negative), and then finally I could have only one family member come in. There were visiting hours, so they couldn’t even stay that long, so that was really difficult.

The worst part was sitting in the hospital watching the Pocono race on TV and watching my team race without me, which really sucked.

Cheek: When you came back for Kentucky, how much of a relief was it to get back in a truck again?

Cheek: Over halfway through the season, what has your time working with Niece been like and how have you guys cleared the hurdles of the pandemic?

Decker: It’s been wonderful, it’s been so fun ever since Daytona. It’s just different now, though, because of COVID, we don’t get that practice. So you all have to work together and really communicate because all you have is the race. So far, it’s been going really well. That first stage is usually where we’ll struggle the most just because when we unload, we don’t get to go and make any adjustments during practice, and we just have what we have for that first stage. That’s where we struggled the most, but after that, we usually can communicate really well and figure out exactly what I need and what the truck needs.

Adam Cheek joined Frontstretch as a contributing writer in January 2019. A 2020 graduate of VCU, he works as a producer and talent for Entercom Richmond's radio stations. In addition to motorsports journalism, Adam also covered and broadcasted numerous VCU athletics for the campus newspaper and radio station during his four years there. He's been a racing fan since the age of three, inheriting the passion from his grandfather, who raced in amateur events up and down the East Coast in the 1950s.
@adamncheek
Previous The Frontstretch 5: Big 2020 NASCAR Silly Season Dominoes Yet to Fall
Next Did You Notice?: Bubba Wallace, NASCAR, Toyota & The Denny Hamlin-Michael Jordan Bromance 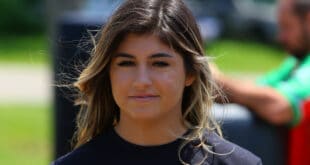 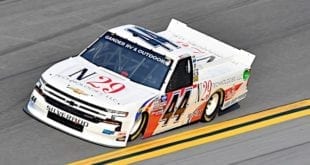 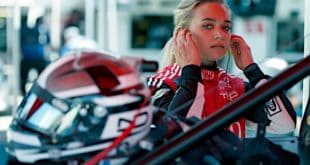