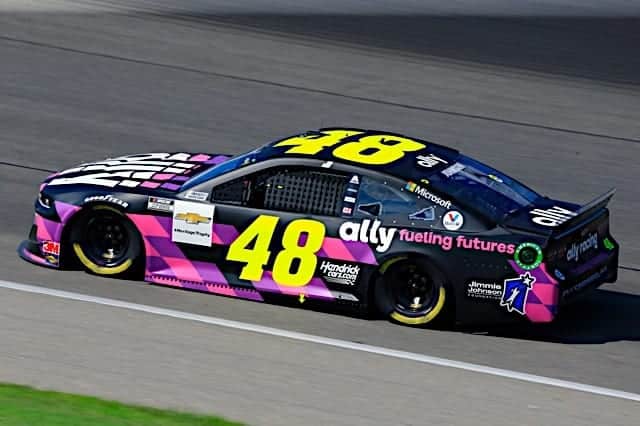 The dominoes began falling in Silly Season 2020 early this year, and they certainly picked up steam this week, with the announcement that Bubba Wallace will join new team owners Michael Jordan and Denny Hamlin in a new Toyota NASCAR Cup Series effort for 2021.  With that comes the announcement that Germain Racing will close its doors, having sold its charter to the new team.  That leaves Ty Dillon without a ride.

Ross Chastain was announced as the driver for Chip Ganassi Racing’s No. 42 Chevrolet this week as well, filling one of the top available rides.  There are a lot of drivers without rides and quite a few rides without drivers, but here are the biggest pieces still left to be worked out. There’s still a lot of silly season left, even as NASCAR enters the homestretch of the 2020 season.

There are a couple of other possible open rides, but those hinge on whether or not the current drivers re-sign, and if they don’t, they’ll most likely never make the open market in free agent negotiations. That leaves the No. 48 — and its impressive legacy — as the biggest ride up for grabs at Hendrick Motorsports.

There’s certainly been speculation, with Kyle Larson the current rumor du jour, and a free agent driver makes the most sense for a couple of reasons.  One, Hendrick Motorsports has three fairly young drivers, and while they all have a few of years of Cup experience with a top team under their belts, they’re not necessarily ready to bring along another young rookie yet. A veteran would be a wise choice, and Larson is certainly incredibly talented, as is Erik Jones.

Two, if the team was going to bring a new driver into the Cup fold, JR Motorsports would be the logical source, but Justin Allgaier is really the only Cup-ready driver there, and he may be content to stay there and contend for titles without the Cup Series pressure. That would mean a lot of unknowns in signing a driver like John Hunter Nemechek or Harrison Burton from an outside source. Hendrick is in a bit of a rebuilding phase, so new blood might make the most sense right now.

While the ride has full sponsorship via Ally, that does mean the sponsor gets a major say in who pilots the car. Could that hurt Larson’s chances given his current suspension? Maybe. Ally will have to be sold on a driver who’s almost certainly at least a small step down from the retiring seven-time champion Jimmie Johnson, so there’s driving talent in play here, but also marketability to the sponsor.

There’s also a real chance Johnson’s teammate Alex Bowman takes over the No. 48 car and Ally sponsorship, and Hendrick looks to fill the No. 88 ride instead.

The No. 14 Stewart-Haas Racing Ford is one of those “won’t be open to the general driver population” rides. Greg Zipadelli, competition director at SHR, has said he thinks the current lineup will stay intact, but the team has yet to announce that they’ve re-signed Clint Bowyer, whose contract is up this year.

On one hand, Bowyer had a decent season, making the playoffs and currently entering the Round of 12. He hasn’t won, but he’s been solid, and his outgoing, relatable personality resonates with fans.

On the other hand, Bowyer hasn’t won since June of 2018 and he’s 41. If sponsors waffle, it could mean Chase Briscoe gets the call. Currently entering the playoffs tied for the top spot in the NASCAR Xfinity Series, Briscoe has seven wins in NXS this year, and if SHR doesn’t move him up soon, another team could steal him away. Granted his NXS competition isn’t as stiff as it was a year ago when he had just one win, but he’s also had another year to mature and learn as a driver. If Bowyer doesn’t return, either lured to the television broadcasts or not given a vote of confidence by SHR or the No. 14 sponsors, Briscoe is an almost certainty to fill the seat.

The No. 21 Wood Brothers Racing Ford is in almost an identical scenario to the No. 14 in that it may or may not see a driver change, but that change would be a specific driver, not a test of the free-agent waters.

Matt DiBenedetto has been impressive in his first year with the team, making the playoffs for the first time in his career. And while he was eliminated, the team enjoyed its best season since 2017 with Ryan Blaney. DeBenedetto is a fan favorite, getting the attention of viewers with a few very impressive races in subpar equipment prior to getting the opportunity in the No. 21 car, and was hand-picked by the retiring Paul Menard, whose family also owns one of the team’s primary sponsors.

But Wood Brothers is a satellite team for Team Penske, and while that alliance has worked well for both teams. Penske currently has more drivers than cars, with NXS standout Austin Cindric (five wins in 2020) looking to move up. Cindric’s father, Tim, runs Penske’s IndyCar program and that gives his son a good bit of job security. He might benefit from another year in Xfinity, but he’s likely going to move up sometime soon. That could put DiBenedetto in the crosshairs regardless of his performance and popularity.

Let go from Joe Gibbs Racing in favor of Christopher Bell, Erik Jones, who turned 24 this summer, already has a NASCAR Gander RV & Outdoors Truck Series title under his belt, winning that at just 19 years old. He also has a top-five Xfinity Series points finish and two Cup playoff appearances under his belt in four full-time seasons. Again, he’s only 24!

Jones has shown he’s got talent, and he’s got years ahead to develop it.  Remember Joey Logano?  Logano was also let go at a young age by JGR and once he moved to Team Penske, where he was allowed to develop with a team willing to make that happen, he flourished, winning the Cup title just six years later. Could lightning strike twice if Jones lands with a capable team?

Jones would be a good addition to almost any team, and could also help grow a mid-tier team, like Richard Petty Motorsports, with the right sponsorship, equipment and patience. He could prove quite a catch for someone.

Larson has a lot of convincing to do if he’s going to race in Cup next year, starting with NASCAR. While it’s likely that the sanctioning body will reinstate Larson from his current suspension if he applies, he hasn’t done so yet. Blacklisted by NASCAR, his team and sponsors after a racist slur was made on a live broadcast, Larson has spent 2020 tearing up dirt tracks, winning regularly just about everywhere he goes.

He has seemed to be genuinely contrite about what he said and got a huge lesson for his mistake. If he’s learned from it, he deserves a second chance. There has been plenty of speculation about Larson possibly winding up in the No. 48 at Hendrick Motorsports (see above) — that team is co-owned by Jeff Gordon, who has always championed Larson as a driver. And if anyone can convince Chevrolet to give Larson a second chance it’s probably Rick Hendrick.

Another driver-owner who has been vocal about Larson’s abilities is Tony Stewart. That could make Larson a possibility for the No. 14, but he’s still part of a small logjam there with current driver Bowyer and prospect Briscoe.

That’s all assuming, of course, that Larson wants to commit to a return to Cup. He’s always been happy dirt racing, and he’s thriving in that environment this year. It’s possible that Larson will decide he’d rather stay in a place where he’s happy and winning. He’s got six Cup victories but hasn’t been able to close out at least that many more, and it’s possible that the shorter races are his real forte. Larson is the best raw talent available, and the 48 is the best open ride, … but that doesn’t necessarily mean a done deal or a match made in racing heaven.

I know it’s not likely, but any chance Penske moves Cindric into a fourth cup team with a sponsor such as Money Lion?

Larson or not to Larson, that is the question. Hendrick has NEVER seen value and always seen risk in his drivers ‘moonlighting’ in other forms of racing. Larson negotiated a deal as part of his contract with Ganassi to be able to drive 20 races (or so) a year in a dirt car. This alone, plus Chevrolet going so very public in their condemnation of Larson’s saying an offensive word make his return unlikely, at least this year and in a Chevrolet any year.
Larson said a word which is offensive to some. Players in other sports can beat their wives and be forgiven. Kyle said one word, not in anger. A word so offensive that its used freely in the black community and in songs by black artists. I don’t condone what he did, but there are way, way too many casting their first stones t hat have no business doing so. Nascar will not allow Larson back in. The risk of loosing sponsor $$$ in too great for what he brings to the show. Sounds kind of discriminatory, doesn’t it?

Jeremy Clemens said the N-word on TV at a NASCAR event in reference to a driver who cut him off on track, A way worst thing then what Kyle Larson did and NASCAR only gave Clemens a 2 week suspension, So the question is why is Clemens allowed back in NASCAR when he did something way worse then Larson did

Because there weren’t any full-time whiners back then. We are living in the age of the squeaky wheel thanks to social media. Cry loud enough and corporations fold. There are a lot more people just looking to find something to whine about than there were even a few years ago.

While it’s now a mid tier car there is something special to being the driver of the 43. My guess for that driver is Clint Boyer. I think it would be a great way to end his career driving the 43.