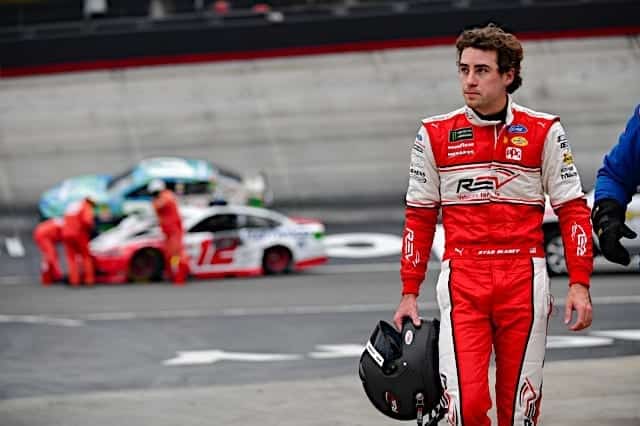 Ryan Blaney is one of the most popular drivers in NASCAR. His modest personality helps him on and off the track, and after his first career victory at Pocono Raceway in 2017, everything looked to be lining up perfectly for Blaney to take NASCAR by storm. That has yet to happen.

Since joining the Team Penske organization before the 2018 season, Blaney has just three victories including two at Talladega Superspeedway. This season, Blaney made the playoffs thanks to his win at Talladega and also found himself as high as second in the standings. But his championship hopes were dashed after the first round.

Overall, the 26-year-old driver from High Point, North Carolina has made 191 career starts. He has four career victories with 35 top-five finishes and 70 top 10s. He has finished in the top 10 in points three times in his first four seasons but has yet to finish in the top five in points.

This got us thinking: Has Ryan Blaney’s career been a disappointment so far? Mark Kristl and Clayton Caldwell give their thoughts on the subject in this week’s 2-Headed Monster.

Blaney’s Career Has Been Right on Course

Since 2016, only six newcomers to the Cup Series have been victorious: Blaney, Chris Buescher, William Byron, Cole Custer, Chase Elliott and Erik Jones. Of those four, only Elliott has won more than Blaney.

While Elliott bests Blaney in comparison, consider Blaney’s first two years in the Cup Series, in which he drove for Wood Brothers Racing in 2016 and 2017. In his first year, the team lacked a charter. It was also the team’s first full-time campaign since 2008. There were growing pains for all.

In 2017, Blaney not only improved all his statistics but scored his first win.

After two seasons driving the No. 21, Blaney moved to Team Penske to take over the No. 12 Ford. Wood Brothers Racing has not won since Blaney’s departure with Paul Menard and Matt DiBenedetto behind the wheel.

Both 2018 and 2019 trended in the right direction for Blaney. He finished 10th and seventh, respectively, in the championship points those seasons. He had more top fives and top 10s, completed more laps throughout the season, and his average finished position improved.

Blaney dealt with change even before the COVID-19 pandemic began. He was paired with crew chief Todd Gordon, who previously served as Joey Logano’s crew chief.

NASCAR has not held practice sessions since it returned from its hiatus. Without that on-track time, there has been less time for Blaney and Gordon to better their communication. As a result, the duo have struggled to get a feel for each other.

Looking at Gordon’s resume offers significant optimism to Blaney’s career. Gordon won the 2018 Cup Series championship with Logano and has been a winning crew chief every year since 2013. His drivers have finished in the top 10 in the championship standings in six of the last 10 years. In 312 races as a Cup Series crew chief, Gordon has watched his drivers score 109 top-fives. The combination of Gordon and Blaney will only continue to get better.

As for Blaney, his career has continued on par. He has won in four straight seasons.

This season, he led laps in the opening three races, then had a streak of leading laps in six straight races from the eighth race of the season until the 13th race. Shortly before the playoffs, Blaney had race-winning speed as he led laps in another six straight races. He entered the playoffs with a sixth-place finish in the regular-season finale at Daytona International Speedway.

The Round of 16 was unkind to Blaney. For the first time this season, he endured three straight races where he failed to finish on the lead lap.

For Blaney, this season will serve as a blip on his Cup Series resume. It won’t define his career as a disappointment. – Mark Kristl.

The first time I heard of Ryan Blaney, I was impressed. He was talking to Dave Moody on SiriusXM NASCAR Radio after announcing he was going to drive for Tommy Baldwin Racing in the NASCAR Xfinity Series. He sounded like an intelligent kid with some raw talent, but I didn’t expect him to get into Tommy Baldwin’s Xfinity Series car and turn heads immediately. In his first race with the organization, he went out and ran in the top 10 all night and finished seventh.

He lived up to the hype. It was no surprise that he caught the eye of Roger Penske and Wood Brothers Racing.

Blaney performed well in the No. 21 car. In his first full-time season in the Cup Series, he finished 20th in the standings. The next season, he won his first career race at Pocono Raceway, and he also finished ninth in the points standings. It was the highest points finish for a driver at Wood Brothers Racing since 1994.

Shortly after his Pocono win, Team Penske announced that Blaney would be piloting its third car for the 2018 season. Many thought that was what Blaney needed to be a consistent winner and championship contender at the Cup level. He had impressed in everything he had been in. Why would he not do the same in the No. 12?

Since joining Team Penske though, things haven’t gone according to plan.  He has just three wins in 101 starts. Two of those wins came at Talladega and the other came at the debut of the Charlotte Motor Speedway ROVAL. Those three events were ones dictated as much by luck as by skill.

If you were to tell me that after the 2017 season Blaney would have just three wins in September 2020, I would have laughed. My expectations for him were extremely high, but the team hasn’t been consistent in finding victory lane, no matter how fast its cars.

It’s one thing to not win races when you don’t have the speed in the car to do it. It’s another to lose races when you have arguably the fastest racecar on the track and you can’t close the deal. The latter has been a major problem for Blaney, and he needs to find a way to correct it.

In the two previous seasons, a lot of folks pointed to his crew chief Jeremy Bullins as the reason for that. Bullins was a successful crew chief in the Xfinity Series but was not considered a top-end crew chief in the Cup garage. Team Penske made a change prior to the 2020 season, and Blaney was paired with former championship winning crew chief Todd Gordon. Gordon’s resume was much more impressive than Bullins; now, Blaney had no more excuses.

But in 2020, Blaney’s inconsistency hasn’t changed. Bullins, meanwhile, has been able to find victory lane four times this season with driver Brad Keselowski.

The No. 12 team has had speed this season. Blaney was as high as second in the standings and they won at Talladega but in this day and age running in the top ten on a consistent basis is not going to win you a championship. Stage wins and race wins are the key factor in winning the championship because they rack up playoff points which can carry you to the final race of the year if you have any hiccups in the playoffs. Blaney’s inability to close races must change if he wants to be a serious championship contender in years to come. – Clayton Caldwell

Clayton has been writing NASCAR for the last seven years and has followed the sport for as long as he can remember. He's a Jersey boy with dreams of hoping one day to take his style south and adding a different kind of perspective to auto racing.
@cgcaldwell89
Previous Eyes on Xfinity: Previewing the 2020 Playoffs
Next ARCA Preview: 2020 Sioux Chief PowerPEX 200 at Memphis 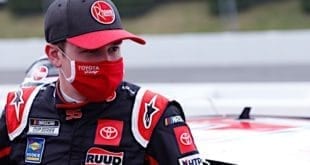