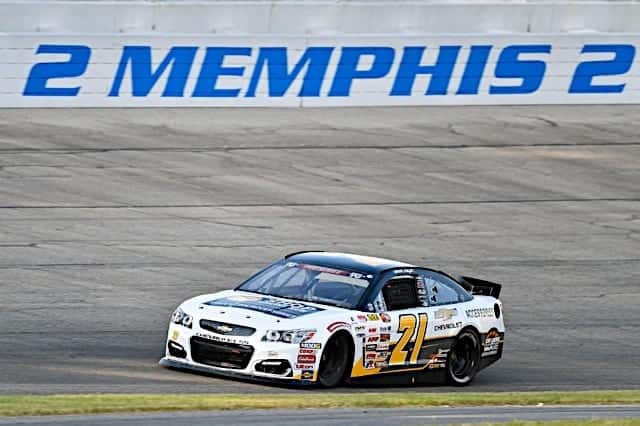 After spending the last three seasons on the ARCA Menards East Series schedule, the track was upgraded to the main series in 2020. Memphis, a track that has been under the radar for NASCAR’s return, will crown a Sioux Chief Showdown champion come Saturday.

Sam Mayer and Ty Gibbs will battle it out for that crown as Mayer holds a six-point lead over Gibbs, the driver of the No. 18, after the Bristol sweep by Mayer. Since the return from the COVID-19, these two have put on a clinic by earning a combined 10 victories. It’s only fitting that they’ll go to war for the Sioux Chief Showdown championship. Both drivers have experience at Memphis since both ran in last season’s event. Gibbs finished runner up in 2019 with DGR-Crosley while Mayer finished fourth. The past performance at Memphis could result in an exciting event as both search for their first championship in NASCAR.

Meanwhile, as the series barrels towards October, Kansas and the ARCA season finale, Michael Self took the points to lead back from Bret Holmes after Bristol and Winchester. Neither drivers have experience running at Memphis International Raceway, which means it’s a level playing field Saturday as the two will battle it out to leave Memphis with the upper hand. Self and Holmes sit third and fourth in Sioux Chief Showdown standings but neither can win the championship.

Chandler Smith has never competed at Memphis while his teammate Drew Dollar has one start, which came last season with DGR-Crosley. He’s had some disappointng runs in the last few weeks, but if Dollar can capitalize on his experience, he’ll have a leg up on the field. Smith, who had led a majority of the Sioux Chief Showdown, has had a rough go around lately that has ultimately dropped him out of contention for the Showdown championship.

Hailie Deegan has one start at Memphis in 2018 where she finished 13th in the event. Last weekend at Winchester, though, Deegan fell to her first finish outside the top 10 since Iowa after crashing into the outside wall. Meanwhile, her teammates Thad Moffitt and Taylor Gray have not made starts at Memphis in their careers. Moffitt returns to the series after being pushed to the sidelines due to funding issues. His last race was the Daytona Road Course event.

Mike Basham and Brad Smith will battle it out for the ninth position in the Sioux Chief Showdown standings. In 362 races and 27 years, Smith finally tallied his first career top-10 finish in his ARCA Menards Series career. Smith is trending towards his career-best points finish in the ARCA Menards Series of sixth, but the battle between the two ARCA veterans will be a race within the race to watch Saturday. Basham earned his career-high second top-10 finish of 2020 last weekend at Winchester and earned his career-best finish of seventh.

Entry List for the Sioux Chief PowerPEX 200 at Memphis

The Sioux Chief PowerPEX 200 at Memphis will go live at 6 p.m. ET on MAVTV and will be streamed live on the NBC Sports Gold Track Pass. Memphis is also allowing a select number of fans this weekend and tickets can be purchased by clicking the link here. Tickets start at $25.