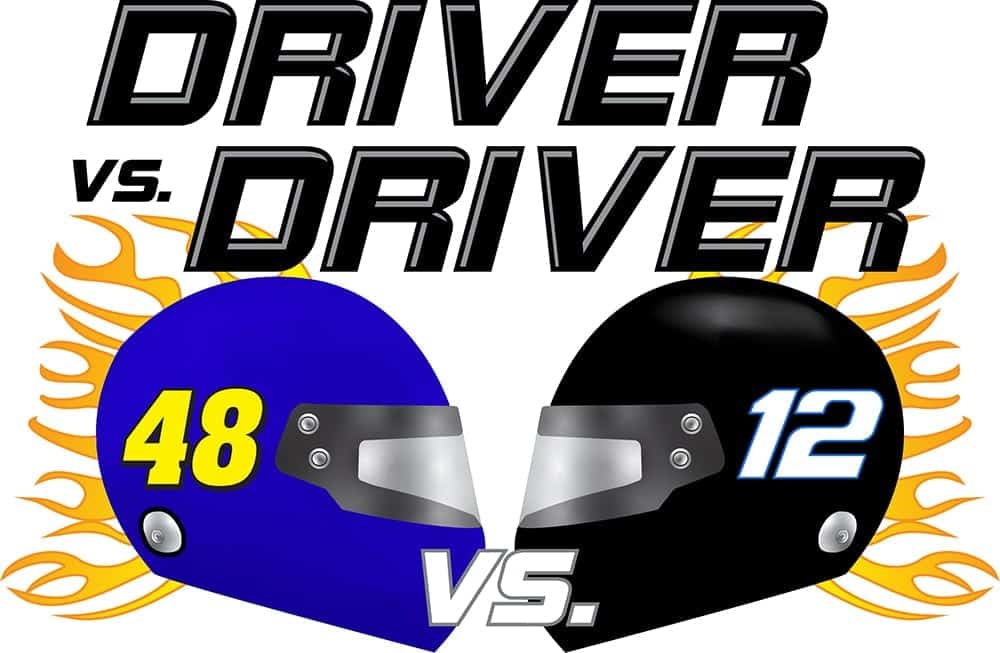 Typically, expectations for NASCAR rookies are straightforward: log as many quality laps as possible, learn how to race tracks and other drivers, find good consistency, and anything else is gravy. In September, we take a look at some of the best rookie seasons from the 21st century.

This week, we look at one of the best NASCAR Cup Series rookie battles the sport has ever seen. 2002 featured three wins by a first-year driver (a tie for the all-time record), back-to-back wins by rookies (something that’s been done just twice in the modern era), as well as a modern-era record three different rookie winners, the first rookie ever to lead driver points and a modern-era record for top 10s by a rookie.

Ryan Newman won the Rookie of the Year award in 2002; Jimmie Johnson was runner-up. But who was the better driver in his first Cup season?

In 2002, Ryan Newman was quick. Really quick. Quick enough to go out and put on one of the best campaigns that any modern era rookie contender has ever done.

Before Newman stepped into the seat of a stock car, the engineering grad from Purdue University was already a decorated USAC midget and sprint car racer, having won the Silver Crown Series championship in 1999. His accomplishments in these vehicles caught the attention of the Captain himself, Roger Penske, and was earned a partial stock car schedule in 2000 and 2001. Newman quickly made a good impression. He won in his debut with the team at Pocono Raceway in the ARCA Menards Series. In November of that year, he made his debut in the Cup Series at Phoenix Raceway, qualifying 10th but finishing 41st after suffering a blown engine. He also won the pole for the 2001 Coca-Cola 600 in just his third start, as well as finishing runner-up to Jeff Gordon in the inaugural race at Kansas Speedway that same year.

Newman started off the 2002 season well, taking home a seventh-place finish in the Daytona 500, along with scoring four top-10’s in the first five races. However, from Bristol to Talladega, he had four straight finishes of 37th or worse. Then he rebounded in a major way on All-Star night at Charlotte Motor Speedway. He won the All-Star Open, started last in the 27-car field, and ended up beating Matt Kenseth to take the win and the million dollar prize. By doing this, he became the second rookie to win the All-Star Race after Dale Earnhardt Jr. did it in 2000.

After this terrific triumph, Newman continued his stride, racking up top-5’s and top-10’s quicker than anyone’s anticipation. But that W was still the only thing missing.

Then in mid-September, his first official points-paying win finally came at the second New Hampshire Motor Speedway event, after being in the lead when the race ended under caution due to rain. This turned out to be his only win of the season. Afterwards, he scored six more top-10’s in the final nine races, ending his rookie season sixth in points. Very impressive stuff.

So the question becomes, despite Johnson having a higher average finish, a higher finish in points, fewer DNF’s, and more wins, how was Newman still able to defeat Johnson to become the 2002 Rookie of the Year?

The main key throughout their battle was consistency. Although Newman and Johnson were almost identical in the top-10 finishes they both earned (22 to 21), it was the total of top-5 finishes earned by Newman that allowed him to squeak ahead with the ROTY victory over Johnson. The 14 top-5 finishes he scored in 2002 gives him the distinction of having the highest number of top-5 runs out of any rookie contender in the modern era. He also scored six poles that year, beating Davey Allison’s rookie record of five set in 1987.

Newman’s strong 2002 rookie season propelled him into a strong 2003 season and beyond, forever dubbing his “Rocket Man” status. Over 680 starts, 18 wins, 51 poles, a Daytona 500 win, and the magnificent honor of saying that he defeated a future seven-time champion for a Cup Series Rookie of the Year title. ~Jesse Johnston

Most wins in a season by a Cup rookie. The first rookie in series history to hold the point lead. Fastest rookie to multiple wins in the modern era.

Add in more laps led in 2002 than Cup champion Tony Stewart and more top-10 finishes than seven future Hall of Fame drivers and you have not only the best rookie if that season but also arguably the finest performance by a Cup rookie in NASCAR history.

The only thing missing? The Rookie of the Year award.

But so what? ROTY Newman worked the rookie point system well and earned the award. Johnson, on the other hand, put up a season that was something more: a harbinger of things to come.

Not winning that trophy might rankle a bit, but the reality is, in the places where it really matters, Johnson put up the better season.

2002 was a remarkable year for first-year drivers. The first season in the modern era to see three different rookie winners (Johnson, Newman and Jamie McMurray, who was not even a ROTY candidate until 2003), it also marked the first time two rookies won in back-to-back weeks (Matt Kenseth and Dale Earnhardt Jr. won consecutive points races in 2000, but the All-Star Race was run between them).

Johnson’s three wins tie Stewart for the all-time rookie record. Johnson is also tied with Earnhardt for the soonest second win, which came after just 16 races.

Newman won rookie honors on the strength of consistency, and his 14 top-five finishes do easily outstrip Johnson’s six. Newman had just one more top 10, 22 to Johnson’s 21, and six poles to Johnson’s four. But three of those six top fives were wins; Newman won just once that season.

Johnson also topped Newman in a handful of other important categories.  He led 838 laps, more than champion Stewart’s season total, to Newman’s 754. Johnson’s average finish was 13.5, a full position better than Newman’s 14.5, and that was good for fifth in points for the year to Newman’s sixth. Johnson finished more races (33 to Newman’s 31) and finished on the lead lap more often, completing 650 more laps on the year than Newman did.

Newman had more poles and a much higher average start than Johnson, but at the end of the day, how well you qualify only matters if you can get the finish to go with it. Newman has gone on to score 51 Cup poles to Johnson’s 36, but Johnson won three times as many races as Newman as rookies and just over four times as many since.

In other words, Newman was great on track by himself, but Johnson was better when there were other cars out there.

Johnson’s 2002 rookie season might not have netted him Rookie of the Year honors, but it set the gold standard for first-year drivers. ~Amy Henderson