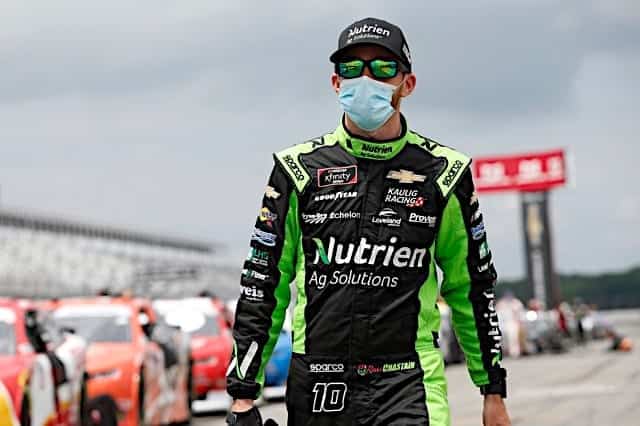 Should NASCAR do something about lapped cars affecting the end of a race, or was Kyle Busch just blowing off steam in the NASCAR Cup Series event at Bristol Motor Speedway?

Luken Glover: This is something that has crossed my mind in recent weeks and still is tough to answer. Kyle Busch was blowing off some steam at Bristol, but a couple of lapped cars did stay in his lane. The big goal for a lot of these small, underfunded teams is to complete a race in one piece. For some, a top 30 is a win. It helps with sponsorship dollars and not spending too much on repairs. However, we’ve seen lapped cars seemingly getting passed every 10 to 20 laps, especially at short tracks. Depending on the track, NASCAR should review a car who is 10 laps down or more based on their speed. If a car is a handful of laps down and staying in the path of least lap cars, they should be black flagged.

Zach Gillispie: While there is a larger speed differential throughout the field than there have been in years past (which is a whole other topic for another day), it is not like lapped cars have never existed before. Busch has been wrecked by lappers and has been aided to victory by them as well. They are a part of racing, and Busch has steam coming out of every ear, nostril, pore and everywhere else at this point when you look back his 2020 season so far.

Mark Kristl: Yes to both. Busch was frustrated; he lacks a win, has struggled this season and it is the playoffs. NASCAR needs to examine its minimum speed for races. To Busch’s chagrin, though, even if NASCAR raises the minimum speed, it should not take effect until next year.

If Kevin Harvick doesn’t win the Cup title, would you consider his season the best ever by a non-champion?

Gillispie: Not yet, at least. In 1954, Herb Thomas finished second to Lee Petty in the championship but collected 12 wins in the process. In other words, Thomas won 33.43% of the 37 races contested that year. That is pretty remarkable until you consider that he had a career winning percentage of 21.05%. However, Harvick is not too far off the pace of Thomas’ 1954 campaign. With a current winning percentage across this season sitting at 31.03%, a few more wins could put him in the same company. Now, these two raced in a completely different era, but Thomas also had an average start of 3.5, eight poles and led more than 500 laps than anyone else.

Kristl: Yes. Harvick is having a historic season at age 44. If he does not win the championship, it will still have been an outstanding year, especially with all the changes due to the COVID-19 pandemic.

Glover: Absolutely; it would be a tough pill to swallow for that organization if he doesn’t win the title. He already has top fives in over half of a full season, with 19. His current average finish is the best since 1998, when Jeff Gordon averaged a 5.7 (Harvick’s is 6.4). There’s still a mathematical chance for him to reach Gordon’s modern-era record for most wins in a season. This has been a performance for the ages, and it’s not over yet.

Was Ross Chastain the best choice for the Chip Ganassi Racing No. 42?

Kristl: It was a natural fit. Ross Chastain was already under contract with CGR, he is personable and has been successful in both the Xfinity and Gander RV & Outdoors Truck series. This Xfinity season, he has 23 top 10s in 26 races. Chip Ganassi proudly says he likes winners. Chastain can become a Cup winner.

Glover: I believe so, and while Erik Jones makes a good case, Chastain was CGR’s best bet. Chastain has a unique personality and brings a lot of effort and pure talent. His story up the ladder is a feel-good one, and not too many drivers work harder than him, it seems. He gets a lot out of his equipment and has had a relationship with Ganassi for a couple of years now. Chastain can bring the same excitement and aggression that Kyle Larson had in that car.

Gillispie: It is hard to say since Chastain doesn’t have any experience in a competitive Cup car besides three disappointing efforts in a Roush Fenway entry earlier this year. So his measuring stick against other candidates, including Jones, Bubba Wallace and Daniel Suarez is distorted. Still, the tenacity, determination and aggression he has delivered in lower-level competition are right up Ganassi’s alley. No wonder CGR held up its end of the bargain that began over two years ago.

Is Sam Mayer that good, or was his Truck win at Bristol a product of superior equipment?

Gillispie: The Trucks never cease to perplex us. With so many competitive trucks and so many talented drivers, you might as well just pick a winner out of a hat. The fact that Sam Mayer can rightfully challenge his fellow talent and succeed so fast is the mark of something good. Although his experience may be a concern even as he is already being rushed up to the Xfinity Series, a less-competitive field in that tier will suit his future successes.

Glover: The equipment is strong, but Mayer is for real. He just beat some very experienced drivers in his seventh Truck start. In 22 ARCA starts, he has five wins, 18 top fives and 20 top 10s. He shouldn’t be rushed, but with proper training, this kid has the potential to be something special.

You can’t judge Ross Chastain based on what he did at Roush Finway while filing in for Ryan Newman. Based on the teams’ performance this year, those cars are not competitive. A good driver can only do so much when the equipment is not up to par.

I think Ross Chastain will be fine. Nice to see someone get a Cup ride not by $$$$ or nepotism, but by actually earning it.

Chip sees the enthusiasm in Ross that he saw in McMurray.

Kyle and all you need to stopped belittling the lap cars. They are doing their best. Also they are specifically told to hold their line as the lapping car is suppose to go around. There is no need to legislate these issues.