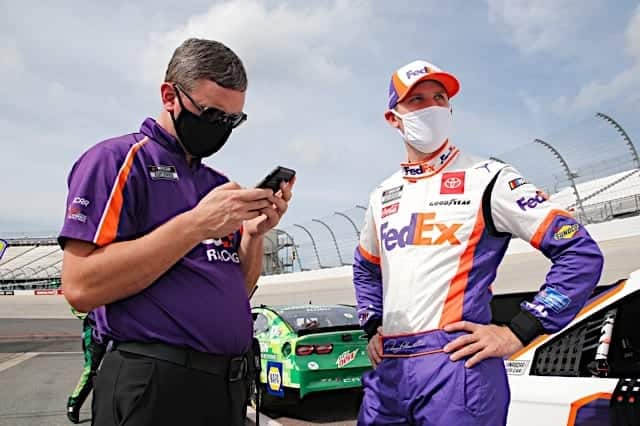 Early in the 2020 NASCAR Cup Series season, it was already clear that there could be a lot of changes on the horizon. With Jimmie Johnson announcing his retirement, the Hendrick Motorsports No. 48 would have an open seat, and several other drivers’ contracts were up at the end of the season as well. Kyle Larson was let go from the Chip Ganassi Racing No. 42 during the shutdown. Brad Keselowski re-signed with Team Penske, ending speculation that he was on the move, and Bubba Wallace announce that he wouldn’t seek a new deal with Richard Petty Motorsports. Germain Racing and Leavine Family Racing indicated intent to leave the sport at season’s end.

But it wasn’t until Monday night that a couple of tweets blew silly season wide open. Basketball great Michael Jordan and Denny Hamlin announced a new team, with a charter secured from Germain and driver Wallace. Surprise!

The Jordan-Hamlin venture has been the worst-kept secret in NASCAR thanks to social media speculation. And frankly, that kind of put a damper on the actual news.

Fans and media alike have become accustomed to the instant gratification provided by Twitter, Instagram and Facebook. Fans see team releases at the same time journalists do, straight from the teams themselves. They can interact directly with drivers and teams, allowing a level of intimacy not available before. That’s all great, right?

Yeah, except, maybe it’s not.

We’ve become a society used to instant gratification in 280 characters or less. We don’t have to wait for news before it’s thrown at us, along with everyone’s opinion on it. It’s easy. Information is available with a quick search and a few clicks, which is certainly faster and less cumbersome than searching through piles of printed material, which has to be replaced as information becomes outdated.

One time, as a pre-teen, I accidentally uncovered my parents’ hiding place for my Christmas present. It was a stereo with dual cassettes and a turntable (I’m dating myself, and yeah, it’s not pretty), just what I wanted. The trouble was, the instant gratification of that knowledge made Christmas morning kind of a letdown.

The instant gratification of social media feels the same way. Nothing’s a surprise anymore. There’s nothing to build up to.

There was a time when the now-defunct annual media tour was the highlight of a long, dark winter. Teams would reveal new sponsors, drivers would have something to say for the first time in weeks. Cars were unveiled in all their colorful, shiny glory. Tracks made announcements, too. It was something to look forward to.  It was NASCAR’s Christmas Day.

And there was more; at the track, teams would hold press conferences to announce new sponsors and drivers. There was something to speculate about for a day or two, a juicy rumor to chew on. Fans waited for RPM Tonight or even SportsCenter to see what the fuss was about.  Later, they waited for the article on their favorite Internet outlet, which was faster but still worth waiting for. Sometimes there was an inkling ahead of time thanks to Jayski, but until the team met the press, you didn’t know. It was kind of a delicious feeling.

You know what?  I really miss that. I miss the anticipation, looking forward to race weekend to see what the news was, watching RPM Tonight religiously along with any other racing news programs on the airwaves, reading Winston Cup Scene for more in-depth analysis.

Now things seem over before they begin. Drivers post on their platform of choice year-round, every bit of information goes out immediately and it’s nonstop.  There’s always a new post about racing from someone.

There’s nothing wrong with that, not really. Information is distributed efficiently; fans can be engaged on many levels with people in the sport from journalists to owners and drivers.

Yep. There is a huge downside to the way things have morphed as a result of social media. We have definitely lost something that we will probably never get back.

I MISS HAVING THE SAME SPONSOR AND CAR COLOR SCHEME FOR THE ENTIRE SEASON. SOMETIMES IT’S IMPOSSIBLE TO FOLLOW A DRIVER WHO CHANGES HIS STRIPES EVERY RACE !!

The world has changed, and in isolating, impersonal ways. Phone calls are answered by recordings, we work from our homes, and have our material needs dropped off on the front porch. Social media, with the lack of civility and accountability that anonymity brings, has become our interactive window to society. I agree that we’ve lost something vital to our needs in the process.

NASCAR is no longer a “sport”. NASCAR is a “sport” in the same way that WWE Wrestling is a “sport”…, they’re entertainers. Sure, they keep in shape and drive their butts off (or, not…), but so did the drivers of yesteryear. Heck, some drivers used to smoke cigarettes during races in cars that handled a helluva lot worse than today’s cars. So, just how much is really in preparation for racing?

I say all of this because the bottom line isn’t “sport”; it’s money. Both drivers and team owners go where the money is. Case-in-point, Ryan Blaney at Penske; personally, I don’t think that’s a good fit for him, but Penske has great equipment because they have a ton of money. Bubba Wallace’s new deal is a farce. It’s totally about money. How do I know? Name one driver/team owner who has started a new team without a 3-5 year period of growing pains. If all the players in Bubba’s new deal think they’ll have instant success, they’ve got another thing coming, especially with a mediocre driver (just look at the stats).

I have a sad feeling that the “instant gratification” of information available on the internet has been a major detriment to not only NASCAR, but our entire nation.
Suck it up buttercup. Anticipation does have it’s positives.