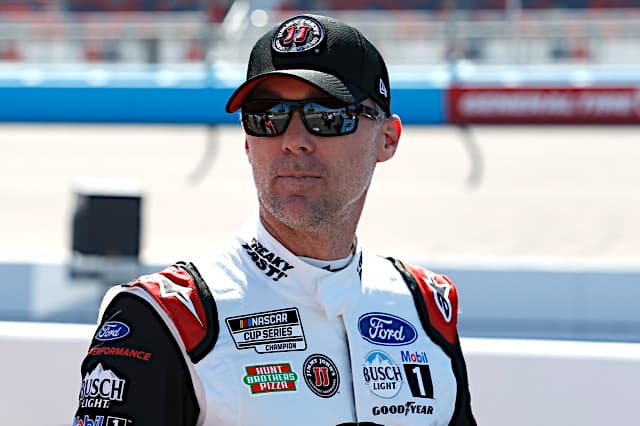 With nine wins in the 2020 NASCAR Cup Series season after his Bristol Motor Speedway victory last weekend, Kevin Harvick stands at the precipice of accomplishing something no driver has in well over a decade: a win column that breaks into the double digits.

And with the way 2020 has gone for Harvick and the No. 4 crew, it seems like a certainty it’ll happen. Seven races remain in the season, and Harvick has to win just once to score the ever-elusive 1-0; it’s not like he has just a race or two to do it. He’s also the hottest driver on the circuit in a playoff setup that champions wins over all else. Even if Denny Hamlin, who, for a time, looked like he could snag 10 wins on the year earlier in the season before a recent late-summer stretch that makes him appear a bit more human, was able to rebound, chances are Harvick will sneak into victory lane at least once.

There have certainly been seasons over the past decade that have felt fairly dominated by a single driver, years where the racer ultimately hoisting the trophy in November seemed the byproduct of the culmination of an exceptional season. But in the Cup Series, no driver has won at least 10 races in a season since Jimmie Johnson did it in his 2007 championship run, landing on exactly 10 victories by season’s end.

So it’s been a while. But there’s more to it than that. In NASCAR’s modern era, which began in 1972, 16 times has a driver won at least 10 races in a single Cup season. The all-time record is actually in reach for Harvick, too; he’d only need to win just under half the remaining events this season to tie it.

The players here? Richard Petty and Jeff Gordon. In 1975, Petty scored 13 victories en route to his sixth of seven titles. Gordon did the same in 1998, winning 13 and landing championship No. 3. (For the record, Petty also boasts the all-time single-season wins record in Cup, a whopping 27 victories in 1967. The seasons were altogether much longer then, which is part of why statistics such as this tend to only refer to the modern era rather than going all the way back to 1949. It’s likely an unbreakable record unless the series expands its schedule; imagine someone winning 28 of the 36 Cup races in a season nowadays.)

Those are the drivers on whom Harvick’s sights are ultimately set. But he’s also got a score of others to get past on the way. With 12 wins apiece in 1981 and ’82, Darrell Waltrip is next after Petty and Gordon. Then three drivers claimed 11 in a modern-era season: David Pearson (1973), Bill Elliott (1985) and Dale Earnhardt (1987).

2020 marks 13 years since the last driver with 10 wins in a Cup season, by far the longest streak without one in series history (it took nine years between Gordon in ’98 and Johnson in ’07). And it’s undeniably exciting to see that that stretch is likely to be broken; if nothing else, it makes Harvick’s season one that’s easier than in recent years to point to as a legendary season.

At the same time? Of the other 16 seasons, only Johnson had to contend with doing so during a playoff-style setup, and only Harvick is doing so with an elimination. There’s a scenario in which he wins during the Round of 12 but falters in the Round of 8, ultimately missing out on a title. And that would be quite the story for NASCAR fans and historians to tell if it were to happen.

The whole season is just strange and weird. The whole 2020 is just insane. I dunno, nobody gets practice, etc..and yet Harvick thus far has 9 wins. Hamlin who hasn’t had a good run in years has what 6 wins? Strange times and days indeed. Horrible season, horrible year. Just to freaking weird for so many, many, many reasons.
The world has gone insane………

Well maybe after the election, things will get back to the “old normal”. Time will tell.

Lol what? Denny Hamlin is always consistent and has won.

Harvick will end with at least 11 wins.

No matter who does what this year it will always have an asterisk due to all the Covid related changes that have made the season different from all others.
What would really suck is if Harvick doesn’t win the championship after such a dominating season. It would show just how stupid the whole playoff, crapshoot 1 race finale really is.

There were drivers with many more wins than the competition who were denied Cup Championships under the old system as well. The current system rightly places a higher priority on winning than the Latford system did.

Yeah but Harvick has killed it all season. He had the most points during the regular season (and up to current), best average finish 6.2 (Hamlin has a 9.6), most laps lead 1416 (Keselowski has 915) , most wins, most top 5s most top 10s. In other words he’s killing it.

So my observation that “What would really suck is if Harvick doesn’t win the championship after such a dominating season. It would show just how stupid the whole playoff, crapshoot 1 race finale really is.” is right on and has nothing to do with the Latford vs Chase vs Playoff format

The bottom line is that Harvick is killing it this year, is head and shoulders above the rest of the field, and if he doesn’t win the championship it will shine a bad light on the one race crapshoot championship format.

Arguing out of both sides of your mouth again, Bill?

You say your concern is not based on a specific championship format. However, under the old Latford system, and to a lesser extent, the old Chase system, Harvick would already be near to clinching his championship. He’d be “cruising for dollars” right now instead of going for wins.

My comment was not trying to favor any of the formats. My only point was that Harvick is having such a fantastic season that he should win the championship under any format. And if he doesn’t then the format is flawed.

A lot of things in life aren’t “fair.” Like it or not, sports are entertainment, not a search for justice. The people who run NASCAR wanted to get away from a scenario where the champion was determined well before the last race of the year. And the drivers know the rules before they choose to compete.

The Playoff system hasn’t yet given us an undeserving champion. If you look down the list since 1973, the drivers who stand out for NOT having had outstanding seasons compared to the rest of the field were Matt Kenseth, Terry Labonte (twice), Alan Kulwicki and Benny Parsons. Those were all under the Latford system, so all any of this proves is that there is no perfect way to crown a champion, but that the Chase and Playoff systems have not failed as badly as what came before.

OK. The last sentence drills down on what my point was in all my comments above….

THIS YEAR, given how dominating of a season Kevin Harvick has had, the system will have failed if he doesn’t end up being the champion.

I will concede that if Harvick does not win the Championship it means the system didn’t reward the best overall performance. However, that’s only part of what a championship system is designed for. The Playoff system will probably still be successful in providing a more entertaining conclusion than if Harvick were to clinch weeks before the last race.

I bet it would really be entertaining to people if they could vote people out each round via text.

That one race playoff is dumb as hell. This isn’t baseball or pinball…..errrr football. Jo. The champion needs to be the mkst consistent driver over an entire year…not one race where the other 3 drivers that don’t win may be inconsistent. Do you spend lots of time on your cellphone with a 30 minute attention span?

Sorry to disappoint you Josh, but I hardly ever use my cellphone. But I do happen to believe that the point of any sport – even a questionable one like NASCAR – is to win! Points racing sucks and always has.

Remember when William Byron didn’t win the Truck Series after dominating the whole season? I don’t think he made it to the final four.

BTW, it pains me to say this because I was a Gordon fan but Harvick is also in line to challenge the most top 10s in a season as well. The current record is 30 top 10s set by Gordon in 2007. (He had close to a 300 point lead before the points reset and received no benefit from having such a spectacular season once the chase started).

I have never liked Harvick but I can’t deny how great of a season is currently having. It is, without a doubt, one of the best seasons anyone has ever had.

It gets easier when you have good equipment already, no practice and the field is set by previous performance instead of the fastest lap. The whole complexion of each race has changed with these new rules. Don’t believe me? Ask Kyle Bush…

That’s exactly why there will be an asterisk after everything that happened this year. Maybe it was easier, maybe it was more difficult, regardless it was definitely different and abnormal compared to every other year which is what an asterisk denotes.

The baseball and hockey and basketball “seasons” deserve and asterisk too.

He is a good driver as evidenced by the 2007 Daytona 500 win, the win at Darlington and many of his others. He was a good driver in Childress “give my grandbabies a ride” cars. Maybe you should watch the entire race instead of the cautions and dictated gwc at the end.

I guess your attention span ran out early this year, Josh. We’re having far fewer cautions overall and fewer GWC finishes this year.

If your boy runs well at his best track under the pressure of the Winner Take All format, he’ll get his second Championship.