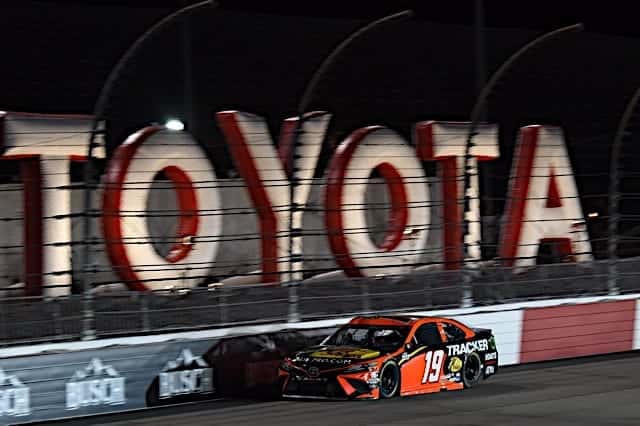 The NASCAR Cup Series begins the Round of 12 at Las Vegas Motor Speedway on Sunday, Sept. 27. Which playoff driver’s gambles will pay off for your NASCAR DraftKings lineup? Let’s find out!

Cup drivers return to the 1.5-mile tri-oval for the first time since February, before the pause in competition due to the COVID-19 pandemic. Joey Logano captured the victory in that event after leading 54 laps. This week, he’ll start close to the front but Kevin Harvick will lead the field to green in the 267-lap race. Once again, all playoff drivers automatically start in the top 12 spots; keep that in mind when looking for bonus points on your roster.

LVMS also marks the first event on a 1.5-mile track since July 23 at Kansas Speedway. Goodyear is bringing a completely new set of right-side tires for this race, one that has more grip and reduced tire wear. Per usual at tracks of this length, cars will utilize the lower horsepower package with aero ducts.

In order to cash your DraftKings contests this week, you will want a combination of lap leaders and drivers who finish well ahead of where they began. In fact, in the Pennzoil 400 in February, much of the top 10 consisted of drivers who began in the teens and 20s. According to Linestar, four of these competitors were in the perfect DraftKings lineup; all four were under $8,000. Could a similar result happen this week? If you think so, adjust your roster accordingly.

Before you see who I’m playing this week, let’s review the results from Bristol Motor Speedway.

Bubba Wallace was running within the top 15 until an untimely caution left him mired in the 20s for the rest of the race. Also, Austin Dillon didn’t lead any laps, like I hoped he might, and finished seven spots below where he began. Still, this lineup did very well on DraftKings.

The score of 326 earned $2 in the $1 Happy Hour tournament and cashed the single-entry double up.

Note: The following is a sample NASCAR DraftKings lineup for Sunday night’s race; you can use this information to create your own.

Recently, the No. 19 Joe Gibbs Racing pilot had a string of good results, posting nine top fives in the past 11 races. Additionally, he scored 44 or more DraftKings points in all but one event in that stretch. Even though Truex finished 22nd at Darlington Raceway, he still scored 100 DraftKings points.

At Kentucky Speedway, Truex nearly won after battling with several others for the lead late in the race. Cole Custer snuck around him on the outside to capture the victory, but Truex still ended runner-up after leading 57 laps. He’s sure to be a favorite to win this week, but he’ll have to beat Harvick, who’s been on a tear lately. Truex starts 11th on Sunday and would be a solid foundation for your roster.

Logano is also heavily favored to win, as his victories came within the past three races. He’s also earned nine consecutive top 10s at the “Entertainment Capital of the World.” One thing that’s especially important for DraftKings users is the ability to lead laps, and Logano certainly fits the bill. He’s led 486 total laps in the previous nine events at Las Vegas. 105 of those came last fall.

Not only has Logano performed well at this track, but he also has run well this season. Since the All-Star Race, the No. 22 Team Penske driver grabbed five top fives and nine top 10s. He’s also scored at least 30.5 DraftKings points in all but two races in that stretch. However, 50 fantasy points would be more ideal for his salary this week. Look for Logano to lead laps again at one of his better tracks.

I hesitated putting Blaney in my lineup, but I couldn’t overlook one noteworthy item from my research. According to Linestar, Blaney was in the DraftKings perfect lineup in six out of eight races at 1.5-mile tracks this year. The two he wasn’t in were at Las Vegas in February and at the most recent 1.5-mile track: Kansas. At Texas Motor Speedway, he led 150 circuits and had 86 quickest laps before crossing the finish line seventh. These bonus points boosted his DraftKings score to 112.5.

Though Blaney has yet to win at Vegas, he did finish fifth last fall and in both events in 2018. Logano’s Penske cohort also ended the race sixth in 2016 and seventh in 2017. Blaney led 19 laps in February and recorded 18 fastest laps as well.

The No. 12 Ford Mustang wheelman was knocked out of the playoffs earlier than he had hoped, but he could still help you win your DraftKings contests if he scores well.

Like Blaney, DiBenedetto didn’t make it into the next round of the playoffs. However, he could still help you turn a profit on DraftKings. In each of his seven starts, DiBenedetto has finished farther up than where he qualified. Notably, the No. 21 Wood Brothers Racing pilot was runner-up to Logano in February after starting 19th.

Where does he begin Sunday’s event? In 19th.

DiBenedetto gave Custer a push at Kentucky to help him get to the lead. DiBenedetto ended up third as a result and earned 50.3 DraftKings points. Additionally, he scored 52.5 fantasy points at New Hampshire Motor Speedway in August (sixth). Though DiBenedetto hasn’t earned a top 10 in the past seven races, he could turn things around this week and get a high score on DraftKings.

Dillon tends to wind up higher than where he starts, a trend which is just right for this salary. Earlier this year, he gained 14 positions to finish 10th at LVMS; he also ended 11 spots higher last fall in his 16th-place effort. Last week at Bristol, Dillon ended 18th after starting 28th, which increased his DraftKings score to 36.5. At Kansas, Dillon gained 21 spots to slot in 15th, though that result was mostly due to attrition. Finally, at Kentucky, he totaled 45 DraftKings points with a 16th-place result.

These key stats could be important for Dillon, as his No. 13 Germain Racing team has sold its charter to a new team headed by Michael Jordan and Denny Hamlin. For now, though, he’ll still provide good value for DraftKings users.

Like Dillon, Suarez will also leave his Gaunt Brothers Racing No. 96 team at the end of the season, though this departure was his choice. He’s a resourceful driver who tends to get as much out of the car that he can. He’s gained as much as 19 spots since July, though lately he’s only gained no more than three to four positions a race in the last month or so.

Still, in the last three 1.5-mile events, Suarez scored 29, 35 and 45 DraftKings points. That’s very good value for a sub-$6,000 salary, and he could be what you need to fit in several higher-tiered drivers.