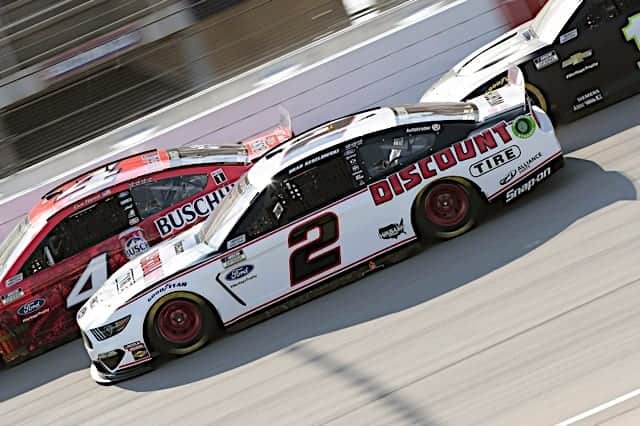 Four down, 12 drivers remain in the NASCAR Cup Series playoffs! Who will secure their spot into the Round of 8, and in turn help you cash your FanDuel contests? Read on to see my picks for Las Vegas Motor Speedway.

The Round of 12 consists of three very different tracks, starting with the 1.5-mile tri-oval. Then, they’ll race at Talladega Superspeedway and the Charlotte Motor Speedway road course the following weeks. For now, drivers have their minds set on Sin City.

Cup teams first visited LVMS in February, before the break for the COVID-19 pandemic. Back then, the results looked similar to a Daytona International Speedway or Talladega event, with drivers like Ricky Stenhouse Jr., Bubba Wallace and Ty Dillon filling out the top 10. I expect things to be a bit different this time around (though this is 2020, after all — anything can happen).

Here are the rules for the Daily Fantasy NASCAR FanDuel Game

Truex won this race a year ago after leading 32 laps; his first victory came in 2017 when he led 150 laps. He also led 96 circuits in the fall 2018 event before placing third in overtime. Although he had an undesirable result this past February, Truex’s statistics at this track show that he will be one to beat, even though he’s starting 11th.

He’s also performed well this year, though he has just one victory so far. The driver of the No. 19 Toyota for Joe Gibbs Racing has nine top fives in the last 11 races, including a third place at Kansas Speedway. Truex led 44 laps in that event and scored 70.1 fantasy points on FanDuel. Additionally, at Kentucky Speedway he led 57 circuits and almost won on a late-race restart. Cole Custer passed him and others on the outside to take the victory, but Truex did end just behind Custer. This effort produced 75.9 fantasy points on FanDuel. He’s sure to contend for the win again on Sunday night.

Keselowski had a rough night at Bristol Motor Speedway after leading 82 laps. A power steering issue ruined his night and left him mired back in 34th. However, he can rebound this week, as Las Vegas is one of his best tracks. In the last 10 races, Keselowski hasn’t ended further back than seventh place. He also won three times, including this event in 2018 when he led 75 laps. He should be one of your main targets because of this consistency.

Since the All-Star Race, the No. 2 Team Penske pilot has earned eight top 10s, and he captured the victory at Richmond Raceway two weeks ago. While his 750 hp stats are stellar this year, Keselowski has also done well at 1.5-mile tracks. He led 30 laps at Kentucky before crossing the finish line in second, increasing his FanDuel score to 72.2.

Prior to that, the Michigan native led 34 circuits en route to a ninth place finish and 60.6 fantasy points on FanDuel. And don’t forget his Coca-Cola 600 victory at Charlotte; he led 21 out of 405 laps and scored 89.6 fantasy points. Granted, that’s over 100 laps (and 200 miles) more than what is in the South Point 400, but it still proves Keselowski’s having a solid year all around.

Dillon is more attractive on FanDuel than DraftKings; his seventh place starting position doesn’t hurt as much if he loses a few spots at the end of the night. He won at Texas Motor Speedway earlier in the year thanks to a two-tire stop late in the race. He held off his Richard Childress Racing teammate Tyler Reddick on a couple of restarts and led 22 laps. This, combined with 10 points for position differential, increased his FanDuel total to 88.6.

Oh, by the way, Dillon also concluded the first Las Vegas event in fourth place — 17 spots greater than where he qualified. Though he doesn’t have the opportunity to gain very many positions this time around, he did start and end fifth in 2016. His salary seems awfully steep for his starting position, but Dillon should be able to stay and finish near the front.

DiBenedetto was quite a surprise back in February, earning his first ever top five at Las Vegas. He crossed the line just behind Joey Logano after qualifying 19th. While his results lately haven’t been in the top 10, he’s hasn’t ended outside 21st since August. These have kept his FanDuel scores above 40 fantasy points. Also, the No. 21 Wood Brothers Racing wheelman pushed Custer to the victory at Kentucky in July before getting a solid third-place finish. DiBenedetto may be out of the playoffs, but if he has a similar performance this week, he’ll help you win your FanDuel contests.

LaJoie is a true value play with huge position differential potential. He’ll start 31st Sunday night. In the last 1.5-mile race this season (Kansas), LaJoie gained 10 positions from that same spot. Though he was a lap down, he still scored 51.6 fantasy points on FanDuel. Additionally, at Texas he totaled 68.4 fantasy points after ending 20 spots farther than where he started.

Finally, at LVMS LaJoie ended 16th — 14 spots higher than where he began. This matched an earlier performance there in 2018, when he gained 16 positions. If he and the team can find that same kind of speed on Sunday, he would easily pay off his low salary. It would also bolster his resume for potential teams, as he announced he was leaving Go Fas Racing at the end of season. Hopefully, LaJoie will help and not hurt your FanDuel lineup.