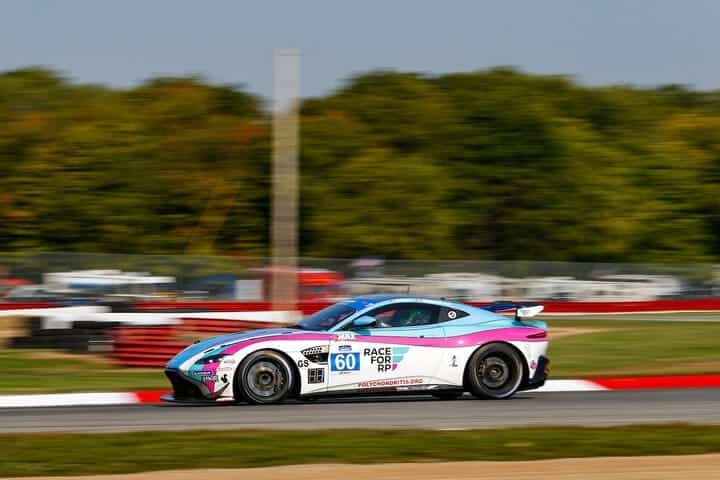 Pilot Challenge teams were on-track bright and early Friday morning at Mid-Ohio.  Defending race winners Archangel Motorsport (racing last year under the banner of Park Place Motorsports) wasted no time in putting their best foot forward.  Trent Hindman ended up fastest on the speed charts in the session with a lap at 92.843 mph in his Porsche Cayman GT4 MR.

Hindman’s lap was six-hundredths of a second faster than the Ford Mustang GT4 of Multimatic Motorsports’ Sebastian Priaulx.  Marcelli was third in his Aston Martin, followed by CarBahn Motorsports with Peregrine Racing’s Jeff Westphal.  Murillo Racing’s Eric Foss was fifth in the best of the Mercedes.

Winward Racing’s Indy Dontje was sixth quickest with the Porsche of BGB Motorsports’ Jan Heylen close behind.  Riley Motorsports’ Dylan Murry was eighth fastest, while Alec Udell in the second Winward Racing Mercedes and the Audi of Britt Casey Jr. rounded out the top 10.

Unfortunately, the weekend has come to an early end for Rebel Rock Racing, winners last time out at Michelin Raceway Road Atlanta.  Frank DePew spun off in the opening minutes of the session and damaged the sole Chevrolet Camaro GT4.R.  The damage was considered to be too severe to continue the weekend.  Given that this is a doubleheader weekend for Michelin Pilot Challenge, this will really hurt the team in the standings.

TCR competition will be a little different this weekend as IMSA has instituted a balance of performance in the class after much of the season has been dominated by the Hyundais from Bryan Herta Autosport.

The result of that balance in the opening session was that none of the Hyundais were in the top five.  JDC-Miller MotorSports’ Stephen Simpson was fastest in his Audi with a lap at 90.607 mph, good for 18th overall.

Simpson’s lap was nine-tenths of a second faster than the Alfa Romeo of Tim Lewis Jr.  Bryan Herta Autosport’s Gabby Chaves was third fastest in his Veloster, followed by Fast MD Racing’s James Vance.  Ryan Eversley in the LA Honda World Racing No. 77 was fifth.

In the afternoon session, speeds were very similar to what was posted in the morning.  Marcelli turned in the quick lap of the day just before the halfway point of the session.

Marcelli’s lap ended up being three-tenths of a second faster than Heylen.  Scott Maxwell was third in the No. 22 Mustang, while Tyler McQuarrie in the CarBahn Audi was fourth.  Turner Motorsport’s Robby Foley was fifth quickest in his BMW.

Casey was sixth fastest, followed by Hindman and Udell.  Tom Dyer was ninth in the second CarBahn Audi, while Winward Racing’s Russell Ward was 10th.

Simpson was once again fastest in TCR with a lap at 90.492 mph, good for 18th overall.  This lap was two-tenths of a second faster than Eversley.  Vance was third, then Lewis and Spencer Brockman.

This weekend’s Mid-Ohio 120 doubleheader was supposed to have 31 cars.  However, that number is already down to 28.  Rebel Rock Racing’s withdrawal cut the number of Grand Sport cars down to 19.  LA Honda World Racing originally entered three cars, but only the No. 77 of Eversley and Taylor Hagler will race this weekend.

Qualifying for the first Mid-Ohio 120 will be held bright and early Saturday morning.  TCR cars will qualify at 8 a.m., followed by the Grand Sport teams.  We’ll have a recap of qualifying here at Frontstretch mid-morning Saturday.