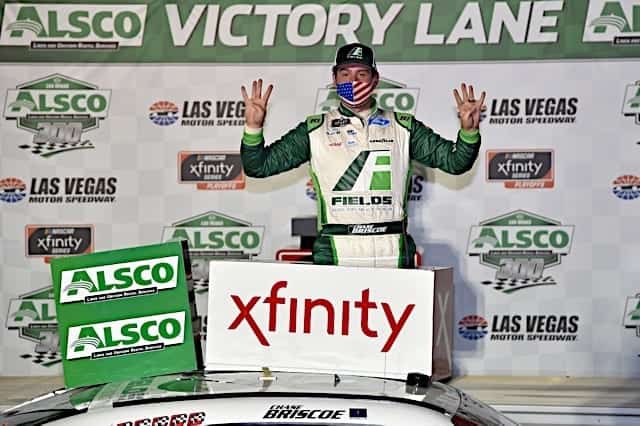 At Las Vegas Motor Speedway, Chase Briscoe hit the jackpot in the NASCAR Xfinity Series playoff opener. He swept the first two stages en route to win the Alsco 300, thereby clinching a berth into the next round.

Briscoe added his eighth winner’s sticker to his No. 98 Stewart-Haas Racing Ford with his victory at the 1.5-mile track in Las Vegas. It is his 10th career Xfinity Series win.

“First off, incredible car by everyone at Stewart-Haas Racing,” Briscoe told NBC Sports Network post-race. “Happy to bring this No. 98 Ford to victory lane. I knew if I could take the lead on the restart, I’d be good. But I was spinning the tires so bad for some reason. Credit to this Roush-Yates fast engine. We’ve had a lot of wins this year, but this has been by far our most dominant car. I’m so glad I can sleep easier this week without having to worry about Talladega Superspeedway or the Charlotte ROVAL to win.”

Before this season, Briscoe set a personal goal of eight wins this Xfinity Series season. He accomplished his goal after the 27th race of this season. He led 164 of the 200 laps in this win.

“I knew this team was capable of achieving that and more,” he continued. “I just can’t say thank you enough to Gene Haas, Tony Stewart, everyone who lets me drive these race cars. It’s been an unbelievable season.

“We still can get six more wins and a championship. That’s what we’re going to try to do. I’m so happy to start the playoffs like this.”

Outside of two single-car incidents early in the race, Briscoe set sail until late in the third stage.

On lap 9, Kyle Weatherman brought out the first caution when his No. 47 Chevrolet suffered a mechanical issue.

Gosh so frustrating the steering shaft came off the steering box. Thankful it was on the straight away and not in the corner. Thanks @MhrRacing for the opportunity. On to the next ?? https://t.co/4zmkuZly7v

The final stage had two caution flag periods: one for a loose tire in the infield grass and the second for Alex Labbe, who stalled his No. 36 on pit road.

The final restart took place on lap 191, but Briscoe never panicked. He drove away to a 1.37-second margin when the checkered flag waved.

Noah Gragson finished second, scoring the second-most points in the race with 51.

Ryan Sieg finished fifth and ran well all race. He netted 15 stage points. When he came to pit road for his final green-flag pit stop in the third stage, he attempted to get a drink of water, only to overdrive his pit stall after missing his braking zone. Nonetheless, he is nine points above the Round of 12 cut line.

With the unpredictability in the Round of 12 with the races at Talladega and the ROVAL looming, many of the playoff drivers accrued stage points in this race.

After the first race in the three-race Round of 12, Ross Chastain, Michael Annett, Herbst and Brandon Brown are the four drivers below the Round of 12 cut line.