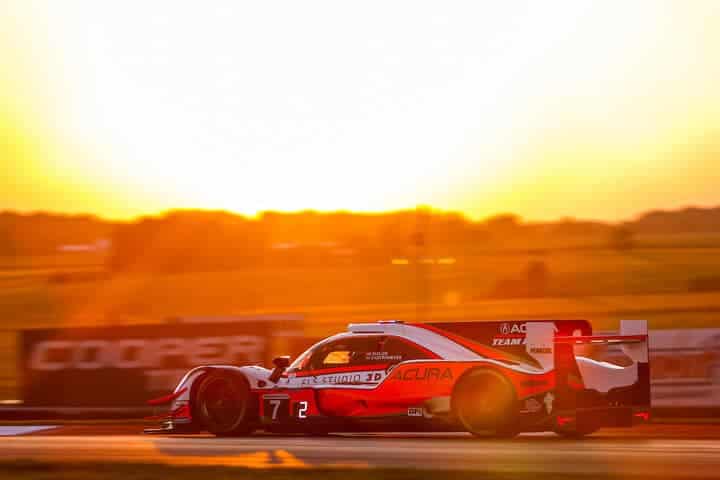 Even though Acura Team Penske is officially now a lame duck team, that doesn’t mean that they still aren’t giving it their absolute best on the track.  In IMSA WeatherTech SportsCar Championship practice at Mid-Ohio, Helio Castroneves was fastest overall with at 113.857 mph.  Afterwards, he was quite satisfied with the performance.

“[Practice] went really well,” Castroneves said after the session ended.  “Certainly Acura Team Penske continues to keeps pushing to find details and limits.  I do believe it’s great what we were able to put together.  The track is very very slippery at the moment.  It’s like you’re trying to fight for grip in every corner of the way.  We’re able to do it but it gave us a good indication and we’ll keep working.  Tomorrow I feel it’s going to be a lot faster because the track gets going.  However, we are qualifying in a different time which is a little bit earlier than usual.  But at the end of the day, it’s going to be the same [for] everyone.  [I’m] excited we at least got some direction, but we got to keep working.”

WeatherTech teams were treated to a practice session Friday evening that ran almost to sunset at Mid-Ohio.  That treated drivers to somewhat unusual sights in regards to the angle of the sun, as you can see above.

During the opening session, Juan Pablo Montoya was quickest in his Acura ARX-05 with a lap at 111.267 mph.  This lap was a quarter of a second faster than Action Express Racing’s Pipo Derani in his Cadillac DPi-V.R.  Ricky Taylor was third in the No. 7 Acura, while the Mazda Motorsports Mazda RT24-Ps of Harry Tincknell and Tristan Nunez were fourth and fifth.

GT Le Mans is depleted this weekend due to the withdrawal of Porsche GT Team due to Porsche crewmembers testing positive for COVID-19 at Le Mans last week.  Despite that, four cars are still on-site to do battle.  Corvette Racing’s Antonio Garcia was fastest in the opening session with a lap at 102.005 mph.  This lap was three-tenths of a second faster than Tommy Milner in the second Corvette.  BMW Team RLL’s John Edwards was third fastest.

GT Daytona saw Turner Motorsport’s Bill Auberlen top the chart with a lap at 99.300 mph, good for 13th overall.  Auberlen’s lap was six-hundredths of a second faster than AVS Vasser Sullivan’s Jack Hawksworth in the No. 14 Lexus.  Heinricher Racing with Curb-Agajanian’s Alvaro Parente was third fastest in his Acura, while Wright Motorsports’ Patrick Long was fourth in his Porsche.  Riley Motorsports’ Lawson Aschenbach was fifth in class.

The majority of the quickest times during Saturday’s practice session at Mid-Ohio came relatively early in the session.  Castroneves proved to be the exception to that rule.  The fastest time of the weekend came with a little more than five minutes remaining in the session.

Castroneves’ lap was two-tenths of a second faster than the Cadillac of Wayne Taylor Racing’s Renger van der Zande.  Dane Cameron was third fastest in the second Acura, while Derani was fourth.  Jonathan Bomarito was fifth in his Mazda.

Jordan Taylor was fastest in GT Le Mans with a lap at 103.330 mph.  However, things were all great.  During the session, Taylor was held up by Derani.  He had an interesting response to this.

Taylor’s lap was a quarter of a second faster than teammate Oliver Gavin.  BMW Team RLL’s Jesse Krohn was third.

GT Daytona saw AIM Vasser Sullivan’s Aaron Telitz go fastest with a lap at 101.023 mph.  This was three-tenths of a second faster than teammate Frankie Montecalvo.  Meyer Shank Racing with Curb-Agajanian’s Matt McMurry was third fastest in his Acura, while Robby Foley was fourth in the Turner BMW.  Wright Motorsports’ Ryan Hardwick was fifth quickest.

Both practice sessions were completely clean.  No red flags or spins during the sessions.

Normally, qualifying for a IMSA WeatherTech SportsCar Championship race is the day before the event.  Not so this weekend.  Qualifying will be bright and early Sunday morning at 7:55 a.m. ET.  The session will be streamed live at IMSA.com.