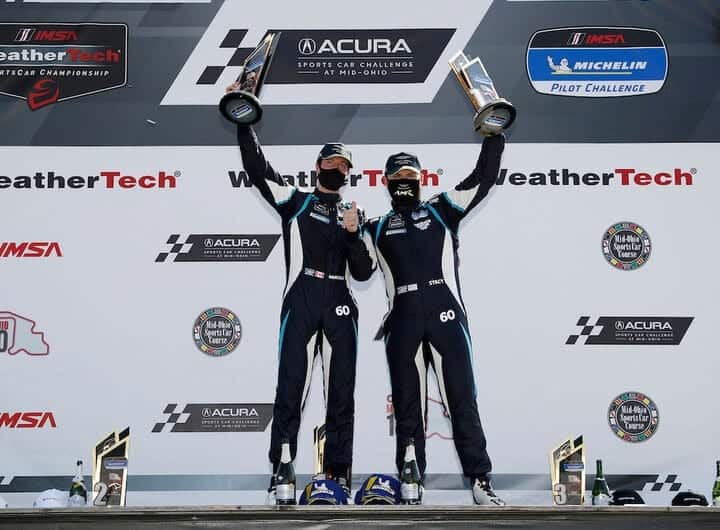 KohR Motorsports’ Nate Stacy and Kyle Marcelli continued an excellent weekend to date with the overall victory in the first two-hour IMSA Michelin Pilot Challenge race of the weekend at Mid-Ohio Sports Car Course Saturday afternoon (Sept. 26). It is the first win of the season for both drivers and the fifth overall (the duo have raced together since 2018).

Stacy had won the pole earlier in the day and nailed the start to pull ahead of CarBahn Motorsports with Peregrine Racing’s Tyler McQuarrie. McQuarrie was every bit as fast as Stacy and spent much of the first half of the race hounding Stacy’s Aston Martin. At the same time, Stacy and McQuarrie pulled away from Murillo Racing’s Jeff Mosing in third.

Defending race winner Alan Brynjolfsson had high hopes for a good run, but any chance for a good finish ended 21 minutes into the race. Brynjolfsson was leading a group of drivers fighting for 11th when James Cox got in the back of Fast Track Racing’s Chandler Hull entering the Keyhole. Hull bounced into Brynjolfsson, spinning the Archangel Motorsports Porsche into the sand trap to bring out the race’s first full course caution.

Brynjolfsson was pulled out of the trap and resumed. A strong charge in the second half of the race by Trent Hindman got the No. 7 Porsche back on the lead lap, but they ended up 17th overall, 14th in Grand Sport.

The initial contact did not hurt Cox’s Mercedes. However, Cox then hit Brynjolfsson head-on as the VOLT Lighting Porsche was sliding into the trap. This contact damaged the front end of the Mercedes significantly and punctured the radiator. That ended their day.

The rough-and-tumble action continued after the restart when Motorsports In Action’s Sheena Monk went too fast into the Keyhole and spun out BimmerWorld Racing’s James Clay. Monk ended up serving a drive-through penalty for avoidable contact. The next lap saw Michael McCann Jr. do something similar and fly into the side of Turner Motorsport’s Vin Barletta. The contact ended McCann’s day as his Audi suffered a suspension failure.

The first yellow resulted in a split pit strategy in the Grand Sport class. The leaders stayed out, but a number of others stopped for fuel. That meant that when Stacy pitted just before the halfway point, Robby Foley took the lead in the Turner Motorsport No. 95.

Marcelli then got hit by Bryan Herta Autosport’s Ryan Norman, which allowed the CarBahn Audi with Jeff Westphal at the wheel to jump past. However, Marcelli, racing on hot tires, got the advantage back quickly.

Shortly afterwards, a caution came out after KMW Motorsports with TMR Engineering’s Tim Lewis Jr. blew his engine and put oil down on track. That effectively ruined Turner Motorsport’s strategy as both of the yellow BMWs had to pit under yellow. Everyone stopped here to take fuel at minimum. Marcelli had issues getting fuel into his Aston Martin, which allowed Westphal to win the race off of pit road. Murillo Racing’s Eric Foss decided to chance it on fuel mileage by staying out to take the lead.

The fueling issue dropped Marcelli to seventh with 40 minutes to go when the green came back out. Foss and Westphal fought hard for the lead, but the orange and black Mercedes was able to stay out front.

Marcelli took only a couple of laps to get back up to third, then quickly passed Westphal for second. Westphal wasn’t taking that sitting down and took the spot back a couple of laps later by taking the outside line up the hill at the end of the backstretch. In the final 20 minutes, Marcelli got him back and put the pressure on Foss.

Foss couldn’t make it to the end on fuel but still made it tough on Marcelli. The pass for the win took place entering turn 1 with 13 minutes to go as Marcelli put his Aston Martin to the inside of Foss. Foss tried to fight back, but he more or less got nerfed off the track in the process.

Once out front, Marcelli opened up a solid lead and held on to take the win.  The margin of victory was 1.31 seconds over McQuarrie and Westphal. Winward Racing’s two cars were third and fourth. Russell Ward and Indy Dontje ended up ahead of Bryce Ward and Alec Udell. Multimatic Motorsports’ Scott Maxwell and Sebastian Priaulx were fifth.

Foley and Auberlen ended up sixth in their BMW, while BGB Motorsports’ Jan Heylen and Thomas Collingwood were seventh. BimmerWorld Racing’s Nick Galante and Dillon Machavern just barely beat out PF Racing’s Chad McCumbee and James Pesek for eighth, while Mosing and Foss had to settle for 10th after pitting in the final six minutes for fuel.

In TCR, it was simply Fast MD Racing’s day. Max Faulkner started from the pole and was able to pull away from the pack. KMW Motorsports with TMR Engineering’s Roy Block was able to get by Bryan Herta Autosport’s Michael Lewis on the first lap to take second and did all that he could to simply keep pace with Faulkner.

Faulkner led right until he made his only stop of the race at the halfway point. That gave the lead to Lewis, who had stopped during the first full course yellow and was on an alternate strategy. When Lewis’ Alfa Romeo turned traitor, he stopped under yellow to make his mandatory stop.

The stops put the the No. 23 Audi back up front with James Vance at the wheel. He had LA Honda World Racing’s Ryan Eversley right on his tail, along with Roadshagger Racing’s Jon Morley. The action up front was close at first, but Vance was able to slowly pull away from his competitors to take the class win.

Faulkner and Vance ended up 12th overall, on the lead lap at the finish. They ended up 8.517 seconds ahead of Eversley and Taylor Hagler, who earned their best finish of the year to date. Morley and Gavin Ernstone were third in their Audi, followed by Bryan Herta Autosport’s Parker Chase and Spencer Brockman in the best of the Hyundais, slowed by an extra 60 kilograms (~132.28 pounds) of added weight. Lewis and Mason Filippi ended up a lap down in fifth.

Given the unusual weekend schedule, this is not the end of Michelin Pilot Challenge for Saturday.  Teams are scheduled to qualify later today for Sunday’s second race of the weekend. That session is scheduled to take place at 6:50 p.m. ET. We’ll have a recap of that for you later on here at Frontstretch.