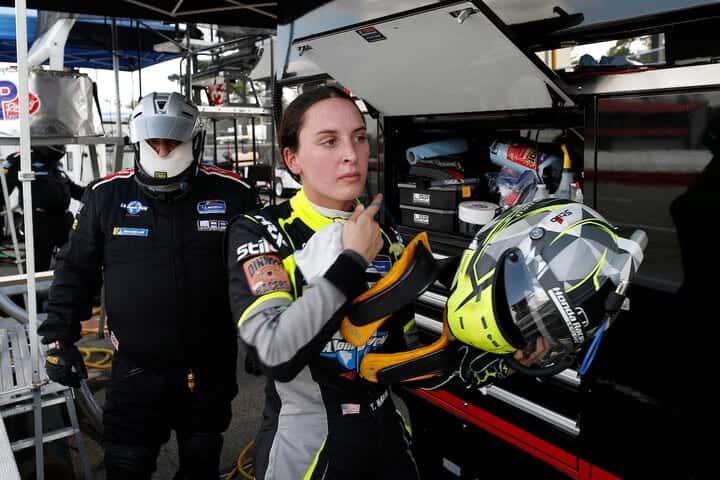 After claiming overall victory earlier on Saturday, KohR Motorsports’ Nate Stacy made it clear in the second qualifying session of the day Saturday that he and teammate Kyle Marcelli are going after the weekend sweep. Stacy won the pole for the second half of the Michelin Pilot Challenge doubleheader with a lap at 93.524 mph, the fastest lap of the weekend.

Stacy’s lap was only eight-hundredths of a second faster than CarBahn Motorsports with Peregrine Racing’s Tyler McQuarrie. Winward Racing’s Russell Ward will start third in his Mercedes, followed by Scott Maxwell in the Multimatic Motorsports Ford and Turner Motorsport’s Robby Foley.

In TCR, a strong lap right at the end of qualifying at 89.725 mph resulted in LA Honda World Racing’s Taylor Hagler (pictured above) taking her first career IMSA Michelin Pilot Challenge class pole in only her sixth attempt. Hagler’s lap was only a hundredth of a second faster than KMW Motorsports with TMR Engineering’s Roy Block. The KMW team was able to replace the engine on their Alfa Romeo after an expiration ended their first race early.

Race winner Max Faulkner will start third in his Fast MD Racing Audi, while Mark Wilkins will start fourth in the best of the Hyundais. Roadshagger Racing’s Gavin Ernstone will start fifth.

The only one of the 28 teams that failed to record a lap in qualifying was JDC-Miller MotorSports’ No. 54 Audi RS3 LMS Club Sport for Michael Johnson. The car dropped out of the first race earlier in the day with mechanical issues that the team was still trying to fix at the time of the qualifying session. If they’re able to repair the No. 54, Johnson will start at the rear of the field.

The second half of the IMSA Michelin Pilot Challenge doubleheader is scheduled to go green at 10:35 a.m. ET Sunday morning. The race will be streamed live on NBC Sports’ TrackPass service.