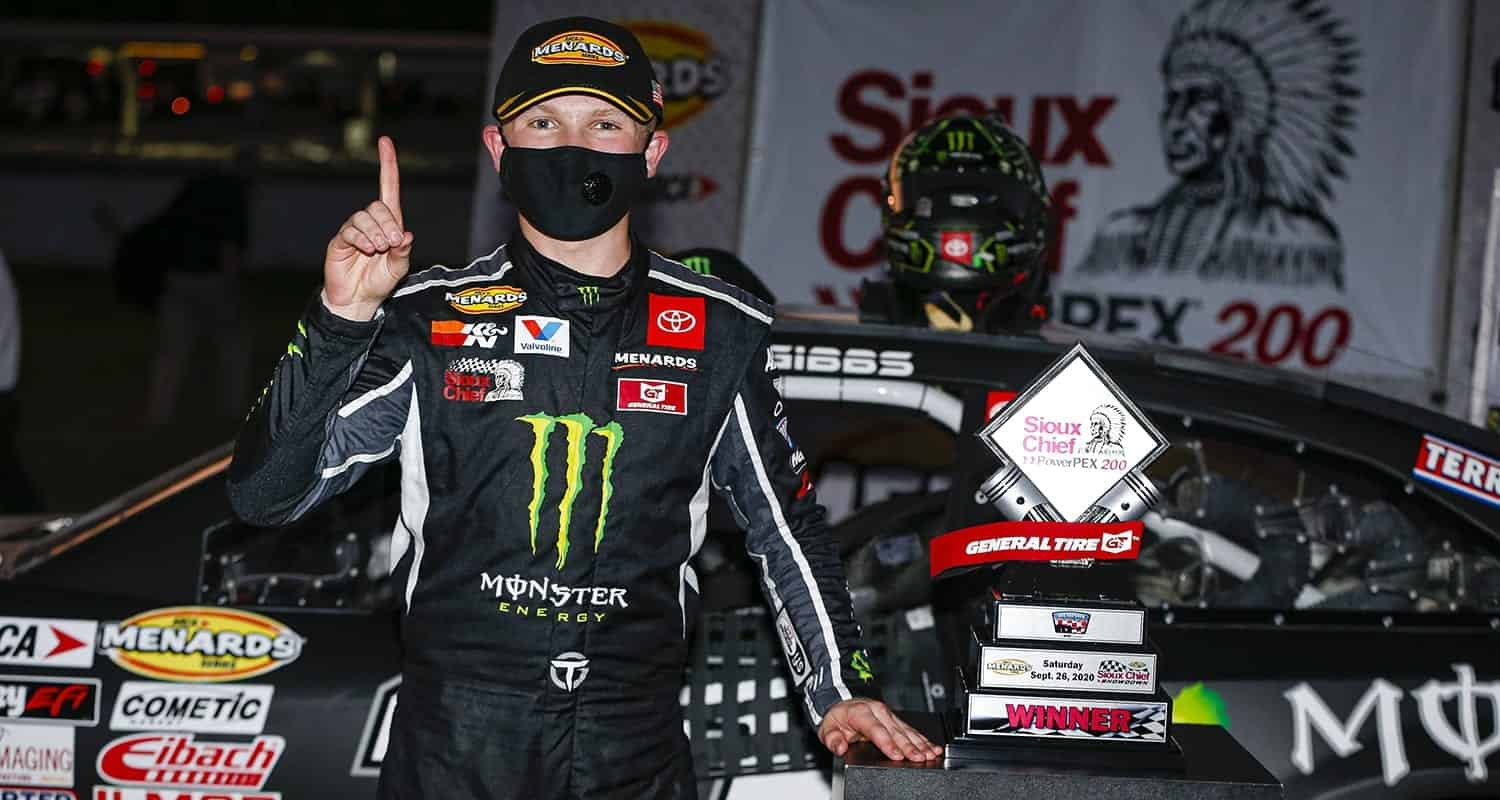 Gibbs won the pole earlier Saturday (Sept. 26), but he worked hard to end the night in victory lane in Millington, TN.

“This one means a lot,” he said in victory lane. “We really struggled with the car speed. My guys worked hard, we didn’t give up and we came out with the win. We beat all these guys, and it was definitely worth it. We worked hard, never gave up, and we became the best car by the end.”

“I work as hard as I can,” Gibbs continued to tell MAVTV. “My sponsor Mitch [Covington of Monster Energy] sent me a good message this morning to keep me motivated. I’m very excited right now, a lot of emotions, and we’re in victory lane!”

Indeed, Gibbs’ crew chief Mark McFarland made changes to the No. 18 Joe Gibbs Racing Toyota during each of the scheduled breaks. Gibbs bested Bret Holmes on the last two restarts, including the final one which took place with only a few laps left to go.

Holmes dominated the race, led the most laps and paced the field to each of the two scheduled breaks.

After the second break with 50 laps to go, Holmes lost the lead to Gibbs, but he remained in second place.

After a spin by Taylor Gray with less than 10 to go brought out the yellow flag, Holmes had another chance to retake the lead. Restarting from the outside of the front row, he was unsuccessful and ultimately finished in third place.

“Man, we had a strong car all day,” Holmes told MAVTV after the race. “I can’t thank my guys enough. Just had dominant car three-quarters of the whole race. That last 50 laps, [Gibbs] got by us on the restart. I felt like, as the track started cooling down, we started getting a little tighter. That was something we didn’t really expect. Just sucks we couldn’t pull it off today after leading that many laps. I feel like there were a couple races where we should have had it. But on the bright side, we got good points. All you can do is not keep your head down too long and move onto the next one.”

Finishing runner-up in this race at the 0.75-mile short track was Sam Mayer. By virtue of his second-place finish, Mayer won the ARCA Menards Series Sioux Chief Showdown.

Mayer is the reigning ARCA Menards Series East champion and leads the points race with only one event to go this year.

Thad Moffitt finished fourth in his first race since the Daytona Road Course.

Chandler Smith finished fifth after receiving the lucky dog earlier in the race to be back on the lead lap.

Michael Self finished in sixth place, noting his Venturini Motorsports team struggled to find contending speed in his No. 25 Toyota.

With only two races remaining this season, Holmes retook the championship lead over Self by two points.

The next two races on the ARCA schedule have both been won by those two drivers. Self won last year at the Illinois State Fairgrounds, the next race on the schedule. Holmes won earlier this year at Kansas Speedway, and Kansas will host the ARCA season finale.