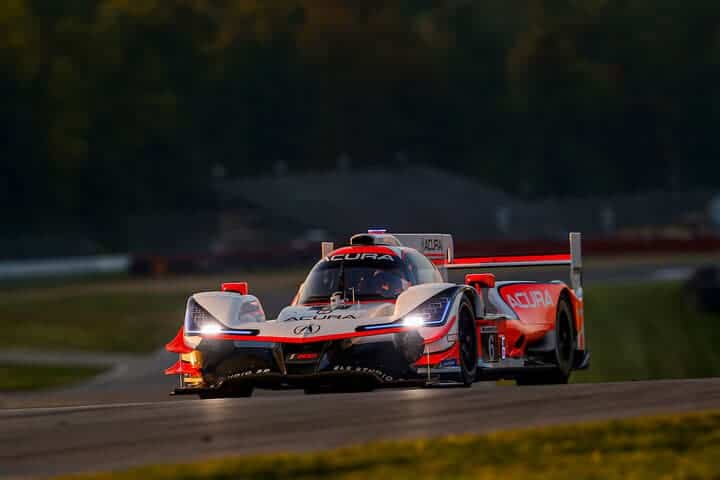 IMSA WeatherTech SportsCar Championship teams gathered bright and early at the Mid-Ohio Sports Car Course Sunday morning (Sept. 27) in order to qualify for the Acura Sports Car Challenge at Mid-Ohio.  The Penske boys did their manufacturer/race title sponsor proud as Dane Cameron won the pole with a lap at 114.750 mph.

Given the early morning conditions, it took a little longer than normal to put temperatures into the tires.  As a result, the best times came at the end of the session instead of in the middle.

Early on, Action Express Racing’s Pipo Derani was quickest in his Cadillac.  However, when the tires entered their optimum operating range, it was the Acuras that came to the front.  Helio Castroneves was there earlier, then Cameron came to the front as times continued to improve.

Cameron had only a small advantage over Derani before he dropped the gauntlet and improved into the low 71-second bracket.  Times continued to improve from there to the ultimate pole winning lap.

Cameron won the pole by a mere 16-thousandths of a second over Castroneves.  Given how close it was, Cameron was trying to improve right to the end of the session.  His final lap was one-thousandth of a second off of his pole time.

Mazda Motorsports’ Jonathan Bomarito will start third after turning in his best lap right at the very end of the session.  Derani will start fourth, while Wayne Taylor Racing’s Ryan Briscoe will start fifth.

Things weren’t all rosy for Briscoe.  Briscoe was third quickest with three minutes to go when he went too fast into turn 12.  He locked up his Cadillac and slid off-course into the dewy grass.  This move nearly put Briscoe into the tire barrier, but he was able to recover.  JDC-Miller MotorSports’ Gabriel Aubry did something similar and nearly hit Briscoe.

In GT Le Mans, Corvette Racing’s Jordan Taylor was the man to beat from the very beginning of the session and no one managed to do.  The formerly mulleted Florida racer will start on pole with a lap at 104.235 mph.  Taylor’s lap was three-eighths of a second faster than BMW Team RLL’s Jesse Krohn.  Oliver Gavin will start the second Corvette in third.

GT Daytona at one point looked like the AVS Vasser Sullivan teammates were going to score a front row sweep.  This did not come to pass as Frankie Montecalvo was unable to improve late and ended up qualifying seventh.

For Aaron Telitz, he ended up turning in a lap at 100.388 mph to win the GT Daytona class pole.  It is Telitz’s third pole of the season in his seventh start.

Telitz ended up one-ninth of a second faster than Meyer Shank Racing with Curb-Agajanian’s Matt McMurry, who set a flyer in the final minute to get up to second.  Misha Goikhberg in the Heinricher Racing Acura will start third, then Compass Racing’s Corey Fergus in the sole McLaren 720S GT3.  Turner Motorsport’s Robby Foley will start fifth.

The Acura Sports Car Challenge at Mid-Ohio is scheduled to go green shortly after 2 p.m. ET Sunday afternoon.  The race will be streamed live at NBCSports.com and on the TrackPass service.  For the NBCSports.com stream, you just need your credentials from your cable, satellite or telco provider to sign in and watch.  The broadcast will air via tape delay on NBCSN at 11 p.m. ET after all the action from Las Vegas wraps up.