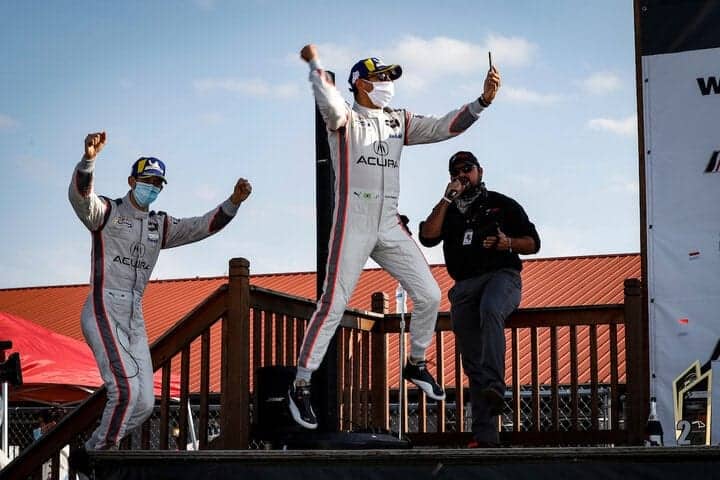 Acura Team Penske’s Helio Castroneves and Ricky Taylor claimed victory in the Acura Sports Car Challenge at Mid-Ohio Sunday (Sept. 27).  It is the third straight win for the duo and their fourth victory of the season.

Dane Cameron started from the pole and led early over Action Express Racing’s Pipo Derani.  The Acuras had shown a speed advantage for much of the weekend and Cameron used this to open up a decent lead.

Further back, Mazda Motorsports’ Oliver Jarvis tried to use an alternate pit strategy.  He chose to make his first of three pit stops 26 minutes into the race.  That put him way behind and hoping that the whole field could get through their stops before the yellow flew.  Shortly after his stop, Jarvis ran up on the GT Daytona entry of Turner Motorsport’s Robby Foley.  Contact was made that resulted in Jarvis spinning in turn 12.

Jarvis ended up a lap down after this incident, but was able to resume.  The contact broke the steering on Foley’s BMW.  Unable to get back around a full lap to the pits, Foley pulled off in a dangerous place, which brought out the race’s first full course yellow.  The BMW would be able to continue after a period in the garage for repairs.  They would end up finishing 32 laps down in 23rd overall.

During the yellow, the rest of the leaders made their first stops.  Cameron gave way to the always aggressive Juan Pablo Montoya.  He was able to maintain the lead under green until he approached the GRT Magnus Lamborghini of Andy Lally.  Montoya went too wide in turn 5 while trying to pass and paid the consequences.

This off-course excursion elevated Derani to the lead with Castroneves in tow.  Montoya was forced to make an unscheduled pit stop to check the undertray of his Acura ARX-05 and dropped back.

Derani was able to keep the advantage until the second round of pit stops.  Here, Castroneves was able to jump Derani.  Montoya ended up back in the lead since his issues put him on an alternate pit strategy.  The idea was that he would have been fine had the yellow not come out before he pitted.

Sure enough, that yellow flew when Hardpoint Motorsports’ Rob Ferriol spun into the tires exiting turn 6 after contact from Lally.

Ferriol was able to drive away from the scene, but his Audi R8 LMS GT3 was leaking fluid onto the track.  He then spun in that fluid in turn 9 and stalled.  For Ferriol, his day was over.

Montoya chose not to pit under the yellow, instead choosing to pit under green a few laps after the restart.  Here, Montoya lucked out as a couple of laps after his final stop, JDC-Miller MotorSports’ Tristan Vautier pulled off with an engine issue to bring out the third and final caution.  That put Montoya much closer to the leaders with fresher tires.

Over the final 28 minutes of the race, Castroneves ran as hard as he could with Action Express Racing’s Felipe Nasr.  Nasr was able to close up to within a few car lengths in the final few laps, but could not prevent Castroneves from taking the win.

Meanwhile, Montoya was charging like heck to get back to the front.  He made it as far as third before he dropped his right rear tire into the grass entering turn 1.  That resulted in a lurid spin.  After that, Montoya went to the pits and the team chose to end their day there.

The margin of victory was six-tenths of a second over Derani and Felipe Nasr.  Wayne Taylor Racing’s Ryan Briscoe and Renger van der Zande were third, allowing them to keep the points lead.  Mazda Motorsports’ Jonathan Bomarito and Harry Tincknell were fourth, while teammates Jarvis and Tristan Nunez were able to make up their lap and finish fifth.

The GT Le Mans race started with a flurry of activity.  Pole sitter Jordan Taylor didn’t get the best of starts.  That allowed teammate Oliver Gavin to make a play for the lead.  BMW Team RLL’s Jesse Krohn, who had been off the pace of the Corvettes all weekend, smelled blood as well.  Krohn attempted to make it three-wide into turn 4.  Unfortunately, he went into the turn too fast and slid off into the large sand trap known as China Beach.  Krohn was able to extricate himself, but lost nearly 30 seconds in the process.

While Krohn was going to the beach, Gavin was able to make the pass on Taylor for the lead.  Gavin led for the first 18 laps before Taylor was able to get back past.  Meanwhile, Bruno Spengler in the No. 25 BMW gave chase.

Aside from the early laps of the race, the No. 3 Corvette of Jordan Taylor and Antonio Garcia could not be touch.  While their teammates were never too far away, the No. 3 was able to hold on and lead the final two hours and 15 minutes to take their fourth win of the year.

The margin of victory was 1.472 seconds over the No. 4 Corvette of Gavin and Tommy Milner.  Spengler and Connor de Phillippi were third, while Krohn and John Edwards were fourth.

In GT Daytona, AVS Vasser Sullivan’s Aaron Telitz led from the pole in his Lexus RC F GT3.  Points leader Matt McMurry gave chase in his Lexus.  Meanwhile, Telitz’s teammate Frankie Montecalvo ran into early trouble when he ran into the back of Foley in turn 5 a couple of laps into the race.  This damaged the left front corner of the No. 12 Lexus and resulted in multiple unscheduled stops.

During the first caution of the race, McMurry was able to jump past Telitz in the pits.  McMurry’s quasi-teammate Misha Goikhberg was not far behind in third.  The second caution led everyone to pit for driver changes.  Here, the AVS Vasser Sullivan crew got Jack Hawksworth out in the lead.

Compass Racing’s Paul Holton was up to second on the restart, while Mario Farnbacher in the AutoNation Acura was third and desperate to get past.  Holton wasn’t having it, though.  After Nasr got past Holton, Farnbacher tried to follow past.  Holton moved over on Farnbacher and made contact with him three times on the pit straight.  This contact cut Farnbacher’s right front tire and put him off-course.

Farnbacher made it back to the pits and got a new tire, but he lost a bunch of time.  IMSA officials determined that Holton was fully responsible for this incident.  Instead of giving him a drive-through penalty, they assessed a 30-second stop and hold penalty for unsportsmanlike conduct.

When the contact was made between Holton and Farnbacher, Riley Motorsports’ Lawson Aschenbach was able to sneak past into second.  Following the final caution, he was able to match lap times with Hawksworth.  Meanwhile, Wright Motorsports’ Patrick Long was all over Aschenbach.

In the closing laps, Aschenbach was able to close up on Hawksworth, but he could not prevent Hawksworth and Telitz from taking their third win of the year.  Aschenbach and Gar Robinson ended up second, seven-eighths of a second back.  Long and Ryan Hardwick were third in their Porsche, followed by the Aston Martin of The Heart of Racing’s Ian James and Roman DeAngelis.  Farnbacher and McMurry recovered from their off-course excursion to finish fifth.

For the DPi teams, they will be off until the Motul Petit Le Mans at Michelin Raceway Road Atlanta on Oct. 17.  Meanwhile, the GT Le Mans and GT Daytona classes will compete at Charlotte Motor Speedway’s ROVAL on the undercard of the Bank of America ROVAL 400 on Oct. 10.