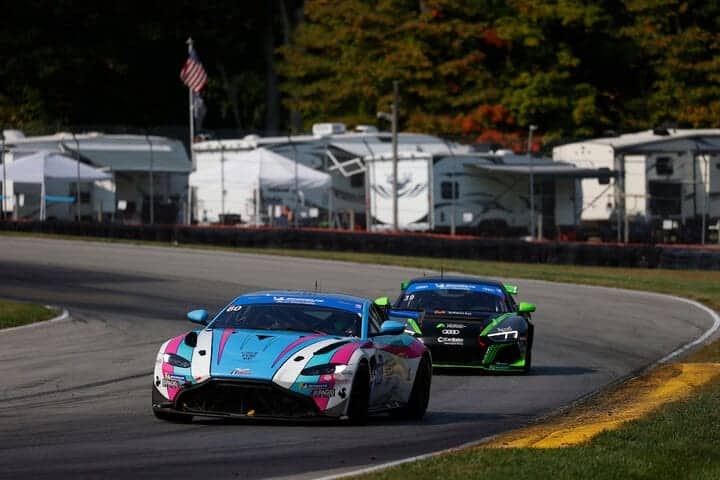 KohR Motorsports’ Kyle Marcelli and Nate Stacy took the overall lead when Winward Racing’s Alec Udell was forced to serve a penalty late in the race. From there, Stacy was able to hold on to score the weekend sweep in Michelin Pilot Challenge action at Mid-Ohio.

Stacy started from the pole and got a good start over CarBahn Motorsports with Peregrine Racing’s Tyler McQuarrie. McQuarrie was able to keep pace with the KohR Motorsports Aston Martin and pressured Stacy repeatedly for the lead.

With this form, Stacy and McQuarrie drove away from the rest of the field. Behind them, Multimatic Motorsports’ Scott Maxwell and Winward Racing’s Russell Ward engaged in a substantial battle for third. Maxwell was able to get past Ward at the start, but Ward wasn’t taking that lying down. The two fought for a half-hour for the spot. Generally, this action was clean, but it was also punctuated by some taps.

On lap 22, the battle came to a rather rough end. Ward got a run on Maxwell through Thunder Valley and went hard to the inside at turn 9. Maxwell apparently didn’t see the move as he turned in on the No. 4 Mercedes and contact was made.

A bit of contact results in the current yellow flag at @Mid_Ohio.#IMSA / #IMPC pic.twitter.com/zEKcrA04v9

Maxwell was able to back his Ford Mustang GT4 out of the tire wall and attempted to get back into contention. However, his car was too damaged to continue. Russell Ward ended up dropping out shortly afterwards as well.

There was roughly a lap and a half between the crash and the caution coming out. During this time, a number of teams made their first pit stop of the race, including Stacy. This ended up creating a problem for KohR Motorsports later on as Stacy got out of the car in favor of Marcelli before reaching the minimum drive-time of 45 minutes.

When the green came back out, BimmerWorld Racing’s James Clay held the overall lead. However, during his earlier pit stop, he spun the wheels on the jack. That is a no-no. When Clay pitted to serve a drive-through penalty, Riley Motorsports’ Dylan Murry claimed the advantage.

Prior to the caution, Winward Racing’s Bryce Ward was showing some good speed. Once Udell got in the car, he was an immediate threat at the front. A few laps after the restart, Udell was able to run Murry down and take the overall lead into the final round of stops.

Murry had the fastest of the final stops for the leaders, while Udell was a little slower. Marcelli chose to stay out long enough to try to jump Murry and Udell on the final stops. TCR-class traffic prevented Marcelli from doing so.

When Marcelli finally stopped with 35 minutes to go, the earlier drive-time issues forced Stacy to get back in the car. That, combined with a slower stop resulted in Stacy returning to the track 10 seconds behind Murry.

Over the next few laps, Stacy put up a series of quick laps, gaining a second a lap on the leaders. This put extra pressure on Udell to get past Murry before Stacy could get there. The two drivers ultimately came together in turn 4, resulting in Murry spinning out and Udell continuing. IMSA officials ultimately assessed a drive-through penalty to Udell for causing the spin.

Stacy took the overall lead when Udell served the penalty. That left him with a healthy enough lead that he could coast to victory.

The margin of victory was 6.473 seconds over Murry and James Cox, who recovered from the spin to finish second  McQuarrie and Jeff Westphal ended up third, followed by PF Racing’s Chad McCumbee and James Pesek. Tom Dyer and Mark Siegel in the second CarBahn Motorsports with Peregrine Racing Audi ended up a season-best fifth.

Udell and Bryce Ward recovered back to sixth, while Murillo Racing’s Jeff Mosing and Eric Foss were seventh. Turner Motorsport’s Bill Auberlen and Robby Foley were a quiet eighth, followed by Motorsports In Action’s Corey Lewis and Sheena Monk. The second Turner BMW for Foley and Vin Barletta were 10th.

LA Honda World Racing’s Taylor Hagler continued her best weekend of the season by leading with authority from the TCR pole. Bryan Herta Autosport’s Mark Wilkins challenged Hagler early, but the young Texan racer was able to hold off the Hyundai.

The caution threw everything up in the air as multiple pit strategies came into play. Once the minimum drive-time was met, Hagler pitted to hand over to Ryan Eversley. Fast MD Racing’s Max Faulkner chose to stay out and stick to the one-stop strategy. This gave him the lead. Then, there was the Roadshagger Racing strategy. They chose to pit and allow Gavin Ernstone to exit the No. 61 Audi in favor of Jon Morley. The stop occurred only 43 minutes into the two-hour race.  The plan was to go to the finish from there.

Shortly after the restart, Bryan Herta Autosport’s Gabby Chaves was able to get around Faulkner for the lead shortly before Faulkner made his one and only stop of the race.  The stops ultimately put KMW Motorsports with TMR Engineering’s Tim Lewis Jr. in the lead.

It was here that mechanical problems came into play. Tim Lewis Jr. had a 11-second over Eversley when the turbo failed on the No. 5 Alfa Romeo for the second day in a row. He was able to get back to the pits, but that was it for his race weekend. Eversley inherited the lead and ran well until his own turbo broke a few laps later, ending a great weekend on a low note.

Eversley’s failure put Morley into the class lead with a 16-second lead over Chaves. The general thought was that Morley was going to have to stop for a splash of fuel. However, Morley was able to conserve fuel in his Audi while running decent lap times. He ultimately used up most of his lead over the final 20 minutes of the race, but Morley was able to make the fuel last to give Roadshagger Racing their second win of the year. After the race, IMSA officials performed a fuel audit on the No. 61 Audi given that they completed 49 laps on their final run.

Morley and Ernstone ended up 1.557 seconds ahead of Chaves and Ryan Norman. JDC-Miller MotorSports’ Michael Johnson and Stephen Simpson overcame their fuel pickup issues from earlier in the weekend to finish third. Michael Lewis and Mason Filippi in the Bryan Herta Autosport No. 98 was fourth, while Faulkner and James Vance had to settle for fifth.

Michelin Pilot Challenge teams will not be in Charlotte as part of the ROVAL weekend.  Their next race is the FOX Factory 120 at Michelin Raceway Road Atlanta, scheduled for Oct. 16.