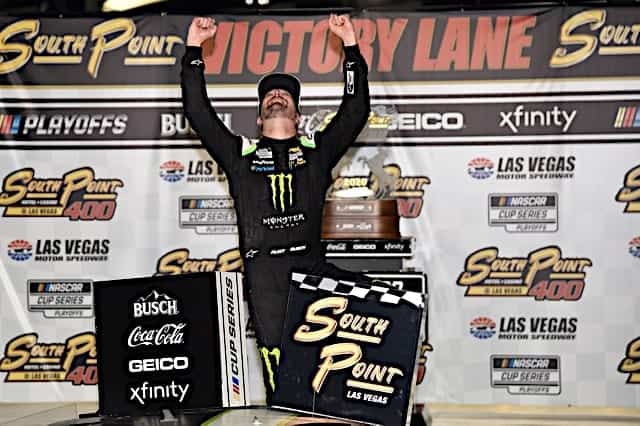 In his last trip to Las Vegas Motor Speedway before a NASCAR Cup Series retirement and transition to INDYCAR, Jimmie Johnson hoped for a solid run in the 2020 South Point 400 to close it out.

Little did he know, the seven-time NASCAR champion would become the pivotal crux that determined the outcome of Sunday’s LVMS event (Sept. 27). Although Johnson was not in a competitive position all night, his lap 236 tire problems and subsequent caution became the ultimate jackpot Kurt Busch needed to cash in on his first and long-awaited victory at his home track.

Johnson’s problems occurred right in the middle of green-flag pit stops. That left Busch, a Las Vegas native, sitting out front despite never being a contender for the win to that point.

In an instant, the script was flipped as the night’s three most dominant drivers, Denny Hamlin, Chase Elliott, and Alex Bowman were all trapped a lap down after pitting. Their loss of track position allowed an unassuming Matt DiBenedetto, Chris Buescher and others an unexpected chance to fight for the checkered flag.

In the end, it was Busch who motored his No. 1 Chip Ganassi Racing Chevrolet well away from the jumbled field. He survived three late restarts, including the final one in overtime following a late crash involving William Byron, Christopher Bell and Corey Lajoie.

“I pulled out some old drag racing skills on restarts,” Busch told NBC Sports in victory lane. “I knew that it was our strong suit. We just did it, held the position, and hung on. [Team owner] Chip Ganassi was up in the suites somewhere and I could feel him breathing over my neck wanting to win and we did.”

Busch, along with DiBenedetto had to survive a feverish charge from those who took the wave around including Hamlin.  The No. 11 Toyota was aided with much-needed fresh tires following a caution for John Hunter Nemechek, Erik Jones, and Ricky Stenhouse Jr on lap 251.

This is what happens when you turn right on an oval @NASCAR track. #NASCARPlayoffs pic.twitter.com/XBAlAWifRG

However, the fresh rubber was not enough for Hamlin to close the gap. He wound up third in a valiant effort, taking DiBenedetto side-by-side on the final lap while Busch was able to scoot away.

That gave the 2004 Cup Series champion his first Cup Vegas win in 20 years of trying.

“This is what kids dream of,” an exuberant Busch added. “When you grow up racing here, you dream of winning at your hometown track. For two decades, it’s kicked my butt.

The most recent victor at Las Vegas, Joey Logano, found luck of a different kind in an incident that also scrambled the NASCAR playoff standings. While battling Kyle Busch and Hamlin for the lead early in the second stage, the February winner was bodyslammed by Busch. That contact forced the No. 22 Ford to hit pit road for an unscheduled stop to address a massive tire rub.

While cautions initially remained sparse early in the going at LVMS, pit road miscues were nonetheless aplenty most of the night. A green flag pit stop cycle in stage two saw several sloppy moments including a speeding penalty, a malfunctioning tire gun for Kyle Busch and Kurt Busch overshooting his pit stall.

Tyler Reddick also had to make an unscheduled stop with a loose wheel early in the event. Right as stage two was ending, Reddick’s luck continued to deteriorate as he smacked the wall, drawing extensive damage to the right side of his Chevrolet. However, NASCAR elected to not throw the caution early for Reddick’s issues or a similar incident involving Josh Bilicki. Reddick would end up 38th.

Up until the late-race scramble, Elliott and Hamlin fought hard at the front amongst themselves. Hamlin would win the first stage after capitalizing on then-leader Elliott’s lost track position from a slow pit stop at the competition caution.

Elliott redeemed himself 80 laps later by winning the second stage, holding off a late charge from his foe with the aid of lap traffic. However, Elliott’s pit road issues popped up once again; he lost spots on both the stage two caution and a lap 190 yellow for debris.

With Elliott in dirty air, his teammate Bowman outsmarted Hamlin on a late-cycle of pit stops under green. By pitting one lap before Hamlin, Bowman was able to get around the No. 11. However, it was all spoiled by the pivotal caution for Johnson’s dilemma.

That caution jumbled positions up and down the running order.

DiBenedetto hung on to finish second, matching his result in February’s LVMS race, followed by Hamlin. Martin Truex Jr and Bowman rounded out the top-five finishers. Elliott, meanwhile, got stuck in traffic, botched some late restarts and could do no better than 22nd.

With the unexpected win, Busch is the first driver to lock himself into the NASCAR’s Round of 8. On the opposite end of the spectrum was Austin Dillon, who suffered mechanical problems after debris finagled his power steering. Finishing 32nd, Dillon has work to do to keep his incredible postseason run alive. He dropped to last in the 12-driver playoff field, some 23 points below the cutline.

Trouble for #NASCARPlayoffs driver Austin Dillon with about 50 laps remaining in the first race of the second round!

The NASCAR Cup Series now heads to Talladega Superspeedway next weekend for the Yellawood 500 on Sunday, Oct. 4 at 2:00 p.m. ET. TV coverage will be provided by NBC.

The only reason for the 38 to be allowed to perform in Brian’s product is to bring out the yellow flag to bunch up the field. He is really exceptional at it.

Lucky or not, Busch is into the next round….