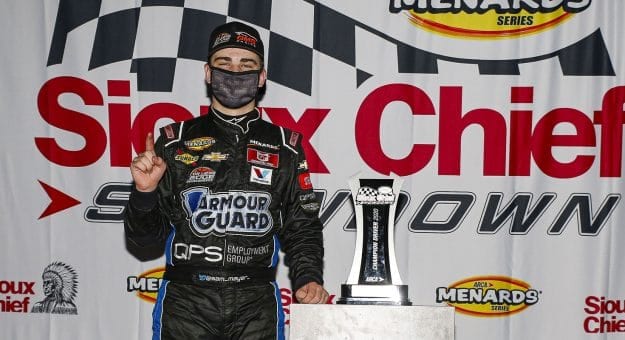 After finishing second in the Sioux Chief PowerPex 200, Mayer clinched the championship while Ty Gibbs earned the victory at Memphis International Raceway. The mere fact that Mayer finished in the top five kept Gibbs from his first championship in NASCAR. Mayer earned his first of 2020 and is a few weeks from more than likely clinching the ARCA Menards East Series championship.

Gibbs gave it his all, but in the end it wasn’t enough. Mayer’s solid afternoon earned him the Sioux Chief Showdown championship. It didn’t matter as he still came up short by just five points.

Michael Self finished the SCS season in third, Holmes in fourth and Smith fifth.

Hailie Deegan ended up sixth while Taylor Gray, Drew Dollar, Mike Basham and Tim Richmond made up the rest of the top 10.

A total of 60 drivers competed in the championship, with seven drivers running in all 10 events. Mayer was the highest-finishing Scott Rookie of the Year contender.

ARCA Menards Series East Standouts: Gibbs earned the victory and was the highest finishing ARCA East Series driver. Mayer, as noted above, has the chance to clinch another championship in 2020 on top of the one he just clinched when the East series heads to Pensacola. The East season finale will take place on Oct. 10 and will be run at 5 Flags Speedway.

ARCA Menards Series West Standouts: With the West racing in Las Vegas on Saturday, there were zero representatives from the West in Saturday’s event. Gracie Trotter became the first female driver in ARCA history to earn a victory.

West will return to action on Oct. 23 from the All American Speedway.