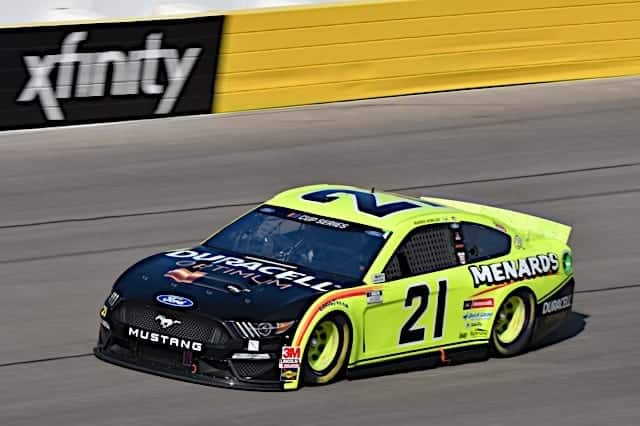 He was close… but no cigar. DiBenedetto had a shot, restarting alongside winner Kurt Busch three times over the final 25 laps of the race. However, Busch’s No. 1 Chevrolet rocketed away each time, leaving the driver of the No. 21 Wood Brothers Racing Ford forced to settle for a runner-up finish… again.

That leaves the Woods stuck at 99 wins, DiBenedetto collecting a pair of seconds at LVMS in 2020 and sitting on three career runner-up finishes.

“Man, I’m just so proud. I want the Wood Brothers 100th win so bad.” DiBenedetto told NBC after the race. “I love driving for this team, I hope I get to drive for them for a long time to come. You know, I want to get a good run, put Menards, Duracell, Motorcaft/Quicklane, Ford, and all these folks. I want to put them in victory lane so bad.

“It’s tough to come that close, but really proud of the team, pit crew, my crew chief Greg Erwin, all these guys. We’ll get us one.”

DiBenedetto was a solid top-10 driver for the most of the event before circumstances unexpectedly tilted his way. He ran 11th in stage one, improving slightly to eighth at the end of stage two. He seemed on track for a quality finish yet didn’t have the speed to run up front.

That’s when Lady Luck rolled DiBenedetto a Vegas break. He was making his final stop of the night with just over 30 laps to go when Jimmie Johnson blew a tire, bringing out the caution flag.

While many top drivers were trapped a lap down, DiBenedetto was ahead of the start/finish line and on the lead lap when the yellow flag flew. That meant when others ahead of him pitted, the No. 21 Ford would cycle out with the lead.

He just couldn’t hold it. Kurt Busch was able to get by DiBenedetto after a lap of side-by-side racing; the No. 21 settled into second. Two more caution flags would fly in the closing laps, for incidents involving John Hunter Nemechek and William Byron, among others. That gave DiBenedetto more chances but he just couldn’t muscle his way back to the front.

It was still a big momentum boost for the organization one week after being eliminated from the NASCAR playoffs. DiBenedetto earned his first top-five result since a third-place finish at Kentucky Speedway back in July.

So absolutely proud of this bunch. Trying to come up with all the right words. Great call to catch that caution, just a super good night and couldn’t be prouder of the race Matt drove. We came up short OF A WIN. So all in all, a good night

Now, DiBenedetto must watch and wait as the Woods decide whether to renew his contract. The driver said Sunday night he’ll know this week whether the team picks up his option for 2021.

Luken Glover joined Frontstretch in 2020 and has been a racing fan for practically his entire life. His grandfather is an avid fan and helped the late Junie Donlavey in his shop in the 1990s. Luken gained that passion as a 3-year-old and has dreamed of working with NASCAR since then. He is a current college sophomore and began racing karts in 2020 as well. Luken has a joy for writing about racing, and uses that to write for Frontstretch.
Previous Kurt Busch Gets Lucky in Las Vegas, Wins the South Point 400
Next F1 Review: Lewis Hamilton Penalty, Carlos Sainz Mistake Headline a Calm Russian GP