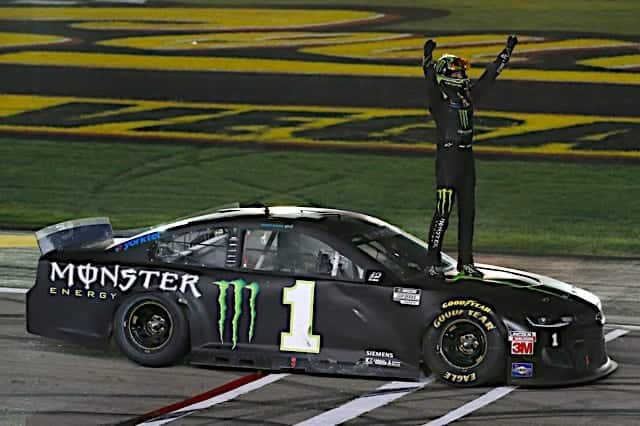 Kurt Busch’s out-of-nowhere hometown win came as he used every advantage presented to him by a caution that fell at just the right time. He snagged the South Point 400’s checkered flag for his first win of the year and secured a berth in the next round of the playoffs. Busch and a number of other drivers remained on the racetrack while the leaders began their green-flag pit stops, and the running order was shuffled tenfold with all the cars coming down pit road under the yellow.

Busch had to endure several restarts prior to finally taking the checkered flag, holding his own on both of them and withstanding challenges from Matt DiBenedetto, Alex Bowman, Denny Hamlin and others.

Finally, finally winning at his hometown track after 22 starts and 20 years of racing there in Cup competition, Busch had largely struggled in Sin City, with just five top 10s prior to Sunday night. He also has four different stretches during his career of at least three straight finishes outside the top 10 and has led double-digit laps at Las Vegas just four times (Sunday night marked the fourth), and he finished a dismal 25th at the track in February.

DiBenedetto shone as the highest-finishing driver outside the playoffs. After his elimination from NASCAR’s postseason last week at Bristol, DiBenedetto repeated his performance from Las Vegas in the spring. He finished second, less than a second behind winner Joey Logano prior to the COVID-19 shutdown. DiBenedetto ran well most of the night and was in contention until the very end,

Denny Hamlin’s all-out charge on the last restart stood out as the move of the race, despite the No. 11 just finishing third. Hamlin got a huge run on the backstretch and was flying, locking onto Bowman’s back bumper and shoving him all the way into turn 3. With DiBenedetto on the high line, Hamlin pushed Bowman until he bumped into the No. 21 and then dove to the bottom. The contact was a momentary setback for Bowman, allowing Hamlin to battle with DiBenedetto for second. The move didn’t ultimately work for Hamlin aside from gaining one spot, but it was a strategy that very well could’ve propelled Hamlin into a last-lap battle for the lead.

Polesitter and last week’s winner Kevin Harvick had the biggest “meh” race of the playoffs. After winning two of the three races in the first round and adding a seventh at Richmond, Harvick notched his 25th top 10 of the season with a 10th at Las Vegas. It wasn’t the kind of performance we’re used to seeing from the No. 4, though. While Harvick did score stage points and end up with the top-10 result, he ran decent at best for the majority of the race and was never really a factor. He didn’t even keep the lead from the pole for one circuit, as Chase Elliott took over the top spot immediately following the green flag.

Spring winner Logano ended up on a couple drivers’ nerves early on, with a late block of Elliott eliciting some radio fury from the No. 9 driver. Shortly after, Logano went three-wide with Kyle Busch and Hamlin for the lead, made contact with the No. 18 and was forced to pit road as a result. Logano received a late free pass after spending much of the race a lap down and ended up 14th.

THREE-WIDE FOR THE LEAD!

All-time Las Vegas wins leader Jimmie Johnson was tagged for speeding on pit road and later suffered damage when a tire came apart. He salvaged his night, though, with an 11th-place finish.

The aforementioned caution and pit cycle thrown off its axis changed the entire complexion of the race. Suddenly, frontrunners like Hamlin and Elliott were midpack on the restart and the top 10 consisted of all the underdogs, from John Hunter Nemechek to Ryan Newman to Chris Buescher.

The buildup at the front of the field led to three-and-four-wide restarts and the leaders having to fight their way back through the field, which they mostly did. Elliott pitted again prior to the penultimate restart, falling down the order and never quite recovering, and while Hamlin rebounded to a top-three result, Elliott ended up 22nd.

As always, that caution begets other cautions, too. One came from Nemechek spinning on the backstretch, overcorrecting and sliding up the racetrack where he was almost hit at full speed by Erik Jones and Ricky Stenhouse Jr.

A slide by @JHNemechek will reset the field once again.

Another restart is coming up at @LVMotorSpeedway. ? pic.twitter.com/yGzNOOEG2d

Chaos, chaos and more chaos. It’s doubtful that many expected an upset winner at Las Vegas, and the same goes with the running order becoming shaken up so late in the race.

If that wasn’t enough, the round ends with the Charlotte Motor Speedway ROVAL, but next week is the mammoth, mayhem-filled 2.5-mile oval in Alabama. Talladega Superspeedway presents a looming challenge at any point of the season, but it’ll be the track that will make or break drivers’ Round of 8 chances. The Big One that traditionally mars superspeedway races, the drivers who see those events as their only shots at victories and general playoff stress are all huge factors as the touring series heads back east.

For drivers like Austin Dillon, whose mechanical issues doomed his night at Las Vegas, getting caught up in a crash at Talladega might as well be a death sentence. Anything other than a win the following week at the ROVAL would seal their playoff chances’ coffin shut.

On the flip side, drivers who didn’t have a great race on Sunday – like Dillon – should also see Talladega as a huge opportunity. Anyone can win at Talladega and the possibility of securing a spot in the next round of the playoffs ahead of the ROVAL will be too tempting for some to simply play it safe.

Keep an eye on Logano and the cars around him, too, for the next few weeks. He didn’t make many friends at Las Vegas and the tensions between him and other drivers could very well reach a breaking point sooner or later.

How… worried should the playoff drivers be heading into Talladega?

As mentioned before, Dillon is in the biggest hole of any driver. Clint Bowyer and Aric Almirola both sit 20 or more points below the cutline, so Talladega may be the biggest opportunity for them to make up points. The latter won the fall race in Alabama in 2018, and Bowyer has a couple of victories to his name there (the latest in 2011).

Kyle Busch, who probably isn’t the biggest fan of racing at Talladega, has an average finish of 20.7 there and sits nine points below the cutline. It might be in his best interest to run at the back of the field for most of the race.

Bowman helped his chances for the Round of 8 with a solid run at Las Vegas, but he sits dangerously close to the bubble’s cutoff point. Harvick and Hamlin are more or less in the clear, barring disaster, but all the other playoff contenders are less than 20 points to the positive side of the cutline. In other words, no one (outside of Harvick and Hamlin plus Kurt Busch) are safe or guaranteed to be above the cutoff when the haulers depart Talladega Superspeedway.

Ironic, isn’t it? Just raced at Vegas, but next week is the real crap shoot…