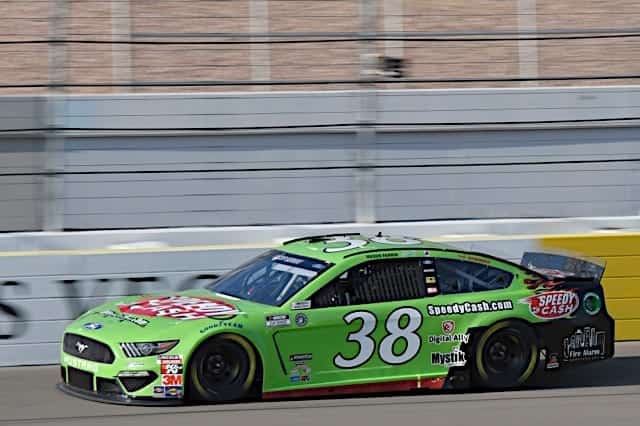 There hasn’t been much to get excited about for our Cup Series underdogs lately. We’ve primarily talked about the best in the category barely making the top 20 by the end of each race. Las Vegas Motor Speedway and its surrounding environment may have inspired you to bet the farm on a long shot, but hopefully you resisted the urge.

John Hunter Nemechek managed to sneak into the 20th spot but that was about it in terms of highlights from the neon garage. After playing the fuel-mileage game to gain track position, the rookie was victimized by a tire issue late. Attempting to rebound, Nemechek hovered just outside the top 20 as two late cautions brought him within striking distance. When Chase Elliott fell by the wayside, the No. 38 was in. Still, it’s a little tough to feel like the result was any grand accomplishment considering how well he ran early on, a sentiment Nemechek echoed after the race.

“Man, that was a heartbreaker. Our No. 38 Speedy Cash Ford Mustang was on the free side to fire off, and we were bouncing on the splitter pretty bad. Seth [Barbour] and the crew did a fantastic job on pit road getting the handling to where we were comfortable, and we fought our way up into the top five. Unfortunately, we had a tire go down towards the end of the final stage and then made contact a few laps later trying to avoid a wreck. Definitely not the finish my guys deserved today. We have Speedy Cash back with us again next week, so hopefully we can be ‘speedy fast’ again at Talladega.”

For the second time in three weeks, no one joined our top dog in the first 20 positions of the final results. Now, Nemechek’s teammate Michael McDowell was one spot behind him in 21st, but we don’t do participation trophies here. Better luck next week to McDowell and everyone else. They’re certainly going to need it.

On Saturday night, the NASCAR Xfinity Series cars took to the 1.5-mile oval and Ryan Sieg stole the show. Sieg was a threat to win for much of the evening, leading twice for three laps and winding up fifth at the checkered flag, leaving Vegas seventh in the standings. Additionally, Jeremy Clements was 13th, Brett Moffitt 14th and playoff contender Brandon Brown finished in the 15th position.

Friday (Sept. 25) saw the NASCAR Gander RV & Outdoors Truck Series event. Ryan Truex did manage to finish 12th in a Niece Motorsports truck, but no one else in the category managed to crack the top 15 at the conclusion of the race.

Just in case last week in Vegas didn’t satisfy your gambling itch, the ultimate game of chance looms on the horizon. That’s right kids, it’s Talladega time. Predicting what is going to happen here is a lot like trying to choose a winning roulette number: occasionally you’ll be right, but for the most part it’s just one wrong guess after another. That said, I’ll try anyway.

The Cup Series underdog to watch is Ty Dillon. This team has an almost uncanny ability to avoid disaster at almost every superspeedway race. Until Daytona a few weeks ago, he had put together a string of top 10s, and I think the No. 13 has just as good of a lucky shot as anyone else.

As for the Xfinity teams, Brown is almost too easy a pick. He has done some of his most impressive work on the big tracks in Daytona and Talladega. With this team in the playoffs, I get the impression that they view this race as a huge opportunity to advance and will probably bring their best equipment to try to pull off an upset win. Also, keep as eye on Alex Labbe. The road-course ace has enjoyed some solid runs on superspeedways and could be close to the front in the closing laps.

The Truck Series race at Talladega is probably the toughest to pick. After all, last year’s event is the most recent underdog win in the series, with Spencer Boyd taking the checkered flag. Odd as it may sound, I actually wouldn’t be all that surprised if Boyd were able to repeat the performance. I mean, he did outrun several top trucks at the end, and the No. 20 group is a better team now than they were at this point last year.

Yea I was kinda heated at my boy @graygaulding for a few minutes but I’m over it already we always race eachother hard. Just bad timing for me this time lol ? still love ya Gray. https://t.co/y0CjVyQVJ0

Straight out of Ghost Busters walking down the hall…. who you gonna call?? Peter, Ray, Winston or Egon??? @ Las Vegas, Nevada https://t.co/ZG9iwEiEdX

It really is Our Motorsports this week pic.twitter.com/Ql6TmEhUvx

Remembering this great trip down to Mexico ?? with my amigos @RutledgeWood and @kylepetty to visit the shop my father and I built ?? #dnsrestauraciones
What a great time that was, I hope we can do it again soon ??#SuarezNation #DanielsAmigos #aircooled pic.twitter.com/QDaYHA6D1T