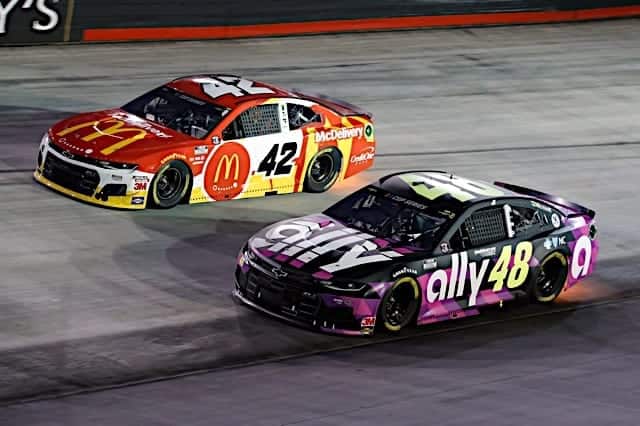 With the 2020 season entering its final stage, NASCAR is beginning to look toward next year.  This last week in September brought considerable news regarding driver lineups for 2021.  There have also been rumors that major changes could be in store for the Cup Series schedule.  But even as more news trickles out about the status of NASCAR in 2021, it still seems hard to believe that Jimmie Johnson and Matt Kenseth will not be regular competitors next season.

Of course, it is not a surprise for either driver.  Johnson announced at the end of last year that 2020 would be his final full-time NASCAR season.  Hendrick Motorsports has not confirmed who will replace Johnson in the No. 48, but Johnson has continued forward with plans to race elsewhere in the future, despite this season’s odd circumstances.  Kenseth was not expected to race in NASCAR at all this year, but he returned to the grid to drive Chip Ganassi Racing’s No. 42 car after Kyle Larson’s dismissal from the team.  Kenseth, like Johnson, has had a rough season, and Chip Ganassi Racing announced a week ago that Ross Chastain would take the reigns of the No. 42 in 2021.  It is unlikely that Kenseth will seek another full-time ride.

Even if Johnson and Kenseth haven’t performed up to their usual standard, it is fitting that they are leaving NASCAR together.  The two of them have been fierce competitors for practically their whole careers.  They couldn’t seem to get away from each other, often battling for wins and championships.  Kenseth and Johnson are so alike in so many ways, it is no wonder that their NASCAR careers took similar paths, even though Johnson was the one who walked away with more hardware.

For instance, take their records at Las Vegas Motor Speedway, the site of this week’s races.  Johnson and Kenseth are arguably the two best drivers in the history of the track.  Kenseth earned three wins and 10 top 10s in 18 starts at Las Vegas.  Johnson scored four wins and 10 top 10s in 21 starts.  One of his wins came in 2006 when he slipped past Kenseth after a thrilling last lap pass to win by just .045 seconds.  Other drivers have made their own marks at Las Vegas in the last decade, but Johnson and Kenseth were in a league of their own there for a while.

Several other tracks frequently saw Kenseth and Johnson in victory lane.  Johnson piled up an amazing seven wins at Texas Motor Speedway, including one win in the fall of 2007 that featured a late race battle with Kenseth.  For his part, Kenseth only won twice at Texas but holds a slightly better average finish (9.7 to Johnson’s 10.9).  Similarly, Johnson’s 11 wins at Dover International Speedway outpace Kenseth’s three, but Kenseth scored only one less top five and three less top 10s than Johnson over the course of their careers at the Monster Mile.  And if Johnson was a dominant force at Auto Club Speedway with six wins and 18 top 10s, then Kenseth was not far behind with three wins and 15 top 10s.

Both drivers even put together some of their best seasons in the same years.  Kenseth was the first to win a championship in 2003, with Johnson finishing second in points.  Three years later, Johnson won his first title and Kenseth ran second.  But 2013 is the best example of a season when both drivers were on top of their game.  Johnson won his sixth championship.  Kenseth, in his first year with Joe Gibbs Racing, won seven races, a personal best and more than anyone else that year.  In fact, Kenseth and Johnson combined to win 13 of the 36 races in 2013.

In addition to their on track accomplishments, Johnson and Kenseth have both represented some of NASCAR’s best teams.  Johnson was brought into the HMS fold by Jeff Gordon.  Kenseth came to Roush-Fenway Racing on the recommendation of Mark Martin.  Gordon’s and Martin’s on track battles in the 1990s would be a precursor to those of Johnson and Kenseth in later years.  Interestingly, Johnson and Kenseth both won more championships than their respective mentors, but the mentors wound up with more wins.

Eventually, Johnson and Kenseth grew into veteran leaders of their teams.  The No. 48 Lowe’s Chevy and No. 17 DeWalt Ford were two of the most iconic NASCAR rides of the 2000s.  Johnson picked up where Gordon left off by winning seven championships for Hendrick, including an unprecedented five in a row.  Kenseth delivered Jack Roush his long-awaited first championship and, to date, his team’s only Daytona 500 victories.  When Kenseth moved to JGR, he provided a veteran presence that the team desperately needed.

Kenseth and Johnson even share a similar approach to the demands of big-time auto racing.  Both of them have been excellent representatives of NASCAR on and off the track.  The two of them prefer to let their driving do their talking.  This has led Johnson and Kenseth to be unfairly judged as too “boring” or “vanilla” by some fans, though neither driver is lacking in personality.  As professional athletes, they are both class acts, though not immune to controversy.  Given Johnson’s dust ups with Kurt Busch in 2011and Kenseth’s altercations with Joey Logano in 2015, both of them can even say that they have feuded with a driver of Team Penske’s No. 22 car.

Maybe the most recent lesson that Johnson and Kenseth have learned together is that nobody can outrace Father Time.  Johnson struggled through his first winless season in 2018.  The following year, he missed the playoffs for the first time ever and did not qualify this season either.  Kenseth has actually won a Cup Series race more recently than Johnson, despite racing sporadically since 2018.  But he too missed the playoffs in 2020.  Just like Johnson, this year was only the second time Kenseth failed to make the postseason.

With all their shared experiences, rivalry on the track, and friendship off of it, Johnson and Kenseth could very well make their last start in the same race.  That’s not a guarantee; Johnson has not ruled out coming back to NASCAR for an occasional appearance. Kenseth is up to his third “last race” and is quick to point out that he never officially retired.  But the two of them have nothing left to prove in NASCAR.  The end of this season offers an opportunity for both of them to step away and return to their families.  Both drivers have a house full of young daughters, so it’s not like they’ll be bored at home.

The next time Johnson and Kenseth are in the spotlight together, it will probably be when they go into the NASCAR Hall of Fame.  Johnson is unquestionably a first-ballot hall of famer, and Kenseth deserves the same.  Should they go in together, it will bookend the careers of two drivers who represent the very best of stock car racing.

Nice article. I was always a fan of Kenseth and watching this year has been painful. I know Kenseth would have had more success on the track if he had run for Hendrick Motorsports for his whole career. But I know from watching them both that Matt was never really in Jimmie’s class. Almost nobody ever was. Jimmie had the best crew chief most of the way, but Matt had some good ones, too. When Jack Roush had the 4-5 car teams of his heyday, Matt was his best driver and the team had Carl Edwards for much of that time. But Jimmie was Hendrick’s best driver even though his team also had Jeff Gordon driving for much of his career, and Gordon is a legend. There are many comparisons between the two, and I enjoyed this article.

One was the reason the chase became the championship format, the other the reason why fans hate it.

I know that’s not exactly true but it was too funny not to say.

Carol
Reply to  Bill B

I will say it. Kenseth never won a race in his championship year. Nascar definitely changed the rules because of him. Too bad, He had a great year and he deserved the championship. Too bad Nascar. Then Nascar proceeded to mess up with the “chase” rules.

I have always been a Matt Kenseth fan! He is an awesome person and was glad to see him race this year. Its too bad he never had a car worth driving from Ganassi. And he definitely be in the Hall of Fame. He deserves it. What crew chief has you come down for tires in the last few laps of the race only to end up outside the top 20, where he spent most of his time in the race. He was in 6th place. Maybe he can find a full time ride. It would be nice.