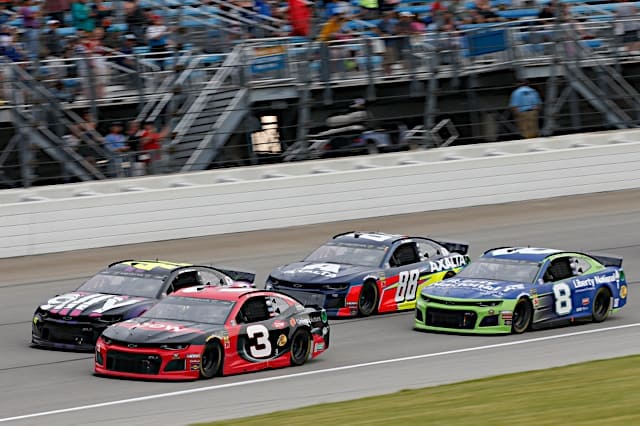 On the eve of the reported 2021 NASCAR Cup Series schedule’s release, NASCAR confirmed that both Chicagoland Speedway and Kentucky Speedway will lose their dates.

A report from The Athletic on Tuesday (Sept. 29) solidified the removal ahead of the full schedule’s unveiling on Sept. 30.

According to the report, the changes come as a result of fans’ complaints of too many tracks 1.5-2 miles in length.

The removals mark the first time a track was struck from the Cup schedule since 2004, when Rockingham lost its date.

Additionally, Chicagoland will no longer feature the Xfinity Series, Gander RV & Outdoors Truck Series or ARCA Menards Series, according to an announcement on the track’s website.

NASCAR had already announced a pair of changes – first a revamping of Auto Club Speedway into a half-mile short track, and later Texas Motor Speedway’s loss of a points race date and instead hosting of the 2021 All-Star Race.

As for Chicagoland, the track did not host a race in 2020 due to the COVID-19 pandemic. Alex Bowman holds the title of most recent winner, scoring his first career victory during the 2019 race.

“This is bad for (the city of Joliet). It was a great event,” Joliet Mayor Bob O’Dekirk told The Athletic. “It certainly helped businesses, local restaurants and hotels. I haven’t talked to the (city) council but I know are very disappointed by it. As far as they know it’s a one-year decision right now. There’s no indication either way about what would happen moving forward.”

“[The move is] by no means a reflection of the support our fans have demonstrated,” Chicagoland Speedway’s Scott Paddock said in a statement on the track’s website. “Rather, it is a desire and an important step for the industry to incorporate new markets and new courses into the schedule, and expand the variety of competition.”

“…It’s difficult at this time to speculate on what 2022 might bring,” Paddock added. “We will continue to work with NASCAR on potential future opportunities beyond 2021 and will keep [the fans] updated.”

Kentucky last hosted a race in 2020, won by Cole Custer. Custer’s win was, like Bowman’s, his first career victory. The track has not yet made a statement regarding the report.

Great start. Now change the rules to go back to allowing teams to build their engines, allow the teams to make gear changes and suspension changes. They are basically driving IROC cars at this point. You have to let teams push some boundaries at this point. Look back 15-20 years ago and you actually had attrition due to mechanical failures over 500 miles but now you seldom see a race that someone blows an engine. Also, while we are at it make tires that fall off sooner. Tires shouldn’t last an entire stage of the race (don’t get me going on stage racing). Get rid of stage racing as I find it pretty pathetic that most races seem to be all down to how you come off pit road. Loosen up the cars by getting some air under them (get rid of the splitter and side skirts). Make racing come down to the car setup and driver ability. After all these years I still love racing, the sound of the cars and all that but NASCAR has made some changes over the past decade and a half that has sucked some of the life out of the sport (in my opinion).

This is the deathnell for this track. No Indycar, now no NASCAR or NHRA. Not much left as I don’t think the driving school is there anymore either. Got to see both Indycar and NHRA there years ago. Too bad as this is the only game in this area since Milwaukee closed years ago. Guess that’s progress….

Well said Chris. Unfortunately for the fans, NASCAR thinks the “product” is what the fans want. Going back to their roots would be good for all. I miss the slingshot pass where being in first during the last few laps could be a bad thing.

And since you mentioned IROC, the 1989 Daytona is one of the best.

One isc, one smi. Both are turds. Wonder what drug deals were made between the two (not bzf drug deals to be sure).

I wonder. Six of the last 7 races have had ratings of less than 2.0. These were on a variety of tracks and with very little competition from other sports.
Makes you think that the problem is far deeper than we might like to think.

Well said, Chris! I agree with you and also with Irvan fan. BZF managed to push his view of what the fans wanted to see, even when many fans were vocal that they didn’t agree with it. No one stepped in and even before the Covid issue, you could see how much attendance had fallen off at most of the tracks. NASCAR ruined the racing that most people enjoyed for this cookie-cutter/IROC junk.