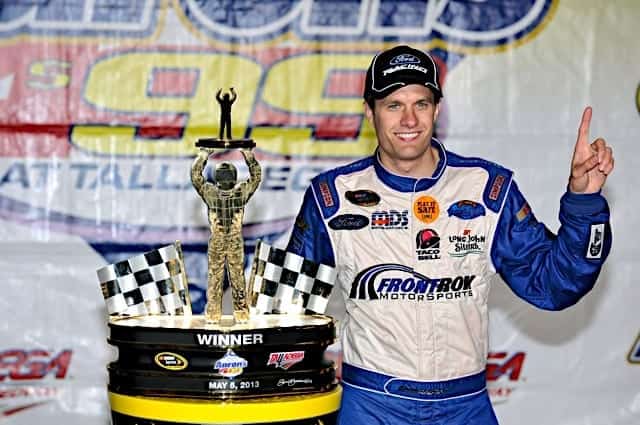 Did You Notice? … Talladega Superspeedway is often referred to as the track “where anyone can win.” Pack racing keeps the entire field of 40 cars stuck together like superglue most of the event. Add in Russian Roulette-style wrecks that often eliminate 15, sometimes 20 cars at once and you get the perfect storm for underdogs to thrive.

It’s true Talladega has produced its share of upsets. But is it really the best track for NASCAR Cinderellas to shine?

No other racetrack has more than three.

Daytona has also produced the most recent Cinderella story: Justin Haley in the rain-shortened 2019 Coke Zero 400. Add in Trevor Bayne in the 2011 Daytona 500 for Wood Brothers Racing, and that’s two career one-race surprises over the last decade.

Talladega, meanwhile, has had a series of milder upsets. Aric Almirola earned just his second career Cup victory during the 2018 playoffs. But how much of a shocker was that, really? Almirola nearly qualified for the Championship 4 that season. A year earlier, Ricky Stenhouse Jr., driving for Roush Fenway Racing, earned his first career Cup victory. He’s since won in Daytona’s summer race. And David Ragan produced the closest to a Haley-style upset in 2013, timing his last-lap pass perfectly with underfunded Front Row Motorsports for his second career victory.

So if Cinderellas aren’t winning at Talladega… who is? A closer look at the last five years shows an all-too-familiar pattern of elite, multi-car teams that tend to dominate at other types of tracks.

TALLADEGA WINNERS SINCE 2015 (BY TEAM)

So what’s the deal with ‘Dega? The more recent handling packages, especially the one without restrictor plates, offer enough horsepower for the multi-car teams to stay superglued to the front. There’s also been a philosophy in recent years, especially during the stage era, for more top-tier teams to race hard throughout the full event. “Sandbagging” in the back in order to avoid some wrecks costs drivers precious bonus points.

But there’s also been a greater stratification between rich and poor. Some of the backmarker teams these days are so weak they’re unable to cling onto the lead draft. Starcom Racing, B.J. McLeod Motorsports and Rick Ware Racing were among those laps down by speed at the conclusion of the June Talladega event. And for those that do? Lilke Beard Motorsports and Brendan Gaughan? They can only rise so far through the field before getting blocked behind a three or four-car team working together.

SHR took this pack racing strategy to the next level in 2018. After qualifying 1-2-3-4, they stayed that way throughout almost the entire event, leading 155 of 193 laps run before a weird, fuel mileage ending ruined their freight train. Since then, though, manufacturers like Ford have only tightened the grip on sticking together… and it’s worked. Blue Ovals have won nine of the last 10 ‘Dega races despite losing the last three Daytona 500s.

So yes, Talladega can still produce an underdog win under exceptional circumstances. It just doesn’t happen as much as we’ve all been taught to believe over the years.

Did You Notice?… Chicagoland Speedway, back in the spring, was the subject of scrutiny over potential industrial development? Future plans remained unclear but, following the cancellation of 2020 events, there were vehement NASCAR denials the 1.5-mile oval was scheduled for demolition.

Now, Tuesday afternoon (Sept. 29) comes word NASCAR won’t be including Chicagoland on its 2021 schedule along with Kentucky Speedway. It’s the first time racetracks have been removed from the series slate since Rockingham Speedway prior to the 2005 season.

It comes as no surprise those two intermediate ovals were on the list; per tradition, one is owned by each racetrack behemoth, International Speedway Corporation and Speedway Motorsports, Inc. Both facilities are in the same geographic region as Indianapolis Motor Speedway, a track with rich history NASCAR desperately wants to keep on its “go-to” list if at all possible.

The way the 2020 schedule worked, in a non-COVID-19 world, NASCAR was planning to hold races at Chicagoland, Indy and Kentucky within the course of one month. How many fans would have gone to multiple events during that span? And if they didn’t … the sport was betting Indy would be their choice.

One likely move, according to The Athletic, is to move one of these dates to Road America out in Wisconsin for 2021. That adds a road course to the schedule, adding diversity while spreading out the geographic region Cup competes in.

Will either track make a return to Cup competition? Kentucky feels like it’s been done in for years by its 2011 Cup debut in which fans spent hours stuck in traffic. The gridlock was so bad thousands never even got to their seats, turned away by jammed parking lots or simply because the race was ending. None of the races since, even Cole Custer’s overtime stunner this summer, have been captivating enough to bring them back.

Chicagoland, it seems, could be destined for warehouse development after all. ISC could also repurpose it into a short track, similar to what’s happening with Auto Club Speedway. But that place has always been a bit of a misnomer. It’s an hour, minimum, from the center of Chicago with no traffic. It’s placed in the middle of nowhere in a region already well saturated with NASCAR dates. And what about Iowa Speedway four hours west? That track has a deal with INDYCAR, and its unique layout (7/8-mile oval) is unique within the sport.

Give NASCAR credit for putting its money (er, schedule) where its mouth is when listening to fan criticism. People didn’t like the intermediate races, and leadership is willing to fix it.

The fact that the two restrictor plate races are at the top of the list because they ARE crapshoot races where anyone can win. Sure it doesn’t happen often but they are the two tracks at the top of the list aren’t they? So you kind of disproved your own assumption. What you really need to do is not just concentrate on the winner but look at the top 10 from the last 20 races. You will see names there that you won’t see in the top 10 anywhere else. You are also more likely to see weekly contenders at the bottom of the finishing order. The combination of indiscriminate BIG ONES which result in a high attrition rate, pack racing and restrictor plates result in an evening the field effect.

“…Knaus could never harness Byron’s momentum from three eNASCAR Pro Invitational Series victories…”. Really Tom? In what reality would you think there would be any correlation between the result of a video game and actual on track racking. As Mr. Hand would say, “What are you people, on dope?”,