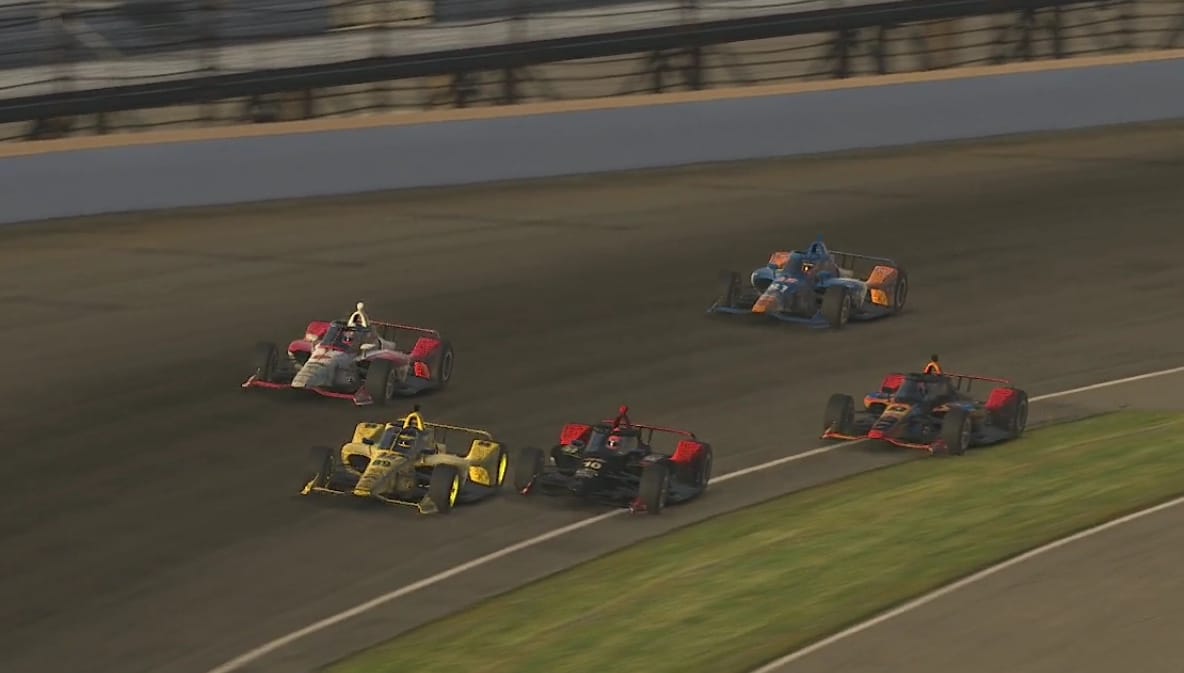 Screenshot from beardedsimracer’s Twitch; credit to iRacing and Podium eSports

There’s nothing quite like a championship race held at Indianapolis Motor Speedway, even virtual ones. The same held true for Monday Night Racing’s Tufco Flooring 125 on Monday night (Sept. 28), though it did end with some controversy.

Championship 4 contenders Nick DeGroot and DJ Cummings were in the midst of a tight battle in the last three laps before contact on the final corner sent DeGroot spinning. Cummings and fellow championship contender Michael Rossi then made contact coming to the line, which sent Rossi into the pit wall while Cummings crossed the bricks in first with Championship 4 driver Justin Melillo just behind in third.

After further review, race administrators determined the contact between Cummings and DeGroot was avoidable and made the decision to freeze the field off of turn 4 due to avoidable contact. As a result, DeGroot was awarded the win and the championship.

“Just basically, the way this package was, … wrap it around the bottom and hold that lead,” DeGroot said after the race. “Really, the only way they get you is to get a really big run, and at the end of that race with cars dicing back and forth and everybody serpentine, it’s really hard to get that run.

Led over half the race, P1 entering the final corner, then calamity. I understand the difficult spot the officials were put in as they decided what to do & although the title feels nice, it’s also bittersweet with how it all went down. pic.twitter.com/chJD1xy3HQ

The win marked the Motorsports.com editor’s seventh of the 22-race season in MNR. The iRacing league started in Spring 2020 during NASCAR’s break for the pandemic. MNR’s driver lineup features motorsports media, crew members and actual drivers. The league even includes Frontstretch‘s Michael Massie.

To quote my ? spotter/crew chief @dwelkeroutdoors , I Tokyo drifted under champion @ndegroot89 coming to the finish line ?

I finished somewhere in the 10th-12th range. But most importantly I didn’t wreck any legends. This season of @MonNightRacing was such a cool experience. pic.twitter.com/wjL1dzGCsX

”It’s been a trip since I first joined this league — raced against Kyle Busch, beat him at Fontana [Auto Club Speedway] — all the way up to this,” DeGroot said. “This was an incredible race, those first 124 laps were incredible, fun. Loved racing DJ, Michael and Justin for this championship.

“It’s really a shame how it all ended in the end there. I wish it could’ve ended differently because I hate winning a championship with an asterisk next to it.”

While it may have been a controversial finish, there was no doubt DeGroot had one of the strongest cars of the night. He played defense much of the evening at the front of the field and led the most laps in a field consisting of an racing legend and Indianapolis 500 champion, Mario Andretti, as well as Bobby Labonte, Max Papis and Ron Capps.

”I got my first Indy 500 win earlier this year at Indianapolis, and to come here and win here again and lead all those laps was just so much fun,” DeGroot added. “I love this track so much, I love this combination. It’s my favorite car/track combo on the server. I knew we were going to be hard to beat today. It was great to be up front there, leading a bunch of laps, battling with Mario Andretti for a good while there, that was probably the highlight of the race for me.”

The race was filled with multiple wrecks, many of them bringing out the caution. Melillo had an early setback when he was involved in a wreck within the first 10 laps. Ford Martin flipped in front of him, and several others approaching from behind crashed while trying to avoid the flipping car, giving Melillo damage.

DeGroot, meanwhile, methodically worked his way to the front and took the lead just before Joshua Slate and Labonte crashed into the fence around lap 20.

One big incident occurred when Joe Adgie, Steven Ellis, Chris Wilner and Papis all made contact with each other. Wilner ended up upside down but was able to use one of his four fast repairs to stay in the competition.

After another wreck involving Brenden Madonia, Seth Eggert and NHRA veteran Capps, drivers made their pit stops and Melillo found himself in the top 10. Vargas and several others shuffled in the front before mayhem ensued. Labonte appeared to hit the wall just enough to send him down into Andretti, and chaos set on from there. Melillo was among many others who were involved in that.

Another caution flag came out with about 45 laps to go for a smaller incident, and the field pitted during this yellow. Slate again worked his way into second, while Degroot, Cummings and Rossi all battled together. Eventually Slate moved into first with less than 20 laps remaining, but had to make his final pit stop a few laps later when he ran out of gas. All the leaders pitted during this cycle, and just in time, too, as the yellow flag came back out with 13 laps left.

The field bunched up and restarted with nine to go, and everyone jostled for positions. Then on lap 119, Noah Lewis hit the inside wall hard, bringing out the final caution. Slate was also involved in this incident — leaving him with a disappointing result despite his fast car.

When the race went back to green with three laps left, all fought for every piece of real estate on the track. Melillo had made it all the way into the top four, but made contact with Martin, sending him out of contention. A couple of laps later, Cummings, in a desperation move for the championship, made the contact with race leader DeGroot that was deemed avoidable by race officials, which led to DeGroot winning the race and the innaugural MNR championship over Cummings.

One bad move cost me the championship ? After calming down, I respect the decisions made by @MonNightRacing admins to give the title to @ndegroot89. He dominated all night and definitely deserved it! What an amazing night of racing and already can't wait for Season 2! pic.twitter.com/Tr6xaFP8Ko

Season 2 of MNR will begin on Nov. 16 and will air on Podium eSports. The NASCAR Cup cars will take on Talladega Superspeedway to set off the 18-race season. An All-Star Open and Race are scheduled for Feb. 1.