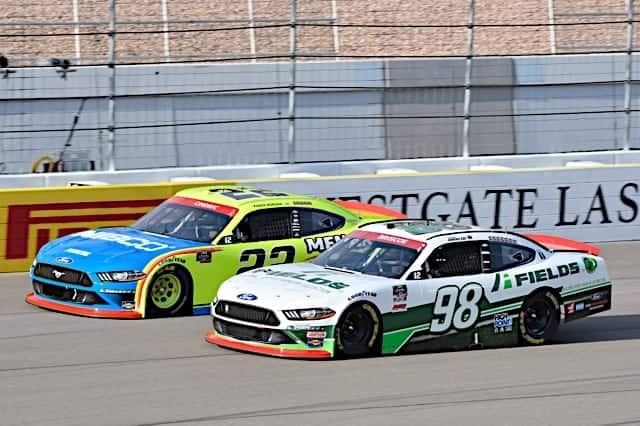 We are in the midst of that time of year again: silly season. While many moves have been made between NASCAR Cup Series drivers, there is always the underlying presence of Xfinity Series drivers making the big leap.

One of the big questions in the silly season files is who may be the next rookie class in 2021? Ross Chastain has already been tapped to drive the No. 42 for Chip Ganassi Racing in 2021, but he’s already made 79 starts in underfunded equipment. There are a few drivers who stick out and some who could make the move sooner rather than later.

Briscoe is no doubt the most coveted driver in the series this season. Before the season started, Briscoe made the bold prediction that he needed to win eight to 10 races to solidify his racing plans, and he did not back down. This past weekend’s race at Las Vegas Motor Speedway saw the No. 98 car dominate the race, leading 164 of the 200 laps to earn his eighth win of the season. Mathematically, Briscoe still has a chance to exceed his own goal of winning 10 races.

His 2020 performance and talent has had rumors swirling of him landing in the Cup Series in 2021. The most likely landing spot for him would be a promotion for Stewart-Haas Racing in the No. 14 Ford Mustang. Clint Bowyer is a pending free agent, and while the team wants to keep their same roster another season, there is no guarantee they will. Bowyer has a favorable personality in the garage and with fans, but his performance with SHR has not been quite up to par. He hasn’t won a race since June 2018 and currently sits 20 points out of a transfer spot to the Round of 8.

Many fans have penciled Kyle Larson to this ride, but it is more and more likely he will land at Hendrick Motorsports. If so, and SHR cuts ties with Bowyer, Briscoe would be the inevitable choice.

The man right behind Briscoe in the wins category is Cindric with five. The Team Penske driver went on a summer tear, including with a doubleheader sweep at Kentucky Speedway in early July. While Cindric has three fewer victories than Briscoe, he has the advantage over him with 17 top-five finishes and 22 top 10s with 10 stage wins. And oh yeah, he won the regular season title.

The most likely landing spot for Cindric would be at Wood Brothers Racing should the team not not renew Matt DiBenedetto‘s contract. Cindric’s father, Tim Cindric, is the president of Team Penske and the Wood Brothers have a technical alliance with Team Penske.

Another option is a shot in the dark, but not impossible: Roush Fenway Racing. In a Zoom interview with media in August, team owner Jack Roush said there was no chance of an Xfinity team revival but he was open to a third car at the organization if the funding was there. RFR has not had more than two full-time cars since 2014 and currently field cars for Ryan Newman and Chris Buescher.

This could be a backup option if the Wood Brothers renew DiBenedetto contract but highly unlikely.

The 2019 NASCAR Cup Series Sunoco Rookie of the Year has not had the season he was hoping for in 2020. The JR Motorsports driver was slated to make 21 starts in the No. 8 Chevy and has currently made 17 of them. He has a glaring seven DNFs but many were out of his control. In his first start at Las Vegas Motor Speedway, a suspension failure caused him to spin into the wall after running inside the top five.

Fast forward to June at Homestead-Miami Speedway, where Hemric was running in the top five after a late race restart only to be collected in a crash out of his control. While he was running second at Pocono Raceway, teammate Noah Gragson tangled with Myatt Snider and caused a multi-car crash, collecting the bystander Hemric. A blown engine ended his day at Road America, and at the Daytona International Speedway road course and Darlington Raceway, he was taken out by another driver.

While it certainly has been a frustrating year for the 29-year-old, there have been bright spots. In the races where he has not been involved in a crash or foiled by mechanical issues, Hemric has scored top 10s. He recently finished third at Las Vegas over the weekend and earned his sixth career series runner-up at Charlotte Motor Speedway in May. The North Carolina native brings a quality of consistency and hard work ethic despite never winning in one of the top three NASCAR divisions.

In his sole Cup season at Richard Childress Racing, he showed flashes of potential that can only grow with more experience, which he did not get, as the team electing to go with 2019 Xfinity champion Reddick.

A couple of mid-tier rides seem like legitimate possibilities for Hemric. Ryan Preece could be cut by JTG Daughtery Racing in the No. 37, a ride Hemric was linked to last year before Ricky Stenhouse Jr. was signed  to the team. Spire Motorsports is moving to a two-car team in 2021 with some upgraded equipment. Justin Haley has been linked here, and the other ride could to go to someone like Hemric or Corey LaJoie. Richard Petty Motorsports is also looking for a driver after Bubba Wallace‘s departure, and the Chevy connection could put Hemric on the short list, though its’ unlikely he’ll drive the No. 43.

Kaulig Racing driver Chastain is heading to Cup next season, and his teammate Haley could join him.

Haley has two wins in the 2020 campaign, both coming on superspeedways at Talladega Superspeedway and Daytona International Speedway. The 21-year-old has improved in almost every category from 2019 and also holds the unique achievement of winning a Cup race at Daytona in July 2019 (the race was rain-shortened). Haley currently sits fifth in the playoff standings and has a chance at a deep run, which could improve his case.

The ride that Haley has been linked to is a car at Spire Motorsports. The team currently fields one car with multiple drivers, but after acquiring the Leavine Family Racing charter, it will field two full-time entries in 2021.

Because of their affiliation in the past with Haley, one of those rides could go to him. While the equipment is underfunded, Haley had some solid runs in the ride during his appearances. The other ride could go to someone with more experience, and that could come in handy for someone who has only made four Cup starts.

At the beginning of the season, the possibility of Jones being mentioned as a 2021 Cup driver was questionable. Now in a season that has seen the No. 19 team earn three wins, the possibility grew stronger.

Jones has solid backing in Menards, his father is president and CEO of Rheem and Jones has earned a lot of experience through Toyota’s development. While one could argue that a couple of the wins fell into his lap, he would not have won had he not been in those positions. The 23-year-old has set a career high for top fives in a single season and is averaging a career-best 13.4 finish. The ability to win and run up front has earned him some shots to transition to Cup in the near future.

Only one Toyota team has an opening next season, and if Jones were to stay in the Toyota camp it could make sense. Gaunt Brothers Racing fields the No. 96 for Daniel Suarez in Cup, but on Sept. 15, Suarez announced he would be departing the team after the 2020 season in hopes for better equipment.

GBR is hoping to purchase a charter for 2021, and they have a slight alliance with Joe Gibbs Racing. If the team were to sign Jones, it is very possible JGR could boost their alliance with the team, as Gaunt has been racing an eight-year-old chassis this season.

Jones brings sponsorship to the table as well, which could come in handy for the small team. The debut of the Next-Gen car in 2022 could also benefit GBR, as the new car is expected to cut costs for teams and provide a more equal playing field. Spire Motorsports, Richard Petty Motorsports or Go FAS Racing could also all be in the mix if Jones makes the jump.

Briscoe will be driving at SHR next season. Cindric at Wood Brothers (sorry Matty D).

Hemric is now “damaged goods” and will race full time in Xfinity for a mid level team..

Haley and Jones need at least another year in Xfinity. Makes sense since they are not as polished and the new car roll out would align with the 2022 season.

If JTG Daugherty does get a new driver for the 37, it should be someone who can improve the team. Daniel Hemric will not do that.

I know there is an urge to move up Briscoe and Cindric to Cup next year, but it would be smarter to move them up next year when the new car debuts. Putting in the old car will just extend their learning curve needed to adapt to Cup. This will be Ford’s call.

If JTG actually cuts Preece loose for next year is still up in the air. It has been rumored that Corey LaJoie may move over to this ride, but recently Preece has been running much better. That said, if JTG makes a change it will be with a Cup-experienced driver such as LaJoie, but not a rookie. They have suffered enough shouldering the expense of repairing or scrapping wrecked cars this season.

As for the rest of the possible openings: Spire is strictly a buy-a-ride operation. RPM is losing most of its sponsors and might not answer the bell next season. Gaunt Brothers lost out in the “Bid for Bubba” sweepstakes, lacks a charter and might fade away. Who knows what GoFas will do?