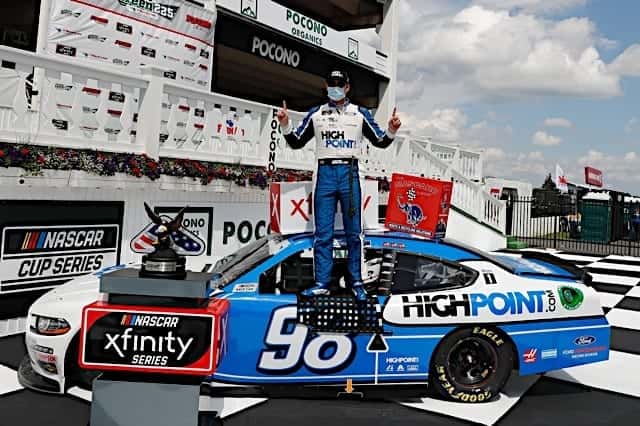 2020 has been challenging for many, but for Mitchell, Indiana’s Chase Briscoe, it’s been a banner year and one he will never forget.

The driver of Stewart-Haas Racing’s No. 98 Ford came into the season with his future in doubt. He won just one race in 2019 and told the media that he needed to win eight races to have a successful year. Many thought that goal was unattainable. Not only has he accomplished this feat, but he’s done it with six races to go in the season.

In addition to becoming a consistent winner and the favorite to win the Xfinity Series championship this year, Briscoe has also emerged as a future star. With his plans for the 2021 season still up in the air, many have speculated whether Briscoe should make the jump to the Cup Series or wait and get another year of seasoning in the Xfinity Series.

One of the major factors is NASCAR’s new Gen-7 car, which is scheduled to debut in the 2022 season. The Gen-7 car is supposed to drive much differently than the currently Gen-6 car. It may be pointless to bring up a young driver to a new car for a year, then have him learn another new car just a year later. Others wonder if keeping him in the Xfinity Series would stunt his growth as a driver.

Our writers Mark Kristl and Clayton Caldwell debate what Stewart-Haas Racing should do and where Briscoe should be racing in 2021.

There are too many unknowns for Chase Briscoe to move up full-time in the NASCAR Cup Series next year.

On the one hand, NASCAR just released the 2021 Cup Series schedule and there are six road course races, which is ideal for Briscoe, who traditionally runs well at those tracks. On the other, there will be too many one-day shows for Briscoe to expedite his learning curve to the Cup Series.

Steve O'Donnell: Daytona, Bristol, Coke, Nashville, COTA, Road America, Indy road course, Phoenix will be traditional practice-qualifying-race … he indicated others will be 1-race shows. Said he hopes could have some iRacing events with Cup drivers on those weekends.

This season, SHR driver Cole Custer was the only rookie to make the Cup Series playoffs. His lone win at Kentucky Speedway occurred after he nailed a late restart. Furthermore, no 2019 Cup Series rookie made the playoffs. Regardless of Briscoe’s talent, moving up to the Cup Series from the NASCAR Xfinity Series is a daunting challenge.

Next year will also be the last year for the current Cup car, so it would be wasteful for Briscoe to hone his skills on one car only to undergo the same process in his second full-time Cup season.

The Xfinity Series schedule for next year has not been released yet. Although there are rumors about it, at least some of its races will be a companion event with the Cup Series. Briscoe could gain experience racing on those new racetracks and debut in a new car.

Briscoe has increased his number of wins, top fives, and laps led from last season. Another year in the Xfinity Series would be a chance for him to prove his growth this year was not a fluke.

In NASCAR, confidence is everything. After Briscoe won the Xfinity Series playoff opener at Las Vegas, he emerged victoriously relieved to advance to the next round of the playoffs. Duplicating that dominance in the Xfinity Series next year would fully prepare him to compete full-time in the Cup Series in 2022.

If Briscoe remains the head of the Xfinity Series class next year, he will force Stewart-Haas Racing to play their hand. – Mark Kristl

The Time Is Now

The time is now. Chase Briscoe needs to be in the Cup Series in 2021. It doesn’t matter what ride he has. Ford and the folks at Stewart-Haas Racing need to move him up or they’ll miss out on a great opportunity.

Take a look at his 2020 season and compare it to others in the past that made the jump. Last season, we had three drivers that battled for the NASCAR Xfinity Series championship. All three of them – Cole Custer, Christopher Bell and Tyler Reddick – made the jump to the Cup Series for 2020.

But none of their seasons even come close to the season Briscoe has had this season. He has won at a variety of different tracks, and there’s little doubt he’ll win at least one more before the season is out. His wins this year include Las Vegas, Darlington, Homestead, Pocono, the Indianapolis road course event, Dover and Bristol. Briscoe would be an automatic favorite at any track in 2021.

He has very little stock-car experience compared to his competitors. The first time he sat in a stock car was in 2015. Before that he was a dirt track ace. His limited experience in stock cars makes this season even more remarkable considering the lack of track time. Yet he’s not only beating his competition – he’s dominating them.

Waiting until 2022 to put him in a Cup car could be dangerous because he may not have the same success on track in 2021. The racing world is very humbling and so much change happens from year to year. If he struggles in 2021, it could be hard to sell sponsors to get him to Cup for 2022.

Plus, if I were Ford and Stewart-Haas Racing, I would get him into a Cup car before someone else gives him an opportunity to do so. Sure, he’s locked into a contract with Ford through the 2021 season, but if they wait until 2022, depending on circumstance, there could be other options for Briscoe to go in the Cup Series. If a better ride at Chevrolet and Toyota open up in 2022, it could mean that he gets away from Ford.

Right now, he has no other options. By waiting a year, they could not only miss out on Briscoe, but he could be winning races and running for championships with another manufacturer. That would be a major disaster. By putting him in the Cup Series and letting his Cup career begin in 2021, they’ll be more like to keep him in a Ford for the long haul.

Plus, think of the new schedule released for 2021. Winning the first dirt race at Bristol will be a historic milestone, and it would be a perfect fit for Briscoe’s background. Plus, the added road course events on the Cup schedule for 2021 is enticing as well, as he has won two road courses races in the Xfinity Series. Everything is lining up perfectly.

In the end, I believe Chase Briscoe has proven all he can in the Xfinity Series. It’s time for him to make the jump to the Cup Series. – Clayton Caldwell

Chase and Clint Bowyer should be splitting seat time in the #14 next season. It’s so painfully obvious. Clint could mentor him throughout 2021 before Chase takes the seat permanently. Chase could also drive the #98 xfinity car in selected races also…

Being a huge Clint Bowyer fan, I obviously don’t care for that idea at all!!!!!!

I knew somebody would reply! Sorry! Hard to replace a guy who might win a championship, I know

Wow, can’t believe anyone would want to keep mr. Mouth n the 14 all he is good for is spinning out & running his yapper.