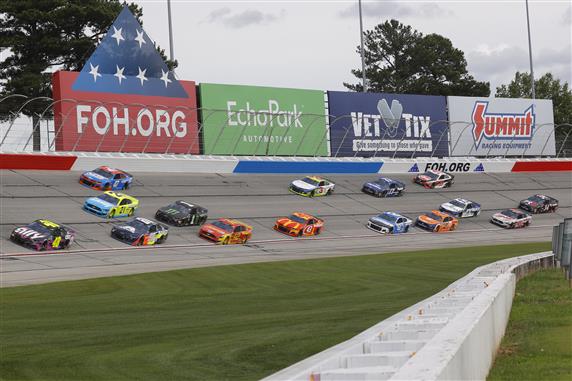 NASCAR is revealing its schedule for the 2021 season, and multiple changes abound for the NASCAR Cup Series.

Atlanta Motor Speedway will run two Cup races for the first time in 11 years, on March 21 and July 11. The latter date moved sponsorship from Kentucky Speedway, which was announced as one of two tracks removed from the schedule. July’s race is the Quaker State 400, while March’s event is the Folds of Honor QuikTrip 500. AMS is planning to allow a limited number of fans in the stands and camping areas for both events.

Darlington Raceway also gets a second Cup event next year after hosting three in 2020 but just one for many years prior. The first event will be on Mother’s Day, May 9, and the second will be the traditional Southern 500 to open the Cup playoffs on Sept. 5. Per NASCAR’s Steve O’Donnell on Twitter, both races will use the low downforce package.

Two road courses will make their debuts in the Cup Series in 2021. For the first time in Cup history, drivers will take on Indianapolis Motor Speedway’s road course on Aug. 15. The Xfinity Series competed on the 2.439-mile course in July. Additionally, the NTT IndyCar Series will also run the road course the day before the Cup race.

The second new road course revealed was Circuit of the Americas; its Cup race is on May 23. Tony Stewart drove one of his team cars there last October as a demonstration. COTA has two layouts; Formula 1 and IndyCar competed on the 3.41-mile course. There’s also a shorter, 15-turn layout. The Cup race’s specifications will be revealed at a later date.

Then, for the first time since 1956, Cup will race at Road America on July 4. Last year, IMS’ oval held the event on Independence Day weekend, while Daytona International Speedway hosted it from 1959-2018. The NXS currently competes on the 4.048-mile track; Michael McDowell and Christopher Bell have both won there.

Cup’s going dirt track racing, too. Bristol Motor Speedway will be transformed into a dirt track when it hosts its spring event on March 28. It will be the first time the series races on dirt since 1970, when Richard Petty won at North Carolina State Fairgrounds. Bristol also ran dirt events for the World of Outlaws and dirt late models in 2000-01. The Gander RV & Outdoors Trucks competed on Eldora Speedway from 2013-19, but couldn’t run in 2020 due to COVID-19. Bristol’s second date will be on Sept. 18.

Phoenix Raceway will once again host all three series’ championships from Nov. 5-7. Cup’s spring event will be held on March 14.

The All-Star Race will move to the Lone Star State next season, as Texas Motor Speedway hosts its first All-Star event on June 13. The Race and Open was moved to Bristol this past July due to COVID-19 restrictions in North Carolina. Charlotte Motor Speedway held the majority of All-Star events prior to this year. Cup teams will return to Texas for a playoff race on Oct. 17. INDYCAR will also run a doubleheader  May 1-2. NXS drivers will compete on June 12 and Oct. 16, while the Trucks are scheduled for June 11.

As was previously announced, Nashville Superspeedway will host a Cup race on June 20. The event marks the first race airing on NBC.

Daytona will once again be the Cup regular season finale on Aug. 28.

May 23 — Circuit of the Americas

Props to NASCAR for finally getting creative.. only has taken the near complete destruction of the sport and a pandemic.. but, hey maybe better late than never.

The event at Road America will be a disaster. The way NA$CAR throws caution flags at a road coarse half the laps will be under caution and three or four, at least, GWCs will be needed. The gimmicky rovals should be eliminated.

Good thought. Something to keep and eye out for. I wonder if they have thought of it.

You’re out of your mind. The cup cars at road America will be amazing. If you’ve ever been to this venue you know that by the sheer size of the track cautions are not an issue. Full course cautions are a rare occurrence on the 4 1/2 mile circuit. The xfinity drivers have fallen in love with this place and I have no doubt the cup drivers will feel the same way. LETS GO RACIN !!!

You’ve obviously never seen a NA$CAR event on a road course. They throw yellow flags when a driver gets in the dirt and throws up a cloud of dirt. The event will be about 50-55 laps. The TV time outs will be say 10, 10, 30, each 4 or 5 laps. That takes 12-15 laps. that leaves maybe 35 possible competition laps. How many caution laps will the 38 cause? And the track is 4.048 miles in length. They are charging $85 for Sunday plus $10 for on-track parking with a shuttle from the non-paying parking area.

Bill B
Reply to  karl heberlein

Yeah Karl,
Up to this point there has never been a partial yellow at a road course at a NASCAR event (at least not in the last 25 years). The concept is foreign to them because a partial caution doesn’t allow time for commercials. So are you just assuming NASCAR will come around to the idea or have you never seen a NASCAR road course race?

While I applaud NASCAR finally paying attention to the fans, even if the reason is purely financial, but I can’t imagine that the drivers and crew members are happy about losing two consecutive weekend in Charlotte. From a travel and logistics standpoint, this schedule is brutal.

LOOKING FORWARD TO BRISTOL ?? CHECK OUT THE ACTION WHEN THE SPRINT CARS RAN THERE IN 2000 !! KYLE LARSON AND JJ YELEY WILL BE LICKING THEIR CHOPS

OSWEGO SPEEDWAY PUTS IN DIRT TO HOST THE BIG BLOCK MODIFIEDS TO TAKE THE PLACE OF THE SYRACUSE MILE DURING SUPER DIRT WEEK. IT WAS CANCELLED THIS YEAR.

IN 1990 JR. HANLEY MADE HIS FIRST TRIP TO THE PHOENIX MILE FOR THE COPPER CLASSIC. HERE IS A VIDEO OF HOW HE DID.

BTW, WHAT DID KYLE LARSON HAVE FOR BREAKFAST THIS MORNING?

Now will the Auto Club race even be ran with Covid stull going on?

Because I seriously doubt they want the last 2-mile layout with no fans.

I was really hoping Iowa would be on there. I’ll be really bummed if Iowa is not on the Xfinity, Trucks, and ARCA schedules. I know Iowa needs resurfaced and capacity is small for the top series, but…

I’d be almost as ecstatic if Rockingham got a race, but I know the ownership is wrong.

Junior needs to buy North Wilkesboro and bring it back, too, while we’re at it.

Lastly, when the world leaves California, if we could take back the developments in Riverside and recreate the track… Asking too much?

Not a fan of the Bristol dirt-thing. Don’t get me wrong, I love dirt track racing, but unless it’s the need for safer barriers to be in place, I don’t see the utility in trucking in tons of dirt and clay and then having to clean it all back off for one race. There are plenty of great dirt tracks already in place that would put on a great race.

Dirt track racing is fine. It just doesn’t belong in Cup. Can we get any more WWE gimmickry than running Cup cars on the dirt? Sad.

Bill B
Reply to  Joe

Thank you! I worried I would stand alone in merely questioning the concept. Ssooo many other paved tracks NASCAR could consider, especially in the long term, before this. Attendance may increase, but with all the dirt flying, they won’t see of the racing, merely hear it.

Having a March race in Atlanta is too risky. It is usually still like winter cold. I thought we went all through this about Atlanta in March years ago.
I like having a race at COTA. A new facility like that should have all the racing series once a year.

What, no more Brickyard 400, no more kissing the bricks. Funny how things were so important years ago and now, just forgotten.