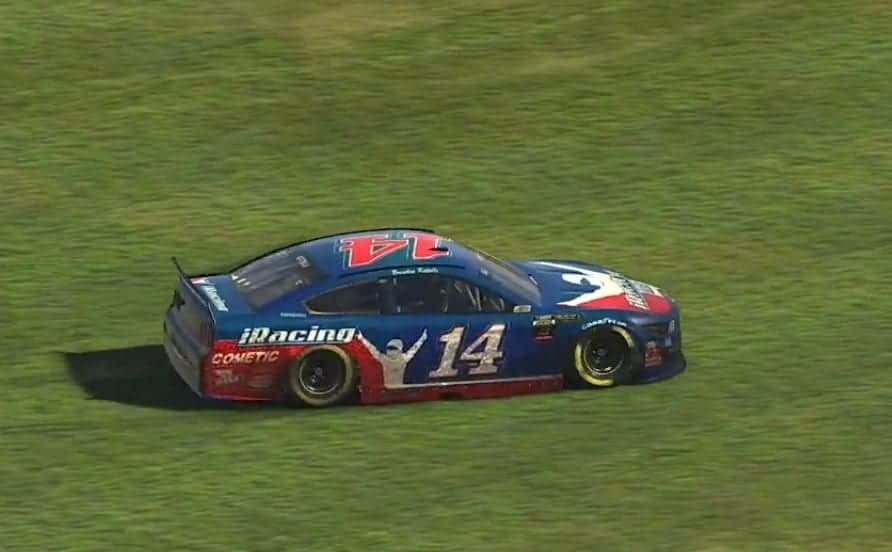 The No. 14 Clint Bowyer Racing driver had a strong push to the lead from teammate Eric Smith on the final lap, and held off those around him to take the victory. Behind him, Matt Bussa blew an engine coming off of turn 4, which caused him to drift into oncoming traffic. This set off a huge wreck, with several cars flipping coming to the checkered flag.

Still, Kettelle was able to hang on for the win.

“This is Talladega, man!” Kettelle exclaimed after the race. “This is awesome dude. Last week after that great run, I posted this win sticker and I really wanted to put it on my computer. This week it’s finally going on there… I’ve always wanted to win one of these things, this is awesome, man.

”Eric… he was pushing me so hard there off of (turn) 4 and I knew if he could just stick with me we had it won. Bob [Bryant] just kept staying on the bottom, and I knew if I controlled the middle lane it was done for, I knew we were going to have it.“

Additionally, eight drivers clinched spots in the playoffs, including the five prior to Tuesday’s race. Keegan Leahy, Bobby Zalenski, Nick Ottinger, Michael Conti and Garrett Lowe already secured their positions before Talladega. By the end of the night, Ryan Luza, Ray Alfalla and Jimmy Mullis all gained enough points to enter the playoffs.

The race began with Christian Challiner snagging the pole, while Mullis started alongside him on the front row. Zack Novak and Logan Clampitt got to the front before long, shuffling positions as they stayed two- and three-wide. Later, around lap 30, Graham Bowlin also worked his way to the lead.

After some pit stops on laps 36-38, Chris Overland reported a visibility issue. He could only see a few cars behind him, when in reality there were many more.

As the field grouped back together, Malik Ray came up in the top three with about 50 laps remaining. Kollin Keister also climbed to the front about 10 laps later. The race remained caution free for much of the night.

Smith set off the second round of green flag pit stops with about 23 to go. As each group approached pit lane, many smoked their tires, causing a few to speed. Leahy was one of those drivers, and he ended up 35th at the end.

Clampitt was in a good position to make the top 8 until this point, as he ended up hitting the wall. Further back in the pack, Brad Davies made contact with Dylan Duval and sent him sliding down the apron. Duval attempted to avoid crossing pit road and slid back up onto the racetrack at a high rate of speed. However, he gathered it up quickly, and there were no cautions.

Don't try this at home… ?@DDuval42 with a WILD save and re-entry to keep his race alive, presented by @Goodyear. pic.twitter.com/iS4T2rL9xy

The pit strategies saw Ottinger, Kettelle and Bob Bryant lead the pack at just the right time. With eight laps to go, the field tried to go around Clampitt’s battered car, but some contact was made and Jake Nichols tagged Clampitt, which sent them both spinning. The caution flag flew, setting up an intense final four laps.

Smith told the broadcast after the race that he would let Kettelle know when he was giving him a push, so he would be ready for it. It worked perfectly down the stretch, and the pair wound up first and second. Bryant was third, Zalenski crossed the line fourth and Mullis rounded out the top five.

Ottinger was sixth, Michael Guest was seventh and Conti ended in eighth. Novak and Keister finished up the top 10.

The Coca-Cola iRacing Series playoffs begin on Oct. 13 at the Charlotte ROVAL. You can watch the broadcast starting at 9 p.m. ET on eNASCAR.com/live, NASCAR’s YouTube page and iRacing’s Twitch channel.