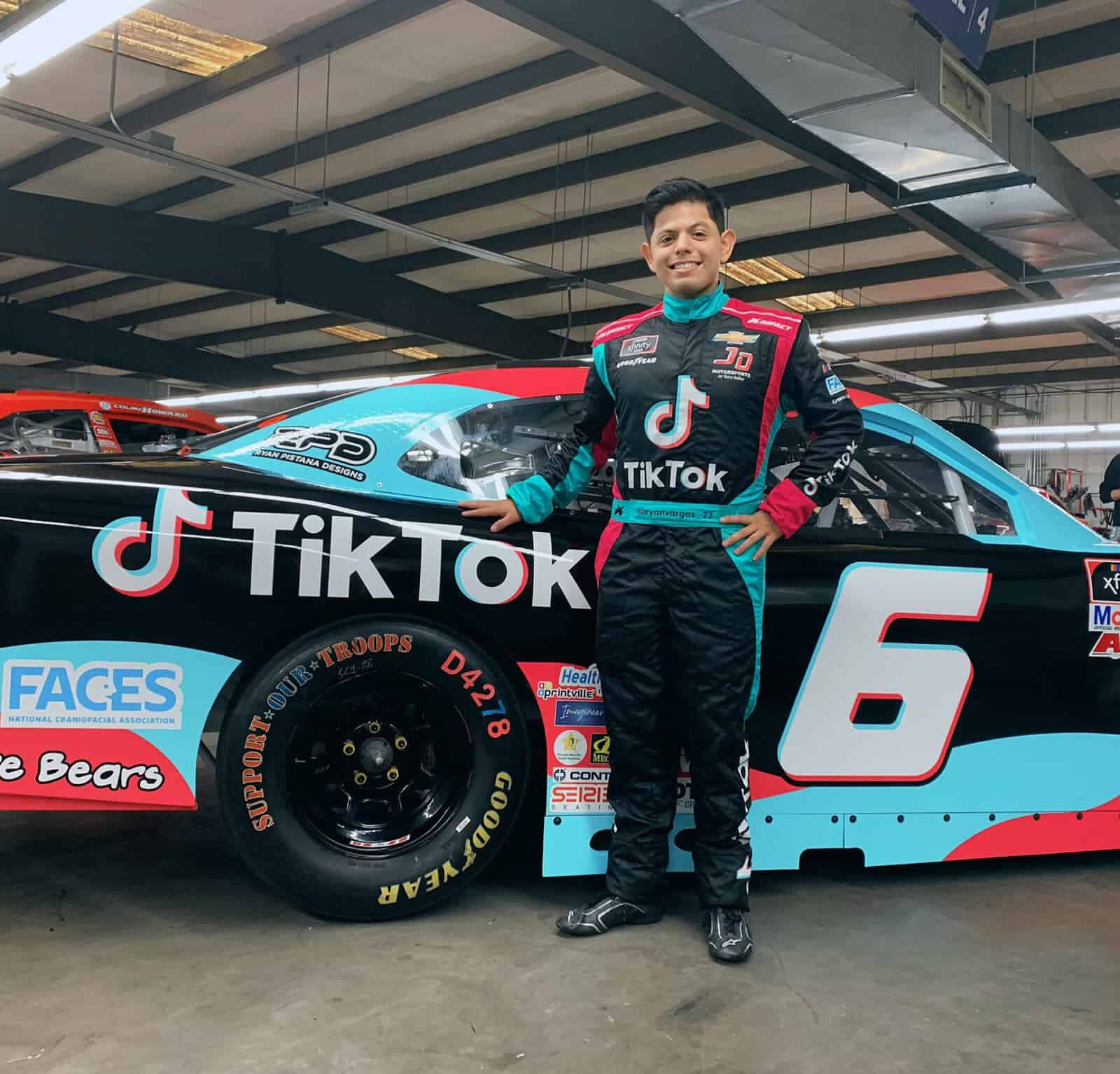 Last Thursday (Sept. 24) was one of the biggest days of Ryan Vargas‘ life. It was announced that day that TikTok would be sponsoring him for the final six races of the 2020 NASCAR Xfinity Series season.

But bringing TikTok, which describes itself as the destination for short-form mobile videos, to NASCAR is huge, for both Vargas and for the sport. It also got him emotional.

Vargas states TikTok is fully behind him and JD Motorsports, a team that is known to overachieve on a limited budget. When negotiating, the company knew JDM wasn’t one of the series’ Goliaths like JR Motorsports, Joe Gibbs Racing or Team Penske. But it was of value.

“Any time you can get a sponsor involved that’s new to the sport, it’s big,” Johnny Davis, team owner of JDM said. “Ryan put this together on his own. He brought it to us. Ryan has been a tremendous talent. When he runs our cars, they get good finishes for a true rookie, which is what he is never seeing to these tracks.

“Ryan’s done an amazing job, and I’m very glad to have him a part of our team.”

Over the past 15 months, Vargas has made six Xfinity starts with JDM, finishing a career-best 13th at Pocono Raceway earlier this season. His trio of top-20 finishes is respectable for the small race team.

The instant success isn’t foreign to the California native.

Vargas began racing later than most professional racecar drivers, having not gotten behind the wheel until he was nearly 12 years old. But once he hit the racetrack, success came right off the bat by winning a bandolero state championship in his first year.

In 2015, Vargas was awarded NASCAR Super Stock Rookie of the Year. In 2018, he was selected to the NASCAR Drive for Diversity Program, where he competed full-time for Rev Racing in the K&N Pro Series East division. His six top-10 finishes and average finish of 11th didn’t grant him another season in 2019, but he’s thankful for that experience.

The team made a business decision, scaling back to two cars from the three it ran in 2018. But that freed up Vargas to look elsewhere, which is when he made the transition to Xfinity with JDM.

In his debut race at Iowa Speedway last year, Vargas began the race in 23rd and finished 17th. He backed up that performance in his second start at Road America, placing 18th. But it was all about completing the majority of the laps.

“It was definitely an eye-opening experience because everyone in the Xfinity Series is pretty good. That’s the biggest thing,” Vargas said of making the jump. “A lot of people don’t really take into consideration the mid-pack of the Xfinity Series: JD Motorsports, Brandonbilt [Motorsports], Jeremy Clements [Racing], BJ McLeod [Motorsports] cars. We’re racing as hard as we can up there for the days we do run up front.”

Since NASCAR returned from the COVID-19 pandemic in mid-May at Darlington Raceway, Vargas has been traveling with the JDM team to the racetrack, even when he’s not competing. At the track, he’ll do anything from pushing the car through pre-race technical inspection to holding the pit sign during pit stops to checking tires in the hope that he’ll prove to people in the sport he’ll do whatever it takes to make it.

“One of the things I really attest to, when I’m in the garage area it shows the teams that I want to be there,” Vargas added. “I’m not going to stay home on weekends and enjoy a day off because I would rather be with my team, and I would rather try and help everyone on every end. It’s definitely given me a respect factor on that part.”

Davis, who has been around NASCAR for over 40 years, sees the hustle in Vargas and enjoys rewarding him with valuable seat time.

“He shows up to the shop and works. ‘I’ll do anything to prove to you I want to be here, and I’m for real,'” Davis said. “He’s dedicated to making it and learning and growing. He’s just a great big sponge absorbing everything he sees around the racecar and working on it.”

And while Vargas doesn’t mind getting his hands dirty, it prompts the driver to chase funding down to potentially run more races.

“When you’re sitting on the sidelines, sitting on pit road, doing the pit road stuff, and you know you could be in those cars and run in the top 15, top 20, it motivates you,” he said. “It’s made me want to race even more because I know what it’s like to be out there. It’s like watching your buddies go out and play when you’ve got to stay inside and do homework. It’s something you have to do, but you earn a lot more by doing it.”

After his solid performance at the Tricky Triangle in late June, the series was onto Indianapolis Motor Speedway for the inaugural road course event. Vargas, again working on the JDM travel team, said several drivers, pit crew members and team owners approached him to congratulate him on the run.

That moment was a confidence boost.

“That was something that really stuck out to me the most, the amount of support I have within the garage area,” Vargas added. “I know a lot of people have got my back. It kind of goes to show that people recognize what I do behind the scenes.”

By running the final six races of the Xfinity season, Vargas is hoping it lines him up for 2021. Starting this weekend at Talladega Superspeedway, an equalizer of sorts, his intent is to run in the lead pack all race long and be competitive. But come the season finale at Phoenix Raceway, he wants to “add stock” to his name.

Vargas said, “I hope to prove that I belong out there. I hope to prove to people that this was worth the investment and I want to continue to grow these partnerships. I’ve had a lot of good runs with JDM. It’s all about building that base, so that when we look to 2021, we can be in more races and be in the seat more often. At the end of the day, that’s what matters most.”

Davis confirmed to Frontstretch that if Vargas can find funding, he would like to run him full-time in 2021.