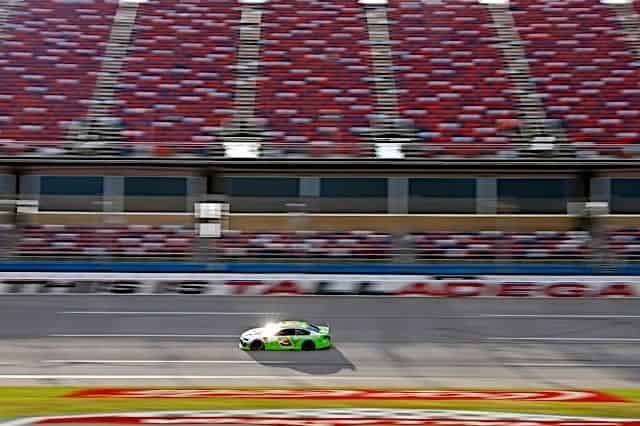 Over the years, Talladega Superspeedway has been a track where the unpredictable is always predictable. You know something unusual is going happen, but you just don’t know what it is or when it’s going to happen.

There is the “Big One” of course – that multi-car accident most often created when a mistake is made while cars are screaming at over 200 mph in extremely close quarters. But that’s routine.

But what isn’t routine are the strange, sometimes comical, sometimes tragic events that have become part of Talladega lore. They happened in such numbers that they became compiled in a sort of folk tale known as “The Talladega Curse.”

The curse, it was said, was the reason so many eerie things happened at the 2.66-mile speedway, particularly in the 1970s through part of the ‘80s.

It came into being after Andrew Jackson drove a Native tribe out of the valley that would later house Talladega. As they departed in defeat, the medicine man stopped atop a hill. He turned toward the land his tribe once occupied and chanted a curse, thus forever bringing bad luck to the intruders.

The speedway is supposed to be on Native land. If so, the bad luck curse has made its mark.

In 1973, Bobby Isaac, the 1970 Grand National champion, was driving for Bud Moore. Isaac was a fierce competitor with a solid reputation. But early in that year’s race, Isaac left the track and sped into the pits. Moore was mystified. No regular stop had been planned. It must be an emergency.

Isaac stopped, got out of the car and told an anxious, puzzled Moore that he had heard a “voice” that told him to get out of the car. “That’s what I am gonna do,” Isaac said. And he walked away.

He raced only sporadically after that and died of a heart attack at Hickory in 1977.

Larry Smith of Lenoir, N.C., won the 1972 Grand National Rookie of the Year title and was considered an up-and-coming star as the 1973 season began. He drove a Mercury for Hanley Smith and benefitted from full sponsorship from Carling Brewery. In the second Talladega event in August, he got involved in an incident in the third turn, one that sent his car into the wall.

The impact appeared moderate, which led most to believe that Smith was unharmed and might well drive away.

He didn’t. As time passed, concern for Smith increased. Then came the announcement that he had died as a result of the accident.

It was dumbfounding. As veteran TV announcer Ken Squier said: “It just didn’t look that bad.”

Later, a rumor circulated that said Smith died of a head injury. He might have survived if he had not cut out much of the padding in his helmet in order to keep his hair in place.

It was about the same time that another rumor circulated. It was hard to believe. But it said that a night before a race, cars were sabotaged in the Talladega garage area. As many as 26 had been damaged in one way or another.

The rumor was not widely circulated by the media – if it was reported at all. The race kicked off on schedule, which made it harder to believe that anything much had happened. But for quite a while afterward, several crew chiefs and crewmen said, indeed something happened. The damage ranged from scratches on car bodies to punctured tires. It was hard to believe anyone could have committed sabotage in a locked, guarded garage area. But the rumor never went away.

In 1974 an accident took place during practice for a race. How it happened was unfathomable.

There were only two cars on the track. Buddy Arrington was speeding into the first turn while fellow independent driver Dean Dalton was coming out of the fourth.

There was over a mile separating the two cars. Arrington’s car broke loose and hit the first-turn wall. It stopped there, atop Talladega’s high banking. But it didn’t stay there. It slid down the track slowly. Before it reached the grass, it was hit broadside by Dalton’s car. How that happened with so much distance between them was inexplicable.

Dalton may have thought Arrington was high enough that he could speed by. Or perhaps it was a simple case of bad timing. Nevertheless, to see two cars that originally were a mile apart collide was dumbfounding. And they were the only two cars on the track, no less.

Arrington was badly injured. He was taken to the hospital with numerous injuries, none of which were life threatening.

I called the hospital and, remarkably, I was put through to Arrington. “Steve, I can’t talk right now,” he moaned.

I understood. And I felt bad about bothering him. But I felt worse when I heard a startling report from a NASCAR executive. The accident had severed Arrington’s, uh, “manhood.” For any man, that would be a life-altering experience.

Most of us giggled about it because we didn’t think it was true, no matter who told us. It got to be a subject of laughter, even for Arrington.

In 1977, journeyman driver David Sisco was competing at Talladega when he suddenly went to the pits and stopped. He climbed out of his car and ran toward the paddock area.

There in the parking lot, his mother had been struck and killed by a truck. Sisco never raced in NASCAR again.

Perhaps the Talladega’s most bizarre incident occurred at the Winston 500 of 1986.

Just before the pre-race parade lap began, a pace car broke ranks and sped around the track at over 100 mph. Fans roared with delight.

But the situation was not delightful. It seems the pace car was stolen. A fan had raced out of the infield, hurdled fences and walls and slipped into an unmanned pace car.

He made two full laps before police and security forces were ordered to barricade the fourth turn. The pace car was stopped and the shirtless perpetrator was wrestled out and handcuffed.

His name was Darron Crowder. He was 20 years old. No traces of alcohol or drugs were found. He was charged with, among other things, grand theft auto, trespassing and assault. It’s not known whether he served any jail time. Why he did such a foolish and dangerous thing was never explained. But it was true his wife had cancer.

There are several other examples of the curse. There’s the tornado that roared with high winds and ink black skies toward the track while an ARCA driver was speeding for his life down the backstretch.

And there’s Bobby Allison’s frightening airborne crash in 1987 which tore down a portion of the frontstretch catchfence. Had his car gone into the grandstands, there would be no NASCAR today.

Not much at all has been said about the curse in recent years, but in the future something so strange, so bizarre, so hard to believe is likely to occur.

After all, it’s Talladega. It’s where an exiled Native pronounced that it would forever be a place of bad luck.