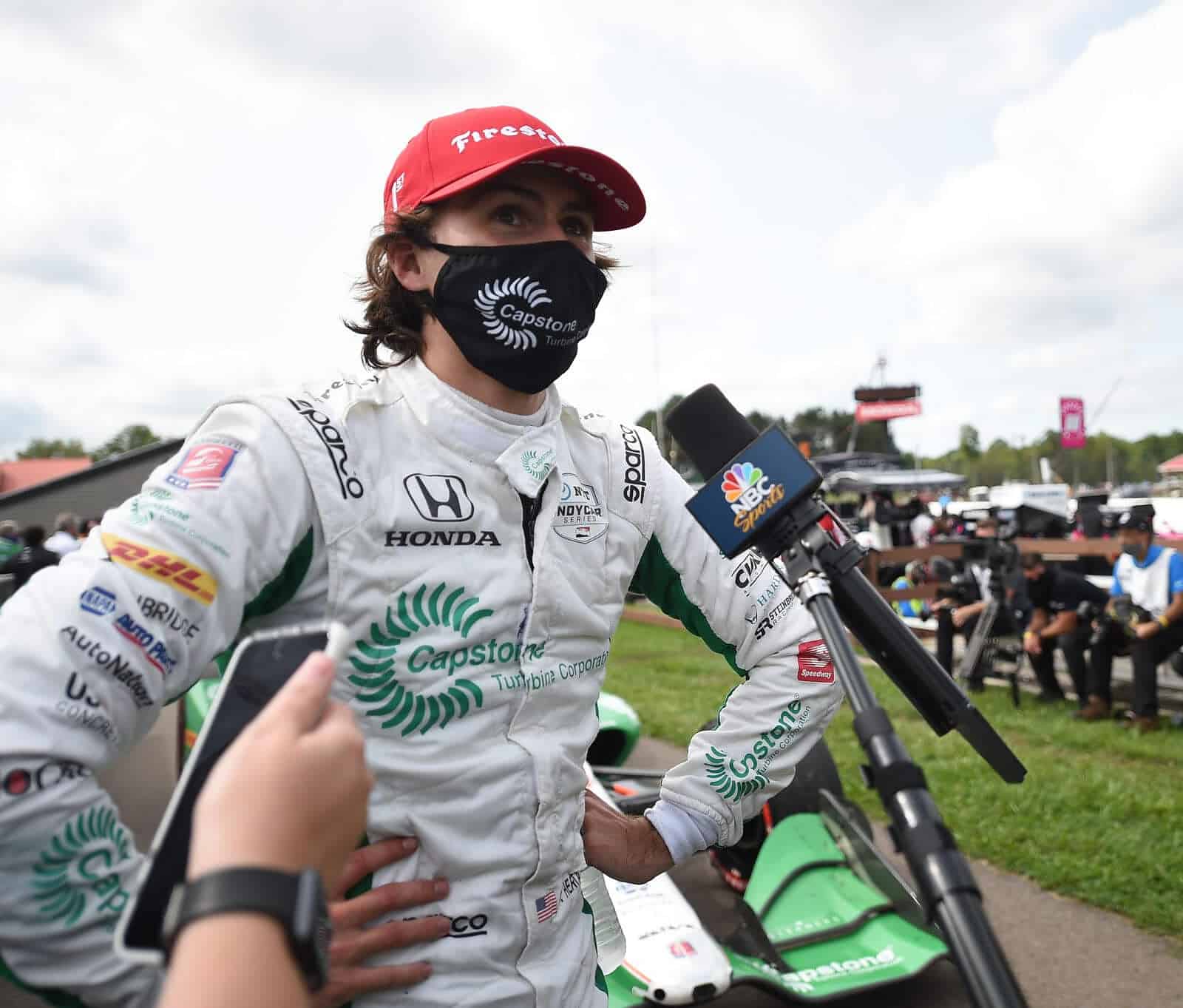 The 2020 IndyCar championship is in its closing stretch now that there are only three races left on the calendar. Scott Dixon has led the Astor Cup charge from the very first race of the year, but Josef Newgarden has slowly been shrinking the gap with strong, consistent finishes.

Here are the top 2020 IndyCar championship contenders going into this weekend’s (Oct. 2-3) doubleheader known as the Harvest Grand Prix. This is IndyCar’s first-ever doubleheader at the Indianapolis Motor Speedway road course and the first time the league has raced there more than once in a season. Who’s in the best position to capitalize on this new event?

With a generous 456 points, No. 9 Chip Ganassi Racing driver Scott Dixon has remained the driver to beat since the first race of the 2020 season—but he still hasn’t secured the Astor Cup. After a firmly mediocre Mid-Ohio weekend, Newgarden continued to close the gap between them. A Dixon championship remains likely, but it isn’t guaranteed.

It all comes down to what the New Zealander can make of the final three races of the year. He’s already won at the Indianapolis Motor Speedway road course earlier in 2020, so he has that going for him. His track record at St. Petersburg is only slightly less impressive, and a solid weekend at IMS could mean he won’t even have to worry about the final race of the year.

Drove the hell out of that car ?

After a spin early, @scottdixon9 charged back up to P10 to hold a 72 point championship lead.#Honda200 | #BankOnThe9 pic.twitter.com/oOJpUYeeI1

Newgarden has been Team Penske’s shining light in a difficult 2020, scoring 384 points and two wins. He now tails Scott Dixon by only 72 points, a number that could theoretically be made up if Newgarden can score a few more wins at the end of the season—and if Dixon has a bad day.

The Tennessee native has only grown stronger as the season progresses. His seventh place at the IMS road course event in July proved to be his best-ever finish at the track, and contesting a doubleheader there could allow him to significantly improve his results. On the other hand, a best finish of seventh isn’t all that promising for a driver who now needs to rely on that track to launch him into strong championship contention. At the very least, he’ll need to use IMS as an opportunity to continue closing the gap between himself and Dixon, then attempt to duplicate last year’s win at St. Pete.

Tough day. Missed a bit in qualifying with some tricky track conditions and that set us up for a challenging afternoon. A solid weekend overall and now we get to head back to @IMS for another double header. Eyes forward and focused on the challenge ahead! pic.twitter.com/I9Ce4lxWOO

After a difficult few years, Pato O’Ward is finally in contention for a top-three finish to the 2020 IndyCar championship with 338 points. No, he’s not likely to win the Astor Cup outright, but he’s still in a position to challenge Newgarden for second place if he finds a little more consistency in his season. His double podiums at Gateway followed by double disappointments at Mid-Ohio just can’t happen; O’Ward will need to be consistently finishing well.

O’Ward finished eighth at 2020’s previous IMS road course event, which isn’t going to cut it. He’ll need to dig deeper and find something more if he wants to contend heading into St. Pete. Looking back on his Pro Mazda and Indy Lights careers, O’Ward is more than capable of performing well at the final two tracks on the IndyCar calendar; he’s just going to have a lot more competition to get to the top.

Performance in pit lane can make or break your race result. It was no different at @RoadAmerica for the @ArrowMcLarenSP No. 5 team. #INDYCAR // @FirestoneRacing pic.twitter.com/vzFOh86VvC

Colton Herta has continued to grow as an IndyCar driver, with his 2020 performance smoothing out into stable, consistent performance (with the exception of a less-than-ideal weekend at Iowa). And with 327 points and a win to his name, he has a great shot at ending the championship in third place.

With the exception of Dixon, Herta’s fourth place finish at IMS earlier this year is the best finish on that track out of the top five championship contenders. He’s shown that he can rack up points for finishing in the top 10, and he has a great shot of really bulking up his points standing at IMS. Don’t be surprised to see Herta outshine top drivers at the end of the season.

Will Power‘s miserable 2020 season finally seems to be turning around. His 306-point total isn’t particularly impressive, but he’s suffered just about every problem you could imagine: mechanical failure, terrible pit stops, crashes, a bad attitude, and more. He—and the entirety of Team Penske—has smoothed over some of the worst of the problems, but he only has a five-point lead over Graham Rahal and a six-point lead over Takuma Sato. A top-five championship finish isn’t guaranteed.

Power has won at both the IMS road course and at St. Pete before, so he knows what it takes to make it to the top. But he’s also struggled to keep a level head on his shoulder under pressure. It’s going to take a lot of work if Power wants to finish this season out on a high.

I'm over the moon right now. Just fantastic to have the @verizon @TeamChevy car back in Victory Lane.