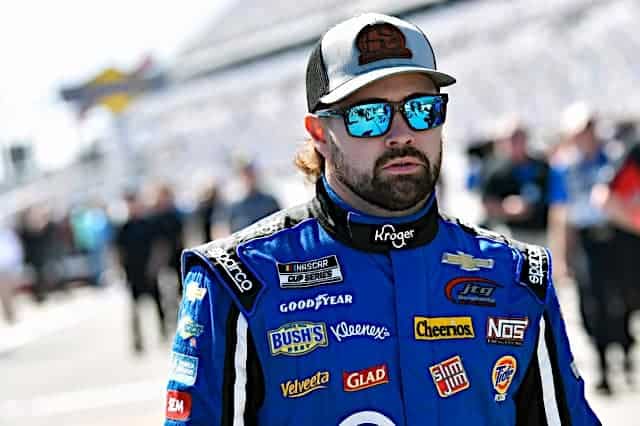 After gambling for a weekend in Sin City, the NASCAR Cup Series takes to the high banks of Talladega Superspeedway for its second race in the Round of 12. Get your NASCAR DraftKings lineups set for Sunday’s (Oct. 4) YellaWood 500!

The wide, 2.66-mile track hosts a playoff race that’s a total wild card. Pack racing means you never quite know what to expect as the full field of 39 drivers will likely stay bunched together. The top 12 NASCAR playoff starters will vie for stage points as well as the win, seeking to advance in their championship chase, while others want to spoil the party.

Often multi-car teams will work together along with manufacturers at these type of tracks. Since Denny Hamlin starts first, he’s likely to lead early with two Joe Gibbs Racing teammates right behind him. But the Big One can strike at any moment, anywhere in the field, a wreck that could take out half the main draft. Certain drivers have a tendency to avoid these crashes; survival is an important skill here. Look to sprinkle those drivers, many of them underdogs, throughout your DraftKings lineup.

And if the Big One doesn’t happen? Fuel mileage can come into play, too. For example, in June, Bubba Wallace got up to the front with less than 30 laps remaining, but ran out of gas and had to pit during the last caution. Additionally, Kevin Harvick charged to the lead in overtime with drafting help from Chris Buescher, but it appeared that he ran out of fuel on the last lap and dropped back. Results sometimes cloud these details and, in turn, affect how you create your roster.

Before I move on to my picks, let’s review what happened last week at Las Vegas Motor Speedway.

I’m going right back to the well with Logano this week. Why? Simple: he and his Team Penske cohorts are really good here. Though Logano’s ended the last two Talladega races outside the top 10, he earned four straight top fives before those. That stretch includes a victory in spring 2018, his third overall at this track. Logano also led 33 laps there this past summer and led 10 or more laps in all but one race since fall 2016.

While the No. 22 Ford Mustang driver is known to aggressively block in front of the pack, it does help Logano to stay in front and lead some laps. He’ll start in eighth, next to teammate Brad Keselowski. Look for them to work together early and often. Maybe one will clinch his way into the next round of the playoffs and hopefully, they’ll both avoid disaster.

Speaking of avoiding disaster, Blaney has done so the last two events at Talladega. He led a whopping 63 laps en route to the victory this June and 35 circuits last fall. Additionally, Blaney finished runner-up to Hamlin in the Daytona 500 and ended sixth there this summer. If Blaney can continue this top 10 trend and lead some laps, he would score fairly well on DraftKings.

While the No. 12 team made an early exit from the playoffs, Blaney still wants to take his car to victory lane. He’s certainly capable of doing so and is looking ahead to building 2021 momentum. Even though he only has three top 10s since August, Talladega is a track where the ship can be righted and momentum built for the rest of the year. Let’s hope Blaney can keep his car near the front and help you cash your DraftKings contests.

In a wild ending, Stenhouse just barely lost the GEICO 500 by a nose to Blaney. Still, he did finish second after starting 20th. Like Logano, he’s a good, aggressive blocker and has done very well at Talladega. Last fall, Stenhouse led 32 laps before crossing the line ninth; he paced the field for 16 circuits in the spring before crashing out early. The 2017 winner here feels like he’s one of the best pack racers on the circuit.

I did notice something interesting with Stenhouse’s results at Talladega: from 2016-present, he ran 16th or worse about once every three races. Hopefully, he will wheel his No. 47 Chevrolet of JTG Daugherty Racing to another top 10 and break this pattern. Also, he’ll start 26th Sunday and can score high on DraftKings if he gets a top 10.

One driver who hasn’t finished outside the top 20 at ‘Dega is Dillon. He’s often able to avoid all the trouble in front of him, weaving his way through the wreckage to get a top 15. Since he frequently starts near the back, Dillon is an asset to your DraftKings lineup as he can give you a large amount of position differential points. In fact, this June Dillon drove the No. 13 Germain Racing Chevrolet to 12th, gaining 21 spots on the track.

While it’s unlikely that Dillon will win, it would be a nice Cinderella story if he earned his second top 10 of 2020 for Germain’s final year.

While Front Row Motorsports does mostly well at Daytona International Speedway, the team has had some good runs at Talladega, too. Nemechek piloted his No. 38 Ford to an eighth-place finish in the June event, nearly pushing Erik Jones to the lead. Additionally, in the Xfinity Series, Nemechek ended seventh and sixth in each race. He and teammate Michael McDowell will try to work together to ensure a good finish.

Since Nemechek starts 23rd Sunday, he could score well on DraftKings by matching his midseason performance. Should he keep his nose clean and avoid trouble, I expect the rookie to do just that.

Haley already won two plate tracks in NXS this season at both Talladega and Daytona, although the latter came after his teammates wrecked on the last lap. He also won last year’s Cup race at Daytona in July after lightning and rain ended things early. Haley will start 35th this week and could use a better result than where he ended last season. If there’s a lot of attrition in this race, then Haley can get at least a top 20 if he doesn’t get involved in an incident.