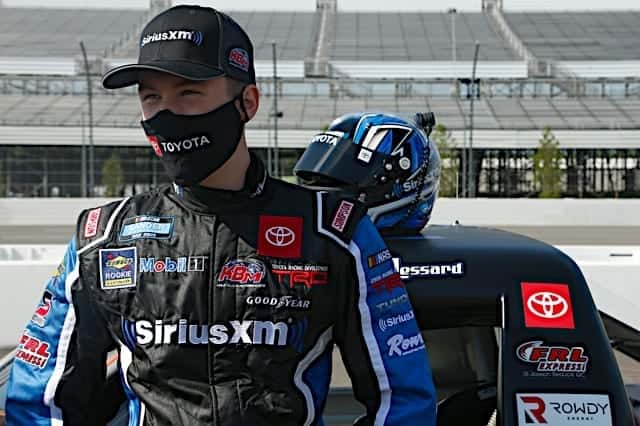 The Canada native did not make the 2020 playoffs, but secured Kyle Busch Motorsports’ first victory of 2020 at the series’ biggest track. He and Trevor Bayne were side-by-side out of the final turn when the caution flag was thrown for a wreck behind the leaders, freezing the field.

Todd Gilliland and Christian Eckes were eliminated from the postseason, meaning one KBM truck went to victory lane while the other was cut from title contention.

Polesitter Sheldon Creed led the way to the green flag, flanked by last week’s winner Austin Hill on his outside. The two lines ran side-by-side for several laps before settling down, but the Big One struck early.

Things got out of hand quickly starting when Creed made a late block, diving down from the outside lane at the end of the backstretch. Creed was hooked across the nose of Hill’s truck and slid onto the apron but retained his momentum and rejoined the track still in the lead. The stack-up behind him, though, caused a mid-pack pileup.

The carnage claimed playoff driver Zane Smith, as well as Chase Purdy, Joe Nemechek, Danny Bohn and Tate Fogleman. Dawson Cram’s No. 41 was hooked late as he tried to make it through, sliding up into the wall.

Take another look at the accident in the middle of the corner at @TalladegaSuperS. pic.twitter.com/Oox3atRo2j

Hill and Creed battled side by side on the restart, but Hill’s No. 16 got a push in the tri-oval and won the opening stage. After Gus Dean was turned out of turn 4 by Tanner Gray and slammed the inside wall, Derek Kraus scored the stage two victory under caution.

Early in the final stage, Gilliland’s engine expired and caused another accordion stack-up in the pack, sending Gray spinning violently into the backstretch’s inside wall. The issues ended Gilliland’s day at Talladega and also brought an end to his playoff hopes, all while tempers flared throughout the field.

Creed made his way back to the lead while Hill was hit with a speeding penalty on pit road. Eckes was tagged with less than 20 laps to go and saved the truck, but lost both spots and points to the field.

Creed’s time at the front came to an end when his No. 2 truck had right-rear tire problems. He came to pit road, but the caution flew for a tire husk that dropped off the truck.

With the field set to restart with two to go, Stewart Friesen and Tyler Ankrum headed up the field on the inside and outside, respectively. Lessard restarted behind Friesen, and saw an opportunity as the field spread out on the penultimate lap.

Lessard and Friesen were neck-and-neck as they took the white flag, but Friesen fell back and Bayne took his place alongside Lessard. Both drivers were nearly spun on the backstretch, while Friesen was turned into the outside wall as Eckes dove down and collected Ankrum. Hill was also involved, his truck catching on fire and coming to rest on the turn 4 apron.

Take a look at the finish of today's #ChevySilverado250 at @TalladegaSuperS. @raphael_lessard is the winner as his No. 4 Gander Truck was out front at the time of caution. pic.twitter.com/rtsZfcDUer

Bayne and Lessard were still side-by-side when NASCAR threw the yellow for the accident, but Lessard’s No. 4 was ahead by a small margin at the moment of caution. The win marked Lessard’s second top five and fifth top 10 of the year.

“Oh my gosh, that was awesome,” Lessard said in his post-race interview. “…I want to thank everyone back home, my team Kyle Busch Motorsports. This is amazing, I can’t believe it. …To get my first truck series win here is amazing, I don’t know who was behind me but he gave me a heck of a push. I can’t thank him enough, because he’s part of that win too.

“The caution came out at the right time,” he added. “I’m so happy, it’s my first time doing a burnout after a win. Man, I loved it – hopefully I can do it some more!”

"This is amazing! I can't believe it."@raphael_lessard wins at Talladega in only his second superspeedway race. Not a bad day at all for the young Canadian. pic.twitter.com/QqUlqqEBBU

Grala finished ninth in his first Truck Series race since 2017, filling in for Niece Motorsports’ Natalie Decker. Rohrbaugh scored his second career top-five finish and best result since Daytona in February, as did Anderson.

“It’s been pretty crazy,” Lessard said of his first season. “I moved [to] Mooresville, North Carolina in January…Damn, I needed that. We had a tough season, so this one feels really good.”

The Truck drivers get a week off before the opening race of the round of 8, which will be held on Saturday, Oct. 17 at Kansas Speedway with the green flag scheduled for 4 p.m. ET. Hill and Crafton took the victories in the July doubleheader earlier this year.

By my count, KBM has FIVE wins this season.