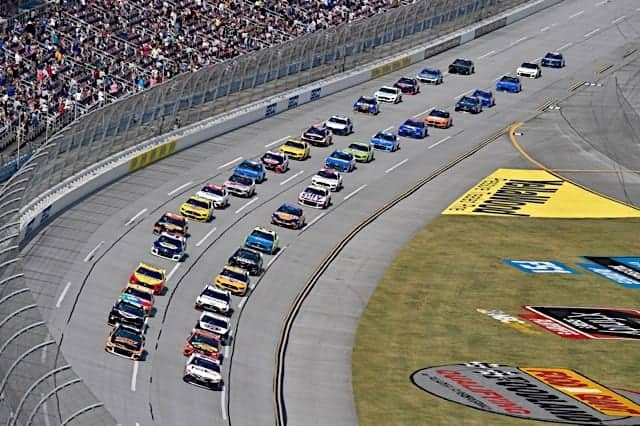 After more than 100 laps of on-the-edge racing, one push sent the YellaWood 500 over the edge and the field crashing down the Talladega Superspeedway frontstretch.

Clint Bowyer was riding Jimmie Johnson‘s bumper through the trioval on lap 108 when several taps turned Johnson downward into Kurt Busch, triggering a massive crash heading toward the start/finish line that involved 13 cars.

Busch got the worst of it, hitting the outside wall head-on before contact sent his No. 1 Chevrolet airborne. Busch’s car effectively cleared several others before crashing down on top of Cole Custer‘s Ford just past the flag stand.

Fortunately for @KurtBusch, he came down right side up in this scary crash at @TalladegaSuperS .

Plus, he's already locked into the next round of the #NASCARPlayoffs. pic.twitter.com/qq4zqXBOWx

While Busch’s car didn’t flip over, the No. 1 got air reminiscent of the X Games before settling back down on Custer’s car and, eventually, all four wheels. Fortunately, Busch’s win at Las Vegas last week already locked him into the next round of the playoffs.

“That was a wild ride,” Busch said in his televised interview. “It’s the nature of this sport, you’re on top one week with a win and everything’s fantastic, then this week you’re at Talladega. Was hoping for a nice, smooth run to gain some points, and I was just doing my job as a Chevy helper, running top five, and next thing you know I’m going for one of the wildest rides I’ve ever been in.

“Just trying to do the Chevy thing and get some points out of that stage,” Busch added. “But it’s just Talladega and these wild rides always continue.”

"Next thing you know I'm going for one of the wildest rides I've ever been on." — @KurtBusch pic.twitter.com/FYWDQkdfwT

The wreck also involved playoff contenders Brad Keselowski, Austin Dillon, Clint Bowyer and Kyle Busch. Busch was behind the accident after earlier issues and attempted to weave his way through, but slid up in front of Brendan Gaughan, who t-boned the No. 18. Gaughan was competing in his final Cup Series race.

The younger Busch had been involved in an accident earlier, and like his brother his car became airborne as well. The car only lifted a few feet off the ground and suffered far less damage.

Johnson, Brennan Poole and Daniel Suarez all received damage as well. Busch climbed out uninjured, as did all the drivers involved.

Of the cars involved, Kurt Busch, Custer, Bowyer, Suarez and Gaughan could not continue.

Martin Truex Jr. went on to win the second stage.

No he didn’t. He turned left when he shouldn’t have and took himself out again.

I think Boyer is a bonehead.