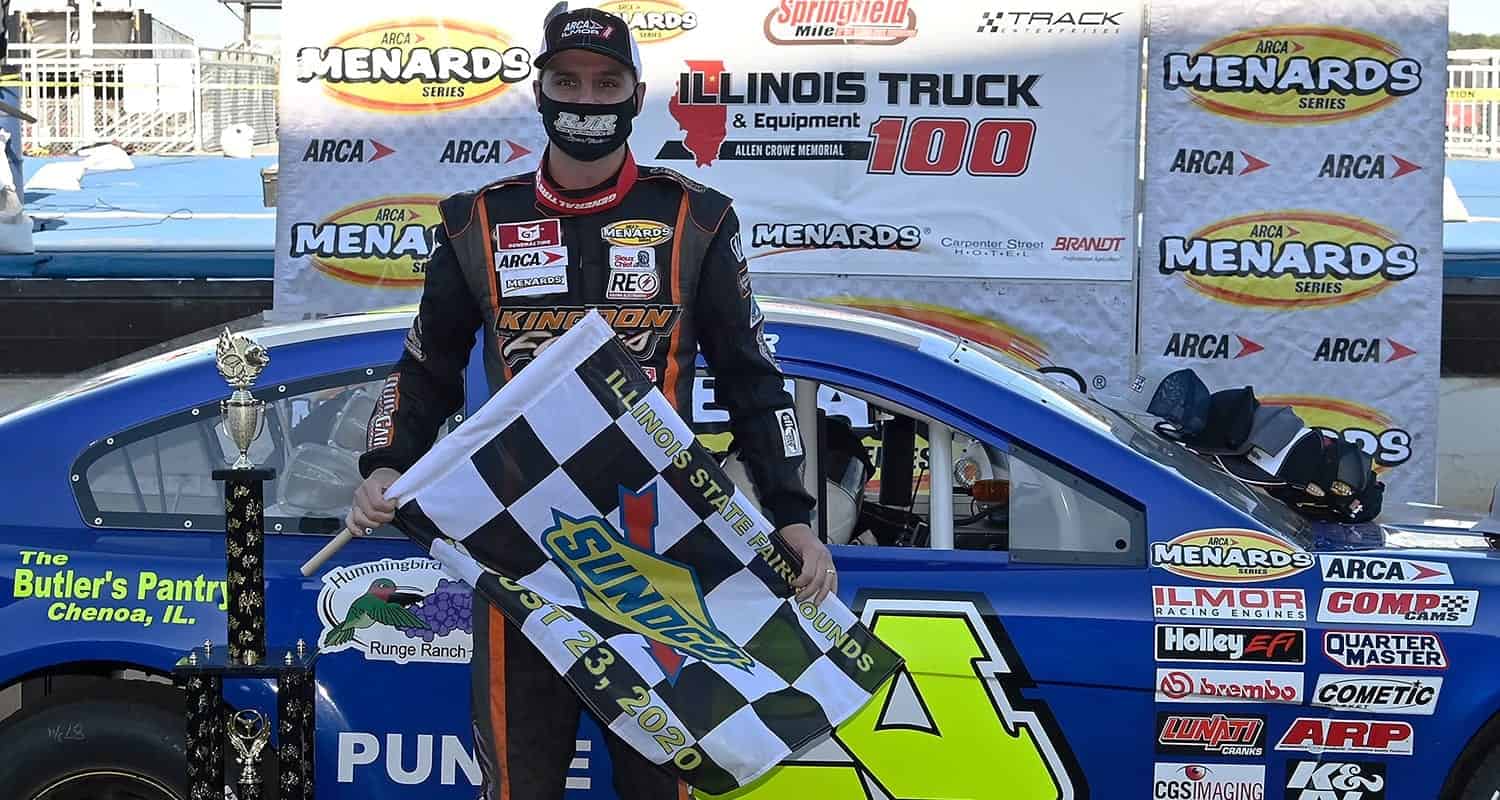 Sunday, Oct. 4, 2020, was a once-in-a-lifetime day for Ryan Unzicker. After winning the pole for the ARCA Menards Series race at Illinois State Fairgrounds, he led 102 of the 103 laps en route to winning the Illinois Truck & Equipment Allen Crowe 100. It was the first career ARCA win for Unzicker, who made his first start this season at the 1-mile dirt track in Springfield, IL.

“This moment means the world to all of our team,” Unzicker said. “To lead all the laps at the Springfield Mile, I don’t even know what to say yet. I’m very proud of my team and I’m so glad we got this new race car.”

Unzicker earned his first career ARCA victory in his 20th career start. All but one of his 20 ARCA starts have come at dirt tracks, either at the Springfield Mile or at DuQuoin State Fairgrounds. In this race, he was unbeatable, even as he fended off a hard-charging Hailie Deegan on the final restart.

? out at Springfield for @unzicker24!

Deegan finished second. She was the only other driver to lead a lap and she matched her career-best finish set in the season-opener at Daytona International Speedway.

Bret Holmes finished third and gained a few points on Michael Self in the point standings in the penultimate race of the season.

“It was hectic, to say the least,” Holmes told MAVTV post-race. “I hate what happened there on that last restart. I don’t know what happened. I’m tight on the guardrail and the next thing I know I’m shoved up to the outside. I tried to stay as clean as possible there. My guys brought a great car today. This was the best dirt car I’ve had. With the track the way it was, I just never could get a good run on the No. 24 [Unzicker]. It’s cool to see a first-time winner so congrats to him.”

Taylor Gray rebounded from both being involved in an opening-lap caution flag period, as well as spinning on lap 67, to finish fourth.

Fellow dirt ringer Kelly Kovski made his first ARCA start of this season and finished fifth.

Mike Basham finished a career-best sixth as the last driver on the lead lap.

Drew Dollar finished seventh, two laps down. He lost ground to Deegan in the battle for Rookie of the Year honors.

Venturini Motorsports teammates Corey Heim and Self finished in eighth and ninth place, respectively, both with DNFs.

Heim and Self were collected in the final caution flag, which involved Holmes as well. Holmes drove away unscathed, but the damage to Heim and Self’s cars was terminal.

In his second ARCA start of this season, Heim had trouble on lap 18 but continued on. He overtook Holmes for second place and was chasing Unzicker for the lead when the caution flag flew for a single-car spin by Kovski with six laps to go.

Self battled throttle issues for much of the race, and he also complained about the lack of visibility on track as it was the only ARCA race on a dirt track all year.

His crew chief Kevin Reed made changes to the No. 25 Toyota, and Self appeared to challenge for a top-five finish before the wreck ended his race.

Birthday boy Ty Gibbs, who started second, received the most damage on an opening lap wreck.

Joe Gibbs Racing repaired the No. 18 Toyota to continue racing, but Gibbs finished 10 laps down in 10th place.

One race remains in this ARCA season, at Kansas Speedway. Holmes won there earlier this season, while Self won at the track in the 2017 season-finale.

Holmes leads Self by eight points in the championship standings. As for the Rookie of the Year battle, Deegan leads Dollar by 25 points.