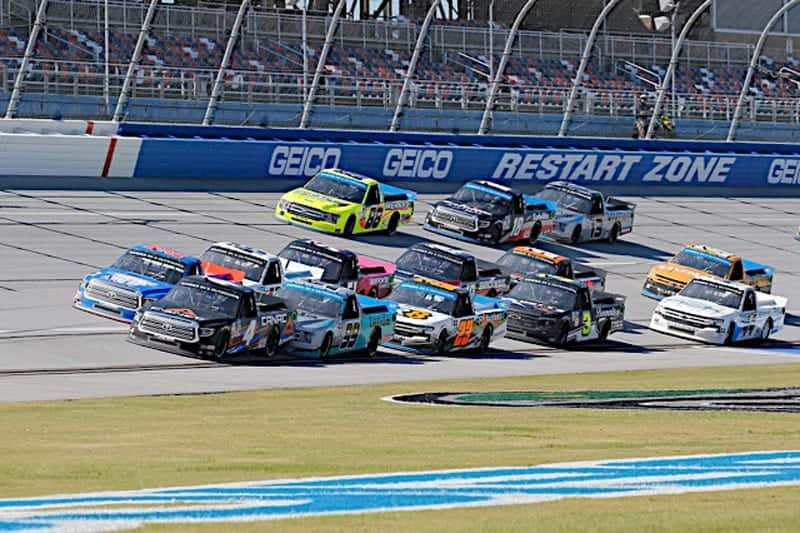 In a Nutshell: Raphael Lessard scored his first career win under caution as several drivers crashed on the white flag lap Saturday (Oct. 3) afternoon at Talladega Superspeedway. The rookie led just the final lap as he took the checkered flag ahead of Trevor Bayne. Chandler Smith, Ben Rhodes and Codie Rohrbaugh rounded out the top five.

Take a look at the finish of today's #ChevySilverado250 at @TalladegaSuperS. @raphael_lessard is the winner as his No. 4 Gander Truck was out front at the time of caution. pic.twitter.com/rtsZfcDUer

Just 13 laps into Saturday’s race, the Big One struck early. The wreck, involving 11 trucks and resulting in a five-minute red flag, ended the day for seven of the drivers involved including Zane Smith. But given the uncertainty of Talladega and the 29-point advantage he had coming into the race, it made for an 80-lap wait to determine whether Smith would continue to race for a championship.

Please god. I’m praying every second please please please let him make the round of 8. He deserves it so much. ?? https://t.co/cUuyghhhZX

Despite his early exit, Smith made the Round of 8 by squeezing through with 11 points to spare. He, along with three of his GMS Racing teammates move forward to the next round, thanks in large part to the 22 playoff points Smith scored throughout the regular season.

Thank you guys for all the love and support today and throughout the year. I know zane wants this so hard not only for himself but all you fans as well. ❤️

The next round brings with it Kansas Speedway, Texas Motor Speedway and Martinsville Speedway

When the checkered flag flew over Talladega, it marked the end of the Round of 10 in the Truck Series playoffs. For Todd Gilliland and Christian Eckes, it also meant the end of their run for the championship.

Eckes entered into Saturday’s race with a slim six-point advantage over Ben Rhodes at the cut line, and after finish third in stage one to Rhodes’ fifth, he gained a mere two points. Then came the speeding penalty on pit road that put him at the back of the field. Eckes wasn’t in the top 10 at the end of stage two and was in a position toward the end where his fate was going to come down to the finish.

As the laps wound down, the margin flirted between Eckes being above the cut line to as far as four to six points below the cut line. But the white-flag crash that collected a handful of trucks and ultimately resulted in the yellow that froze the field also collected Eckes. He ended up 18th and missed making the next round of the playoffs by eight points.

“I just came up short. Sucks that we are not going to be able to move on to round two, but in the same aspect my Safelite Toyota team tried hard,” Eckes said after the race. “We did all we could. I’m sure we made some mistakes on the day like the pit road penalties and some other things, but we will move on to the last four races and give the playoff guys hell.

“We don’t have any championship hopes on the line, unfortunately, anymore, but in the same aspect, there is still plenty of team goals to achieve. We will do the best we can. I wish we did a little bit better in the first two races of this round to separate us, but that’s 2020 and we will move on to the next four.”

For Gilliland, the situation was a little different. Facing a 19-point deficit to the cut line, the No. 38 team knew that a victory was the best way to move forward. But given the nature of Talladega, Gilliland also fought for as many stage points as possible and managed to score 13 in the first two stages. His championship hopes came to a screeching halt with an engine failure that ended his race on lap 47.

An engine problem ends his Saturday and his #NASCARPlayoffs in 2020. pic.twitter.com/YyfIWckFpP

While their championship runs have come to an end, both drivers still have the final four races this season to make their mark on the season.

Just four races ago, Trevor Bayne stepped into the No. 45 Niece Motorsports Cheverolet to make his first Truck Series start, and his first two races back were forgettable, at best, with mechanical failures. Fast forward to Bristol Motor Speedway where he ran well but was disqualified, and suddenly his average finish in three races was a dismal 30.7.

Enter Talladega. After staying out of trouble throughout the race, expecting the early Big One that did happen, Bayne made his move toward the front with 15-20 laps remaining and found himself at the front of the field on the white flag lap. But the way the caution flew when the field wrecked, Bayne was denied the victory and scored a second-place run. It was his best finish in any of NASCAR’s top three series since a third-place run at Talladega in 2017.

“I’ve never driven a truck in a superspeedway race before, so I had a learning curve on how to side draft, how to move around, what lane carried momentum,” Bayne said during a post-race Zoom press conference. “It’s similar to a Cup car but a little bit different. We were glad to be leading down the backstretch. Looks like we lost by six thousandths of a second.

“I’m really proud of this team, really thankful for the opportunity. Five, six weeks ago, I thought I may never run another NASCAR race, so to have a shot to come here and win, to be competitive at Bristol, it’s been a lot of fun and I’m really thankful to be back.”

Bayne also confirmed he will finish out the rest of the 2020 season behind the wheel of the No. 45 Chevrolet. As far as whether he continues to race into next season, it’s something he’s working on but wants the right opportunity for. Translation: if he can run in competitive equipment, Bayne would definitely return to racing full time.

Had a blast today! Solid top-10 finish. Thank you @NieceMotorsport and @NatalieRacing… see you back at the track soon!!! ?? pic.twitter.com/EMhJFxkQjC

Gus Dean's crash from last year's race looks so similar to the one just now, but in 2019 it happened off of Turn 2 and today he hit the inside wall off of Turn 4 head on. pic.twitter.com/IKa3mPNqXl

Rookie of the Race: Lessard

(1/2) A dream come true! We knew the No.4 @canac_ca Team had the chemistry, talent and motivation to make it happen: FIRST WIN in @NASCAR_Trucks and our second Superspeedway ever ?? pic.twitter.com/ZnPZQ9VGn3

(2/2) I couldn't think of a better way to thank @canac_ca, @ToyotaRacing, @KBMteam and the investors! ????? ??? to my teammates, to all those who work for the Raphaël Lessard Racing Team… This is just the beginning! pic.twitter.com/UaCUp4dgPN

Wasn’t meant to be. Ran up front and had a great @safelite Tundra, wrecked coming to the checkered. Proud of the effort from my @KBMteam, we won’t be racing for a championship but still have numerous team goals to achieve.

Get me a @Lapazproducts marg.

Points Update: Austin Hill and Sheldon Creed head into the Round of 8 tied for the point lead. After spending much of the Talladega race wondering whether he would even move through to the next round, Zane Smith is third, followed by Grant Enfinger. Brett Moffitt rounds out the top five.

Christian Eckes and Todd Gilliland, who were both eliminated from the title race at Talladega sit ninth and 10th, respectively.

My first ? in @NASCAR_Trucks. Can’t express how satisfying it was!

6th place at Talladega! Still smiling. We fought hard for that one. So incredibly proud of all our guys and the strategy we had and stuck to today. This last month has been a tough one but today is a perfect example of why you never give up. ???? pic.twitter.com/gylpwwEDJM

Thankful that Kyle was alright!!! Not only is he our interior and underneath guy at the shop but he also is our rear changer on race day! He gives it all he’s got every day ?? https://t.co/BJlD0dzNej

Up Next: The Truck Series heads to Kansas Speedway in two weeks to kick off the Round of 8. Coverage for the Clean Harbors 200 begins at 4 p.m. ET on FOX Sports 1; the race can also be heard on your local MRN affiliate or SiriusXM NASCAR Channel 90.

Baine was screwed by NASCAR.