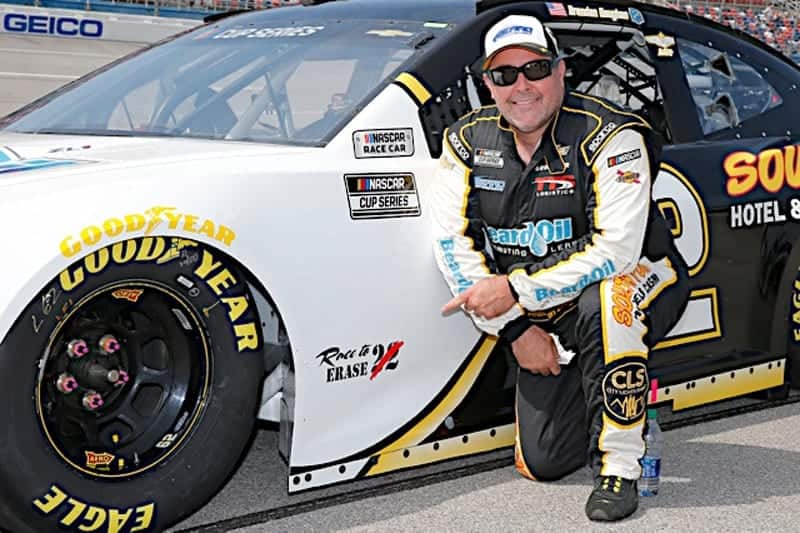 Denny Hamlin made a hang-at-the-back and avoid trouble strategy work on Sunday (Oct. 4), winning at Talladega Superspeedway with a last-lap pass. That’s after staying out of the fray for much of the day and working his way into position through multiple final shootouts. A bad call from NASCAR certainly helped as Hamlin was on the apron in the final turn, below the double yellow line. While he was initially pushed down to that point on the racetrack, he had plenty of room to move up before advancing his position but chose not to.

In the end, NASCAR decided that once he was forced too low, Hamlin was allowed to stay there. So even though he passed two cars below the line, Hamlin took the checkers, giving the No. 11 a pass into the next round of the playoffs.

Meanwhile, Matt DiBenedetto got penalized for a violation of the exact same rule after he finished second and NASCAR determined he forced William Byron below the line. It appeared that Byron already had wheels down there when DiBenedetto made a late block, but NASCAR decided otherwise, dropping him to 21st. Does NASCAR use the rule to manipulate the outcome of races? Not really. But it’s certainly used very, very selectively, and it’s easy to see why fans think they’re inconsistent.

It was an inauspicious end to a racing career: getting caught in a multi-car crash. That said, Brendan Gaughan walks away from NASCAR competition with a respectable resume in his rear-view mirror. He had a NASCAR Gander RV & Outdoors Truck Series title snatched from him in 2003; his only full-time Cup season ended in disappointment a year later.

However, Gaughan had a handful of wins in the Truck Series and some strong Xfinity Series seasons as well. Gaughan never really had competitive Cup equipment, or a second full-time opportunity. But what he did have, everywhere he raced, was fun.

You never saw Gaughan without a smile on his face, and his outgoing nature made him a fan favorite wherever he went. He genuinely enjoyed competing at a level where so many drivers forget how. It’s a gregarious personality that, really, isn’t a bad way to be remembered at all.

Last week’s winner Kurt Busch is already in the next round of the playoffs after a win last weekend at Las Vegas Motor Speedway. He’s lucky he is because a mid-race crash triggered by Clint Bowyer sent the No. 1 Chevrolet airborne.  No one was hurt in the crash, in which Busch landed on the roof of Cole Custer’s No. 41, but the wreck put an end to his day.  Busch finished 32nd, dropping to 10th in the standings, but he doesn’t have to worry about points heading to Charlotte Motor Speedway next week.

Point leader Kevin Harvick almost avoided trouble and was looking for a top finish to lock him into the next round of the playoffs. Instead, he got caught up in a pair of incidents on lap 189 and 194, forcing him to settle for 20th. The finish cost Harvick the point lead to Hamlin, but he’s still in good shape for a title run with a 68-point cushion over the cutoff advancing him to the Round of 8.

What Talladega has become is barely a shell of what the races used to look like when winning was a combination of drafting strategy, patience and timing. On the surface, those skills are still needed, but it’s also an artificially enhanced event where the package ensures that the cars will run close together.

The current Talladega setup breeds unpredictability, but it also breeds carnage. While the anyone-can-win angle is not a bad thing, it’s become more about waiting for the crashes. Then, fans must hope NASCAR applies its rules fairly and consistently; they failed at that in Sunday’s event. It’s a show, sure, but is it really the type of racing the sport should be proud of?

While it may not all be decided this week, Silly Season is still very much underway. From DiBenedetto’s post-race interview at Talladega, it appears that he’ll be in the free agent mix. The deadline to re-up with the Wood Brothers for 2021 has come and gone and it doesn’t appear to be in DiBenedetto’s future. If he’s given walking papers, NASCAR Xfinity Series driver Austin Cindric will land in the No. 21 instead. The Woods get technical help from Team Penske and Cindric’s father is a top Penske executive.

With Erik Jones future also undecided, among others, there are still several teams with questions as well. The No. 48, in particular, hasn’t been filled, a top-tier ride with Hendrick Motorsports. Kyle Larson appears to be the top choice, but there are still plenty of hurdles to clear, including with Chevrolet and presumably sponsor Ally. No announcement has come about an extension for Bowyer, with NXS regular Chase Briscoe looking like a candidate for that seat as well. There are some smaller teams who could have openings, too.

The 2021 schedule and playoffs have been a distraction from these remaining questions, but there are still plenty of answers to seek. Expect them to take center stage once again later this month.

How… is that playoff picture looking now?

Frankly, for the four drivers below the cutline heading into the Charlotte Motor Speedway ROVAL, their prognosis appears pretty bleak. Austin Dillon and Kyle Busch are both 21 points back. It’s not an insurmountable deficit, but without winning, that’s relying on someone else to have a bad day, and a driver can only control his own destiny. They don’t have to win, but they have to be very, very good and hope that Joey Logano and/or Alex Bowman are very, very bad.

While there are only two previous ROVAL races to go by, odds are not favorable for either. Bowman has a third-place average at the ROVAL with a pair of top fives, and Logano has averaged a 10th-place result. Compare that to Dillon’s average finish of 31st; Busch’s is a miserable 34th. Sure, they can buck the trend, but it’ll be an uphill battle.

Behind them, Bowyer (-38) and Aric Almirola (-48) will need to win to advance. Gaining points on Logano is daunting enough, but they’d have to get by both Dillon and Busch as well. Leapfrogging all of them is highly unlikely.

That means the next round appears already set, barring disaster for one of the top eight. Sure, someone could come through in the clutch, and that will keep things interesting, but don’t count on much changing now.

Great shout out for Brendan Gaughan. Going to miss him. It was always fun when he was interviewed. He did a lot for the sport even though it may not be on paper! Just a good guy.

“Does NASCAR use the rule to manipulate the outcome of races? Not really.”

Really, what is the flavour of the NA$CAR Kool-Aid?

If Matt had done what Hamlin did and nosed out Hamlin, does anyone believe Matt would have kept the win?

Let me answer that…. No.

Once again NASCAR screws over Ford teams and allows Toyota and Chevy teams a pass. Anyone think that NASCAR is not rigged look at the finish and inconsistency and complete lack of enforcement of NASCAR’s own rules.
Thought this sh!t would end with the new leadership but guess not.

Every driver should just ride around at minimum speed till the last 20 laps …….RIGHT DENNY

Hamlin spent 178 laps out of what turned out to be 200 riding at the back of the field. What happened to NA$CAR’s “rule’ to drive at 100% for each example of Brian’s product? It seems there is still the Brian Effect at play.

Maybe the teams decide what they are going to do and do it. What’s NASCAR going to do tell them don’t come back? Fine them and if the team doesn’t pay?
Don’t think any of it matters anymore.

AGREE 100% BS WIN FOR DENNY, he wasn’t the only one through, that’s not racing