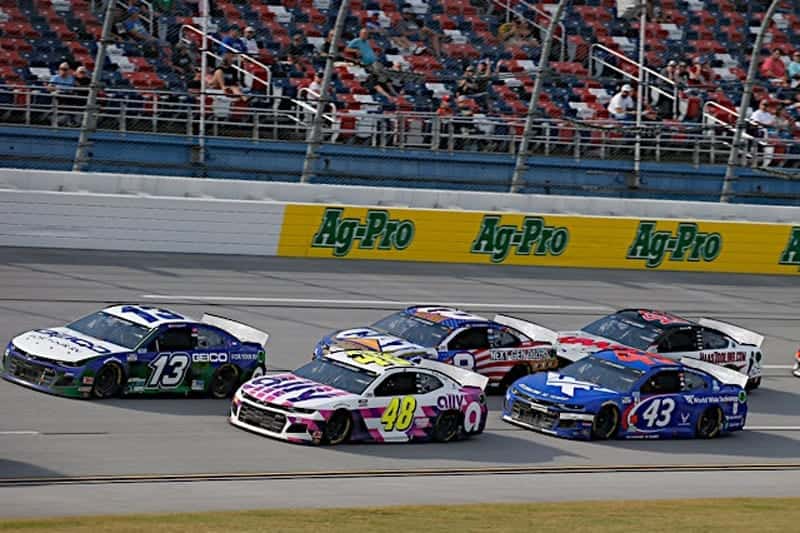 As usual, a NASCAR Cup Series race at Talladega Superspeedway resulted in a “Big One.” No, not just a big crash, though there were plenty of those. I’m referring to a big group of underdog teams scattered throughout the top half of the finishing order.

Leading the line both literally and figuratively was Ty Dillon, who was credited with third after a penalty dropped presumed runner-up Matt DiBenedetto down the standings. Dillon, whose Germain Racing team will cease operations at the conclusion of 2020, earned his first career top-five finish, as did the team.

The first component of success at the 2.66-mile behemoth ring of asphalt is survival, and Dillon did that part flawlessly. The No. 13 Chevrolet didn’t have a scratch on it at the checkered. But during his four-year career with Germain, Dillon has proven himself to be a solid player on the big tracks and translated the opportunity into an uplifting parting gift for both himself and the Germain team.

“It feels great,” Dillon said post-race of the finish. “I’m sure everyone is aware our team announced it’s selling as has been sold. […] We promised each other when it was announced we would all give everything we had till the end. This was a statement for our team.”

Finally, the other drivers in this category pulled their weight a bit. Not just a little either. Six other underdog drivers joined Dillon in the top 20 at the end of the race, with five of them earning their best ever finish in a Cup event.

John Hunter Nemechek was eighth, which matched his career best from earlier in the season (spring Talladega). Joining him in the top 10 was Brennan Poole, who came home ninth. The Texas native beat his previous best finish last month at Daytona International Speedway by six spots.

Justin Haley, running for underfunded Spire Motorsports, might not have earned a career high with his 11th-place finish, but it was far and away the best showing since his stunning rain-shortened win at Daytona last July. Quin Houff finished 13th, a mile ahead of his top finish prior to Sunday’s event (23rd). Also getting in the top 20 with career highs were Joey Gase in 17th and Cody Ware 19th.

Bubba Wallace was swept up in a pair of late-race incidents, but looked to be a serious threat for the victory beforehand. He led a career-high 10 laps and was trying to maintain his lead when he was clipped by another car and glanced off the backstretch wall. The team made repairs and Wallace worked his way back into the top 10, only to be turned into the turn 3 wall in a crash with a handful of laps remaining. Though he finished 24th, Wallace probably put on the biggest show among the underdog class with Richard Petty Motorsports.

Saturday was also the final race in the NASCAR Gander RV & Outdoors Truck Series Round of 10, and it too saw an underdog finish second. Although Trevor Bayne is a former Daytona 500 winner, the Niece Motorsports truck he piloted isn’t an elite ride. Joining Bayne in the top five was owner/driver Codie Rohrbaugh, who earned his best career finish. Jordan Anderson wound up sixth, Kaz Grala finishing ninth making his first Truck start in nearly three years and Derek Kraus finishing 10th. Just squeezing into the top half of the rundown were Clay Greenfield in 14th and Bayley Currey in 15th.

It’s time to dodge a few turtles as the Cup Series hits the Charlotte Motor Speedway ROVAL this weekend. Michael McDowell always seems to be the guy when we go to a road course and I wouldn’t expect that to change this time around.

Joining Cup at the ROVAL, the Xfinity Series underdogs have a much more adept group of talent in terms of turning right and left. Labbe will likely run well, Josh Bilicki could have a solid day, and I’d look for Williams, Jeremy Clements and Hill to potentially wind up in the top 15 as well.

The Truck Series teams enjoy a much needed week off before heading to Kansas on Saturday, Oct. 17.

But damn it was a good day for our team! Fun leading some laps and learning a ton.

We need some fuel pumps that work. https://t.co/XlnpE3ZikT

11 words every small team driver loves to hear:@P1_Houff told "he's gonna help you, he has no choice he has damage"

P-8!!!!!! So excited to keep this super speedway top 10 streak for this 07 @SSGLR0708 group. Ton of fun to race with them. Thanks @TrophyTractor @blackdraftshine and @RickWareRacing for making it happen!!! HECK YEA!! @XfinityRacing @NASCARonNBC #PatienceNeverGiveUp #Dega pic.twitter.com/WQgi4NcisD