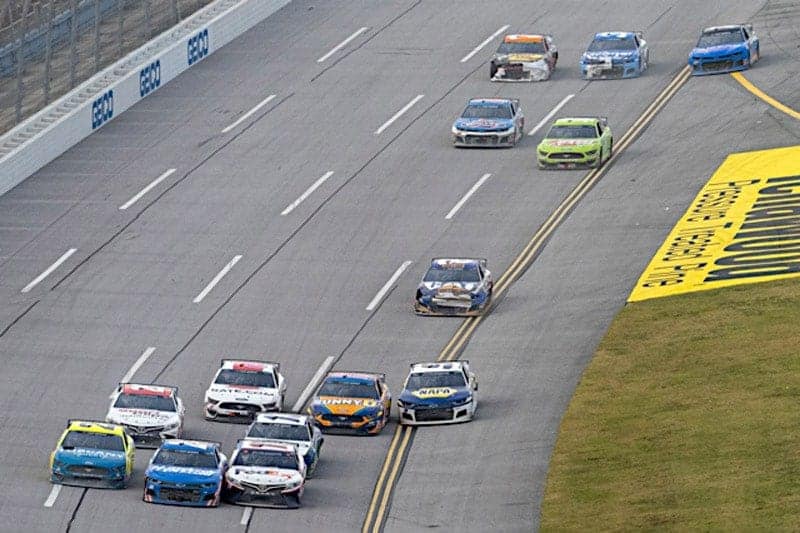 Sunday’s (Oct. 4) NASCAR Cup Series playoff race was a typical Talladega Superspeedway thriller.  But once the dust had settled on its photo finish, the YellaWood 500 looked more like the yellow line 500.

Following a chaotic last-lap ending, Denny Hamlin walked away with the checkered flag.  Behind him, drivers who appeared to score top-10 finishes were issued post-race penalties instead.  Several other drivers with strong closing moves, Hamlin included, avoided any negative post-race adjustments to their finishing positions. Their places in the running order stood despite being implicated in incidents that caused other drivers to get penalized.

Hamlin’s .086-second victory was a thrilling conclusion to a great race.  But once the double yellow line rules came into play, the post-race commotion got confusing.

Unfortunately, that should come as no surprise.  The double yellow line rule has been around for almost 20 years now, but the terms of its enforcement only seem to get murkier.

The rule initially came about following the death of Dale Earnhardt in the 2001 Daytona 500. Moving forward, NASCAR instituted a new policy for Talladega and Daytona International Speedway.  A double yellow line was painted around the bottom edge of the track surface at both speedways.  NASCAR declared that any driver who advanced their position below it would be penalized.  Additionally, drivers who forced another racer below the line could face consequences at NASCAR’s discretion.  The idea was to prevent drivers from racing on the apron and creating a potentially dangerous situation.

The problem was enforcing these rules evenly and consistently became a lot more complicated than NASCAR foresaw.  Suppose a driver went below the double yellow line to start a pass but returned to the legal racing surface to complete it?  What if a driver got forced below the double yellow line but forced his way back up onto the track at the expense of the first driver?  And when, exactly, would NASCAR enforce the stipulation about penalizing a driver who forced someone else below the line?  What could drivers get away with and what would draw a black flag?

NASCAR has never sufficiently answered these questions.  As a result, the sanctioning body has made a mess of what started out as a well-intentioned rule.

The last lap of Sunday’s race highlights just how tricky the enforcement of the double yellow line rule can be.  Matt DiBenedetto led through turns 3 and 4, followed by Erik Jones, Chris Buescher, William Byron and Hamlin.  Entering turn 4, Byron slipped past Buescher and Jones, then tried to race by DiBenedetto down low.  DiBenedetto came down to block, causing the Nos. 21 and 24 to make contact, which pushed Byron below the yellow line to the apron.

Jones and Buescher, meanwhile, were side by side as well in the low lanes trying to get a tow from Byron.  Hamlin caught all four drivers with a huge run and ducked below the double yellow line to avoid running into Buescher.  Once below the line, Hamlin stayed there until he pulled even with DiBenedetto and Byron.  A timely push from Ty Dillon allowed Hamlin to beat DiBenedetto to the finish line by .023 seconds.

So, in the above scenario, who violated the rules?  In NASCAR’s determination, DiBenedetto forced Byron below the line, so the No. 21 was penalized.  In addition, Chase Elliott, who was running just behind this group, received a penalty for passing Buescher below the line in the tri-oval.  On the other hand, NASCAR deemed that Hamlin was forced below the yellow line by Buescher, so there was no penalty to the No. 11.  Buescher was not penalized, either.

Confused?  Me too.  And, for that matter, so was NASCAR.  About an hour after the race concluded, Elliott’s penalty was rescinded. Instead, NASCAR then issued a penalty to Buescher after all for forcing Elliott below the yellow line.

Were any of NASCAR’s decisions correct?  The call against DiBenedetto made sense given how abruptly he pushed Byron below the line.  That’s not anything malicious on DiBenedetto’s part, just typical superspeedway racing.  It is also a clear violation of the rules.

But the rest of NASCAR’s penalties, or lack thereof, call their ability to consistently enforce the double yellow line rule into question.  Here’s what NASCAR Vice President of Competition Scott Miller had to say about the penalty originally issued to Elliott.

“On the No. 9, he obviously just pulled out and passed underneath the yellow line,” Miller said.  “I think all of it was, from our vantage point, I think fairly clear cut.”

If the penalty against Elliott was “fairly clear cut,” why did it get reversed?  Furthermore, what exactly did the No. 17 do to warrant a penalty instead?  As of this writing, it remains unclear.

Yet the biggest head-scratcher here is how Hamlin, the race winner, avoided a penalty.  In the replay of the last lap, Hamlin appears to go below the double yellow line before reaching Buescher’s quarterpanel.  As the No. 17 was blocking his lane, Hamlin had three choices: try to swing high, run into the back of Buescher, or go below the yellow line to pass him.  Hamlin chose the third option.  In doing so, it allowed this year’s Daytona 500 winner to make the decisive pass and probably avoid turning the No. 17.

But what happened to Hamlin is not the same thing as getting forced below the double yellow line.  Unlike Byron, who got pushed below the line by DiBenedetto, Hamlin had a choice.  What’s more, Hamlin stayed underneath the line until he passed not only Buescher but Byron, DiBenedetto and Jones.

It is indisputable that Hamlin advanced his position below the double yellow line.  Even if he was on the apron to avoid hitting Buescher, is it still not against the rules to pass drivers who did not force you below the line?  NASCAR has been far less lenient with this rule in the past.  At Talladega in 2008, Regan Smith could have argued that he was trying to avoid a last lap crash with Tony Stewart.  But Smith wound up as the one penalized for passing Stewart below the line, despite a good bit of evidence that Stewart forced Smith down in the first place.

A huge no call on Hamlin, along with “clear cut” penalties that get overturned, is further evidence that NASCAR needs to scrap the double yellow line rule.  While driver safety should be of the utmost importance to the sanctioning body, this sport has come a long way in 20 years.  Several redesigns of the cars, along with the implementation of SAFER barriers, have prevented countless more injuries than an out-of-bounds line.  For that matter, NASCAR has still never explained how confining the drivers to a tighter space is supposed to prevent more crashes.

But the biggest reason to get rid of this rule is NASCAR simply cannot enforce it consistently.  What Hamlin did on Sunday was not significantly different than what Smith did 12 years ago, but only Smith got a penalty.  Not to mention that the Buescher/Elliott reversal looks incredibly silly.  With wins and championships on the line, NASCAR cannot let judgment calls and muddled rules impact the finishes of these races.

When Miller and his associates can’t even figure out who should get penalized according to their own rules, it is time to take a red pen to this yellow line rule.

Who does Hamlin drive for? End of discussion!

Who does Elliott drive for? End of discussion!

Ridiculous non call on Denny. And ridiculous make believe stories by Nascar spokesman. Ridiculous is everything Nascar said and did at the end of the race. We can all see the replay frame by frame, we aren’t blind and dumb Nascar. Correct the damn call.

Hamlin got a gift. Nascar needs to either enforce the rule equally, or just ditch it. It’s stupid to have it in the first place.

SSDD in NOOSECAR land. Hamlin did pass below the yellow line and was rewarded with the victory. Wonder why? Is it any wonder that NASCAR has more rules than common sense. Well, the rich get richer and the lesser teams go to the rear. Just as it should be, right NOOSCAR?

Also note that what was BUescher supposed to do? He hd the 20 on his outside and at his right door was well. Argument could be made that Erik Jones forced Hamlin below the line but forcing the 17 to the lower lane.
NASCAR screwed the pooch on the end of a fairly entertaining race.
Hamlin’s win should not stand. He made zero effort o get back up on the track. Yes argument is made for the forcing (sort of) but Hamlin’s continued action warranted a passing below the yellow line penalty. He went several hundred yards before moving back up onto the track.
Seems to me 3rd place should have been the winner.

Problem is NASCAR needs independent officials who do not socially spend time with drivers or owners or crew members. The double-yellow line is no different than a sideline in a basketball game. If the defender has both feet inbounds, and an offensive player contacts, it is a charge. If one foot is out of bounds, it is a block. Players cannot go around, out of bounds, and then come back in and participate. Same in football, you go out of bounds and participate, it is a foul in many situations, not all.
Simple, hire officials who have integrity, not cronies. NASCAR tower officials have ZERO INTEGRITY. We must accept that fact because the monopoly, (not industry as the ignorant pose it) dictates who wins and loses. It is not an honest sport, but entertainment.
Watch how the cautions fall Sunday to keep Golden Boy Elliott in contention for the final four. Not his fault, NASCAR’S. And remember, Rick Hendrick plead guilty in Federal Court to Bribery.

“Golden Boy” is now the best road course driver in NASCAR. Keep that in mind before you throw shade on next week’s results!

Furthermore, “Golden Boy” has lost opportunities to win because of cautions falling at the WRONG time for him.

I was at the Roval last year. The Stenhouse caution should have never happened. Facts are facts. He benefits when they needed.
You are certainly encouraged to have your opinion. Mine will not change.

It also looked like to me that Byron was already below the yellow line before DiBenedetto came down- so how was he forced there? The one thing consistent about the enforcement of the rule-Hamlin, Stewart and Elliott are all bi names from big teams.

What Regan Smith did in ’08 resulted in Carl Edwards in the fence and Brad’s first win in ’09. A total bull poop call on NASCAR’s part.
It’s done and I’m pissed.
Maybe there ought to be independent officials or paint the line white. Or, enforce the rule correctly.
One fine finish though.

Run the road course at Daytona and Dega before some one gets killed.

Why is media using the yellow line as a reason to bail out Nascar from this horrible officiating? This is the 3rd article saying because Hamlin wasn’t penalized, the yellow line rule should go. I have a better idea. How about Nascar not playing favorites with enforcing the rules, instead? Then you wouldn’t have to worry about getting rid of any rules. Another words, its enforcement, not the rule itself that’s the problem.