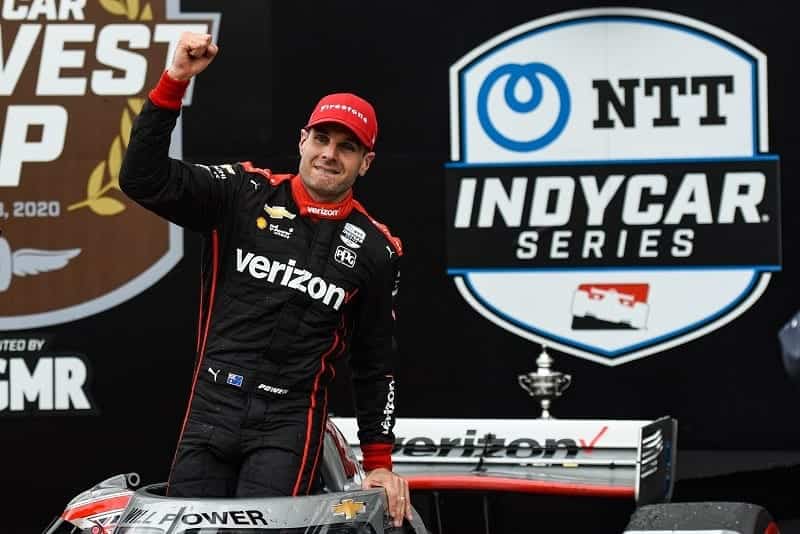 The NTT IndyCar Series finished its doubleheader schedule with the 2020 Harvest GP, and the newly-created event did not disappoint. The Indianapolis Motor Speedway road course produced two races full of passing and with a side order of panic as IndyCar teams scrambled for points ahead of the season finale.

Team Penske returned to dominance, as Josef Newgarden won the Friday (Oct. 2) race to earn valuable points in his championship battle with Scott Dixon. Then on Saturday (Oct. 3), his teammate Will Power picked up his second win of the 2020 IndyCar season. It’s the second doubleheader of the year that Penske cars have swept; they also snagged both victories at Iowa.

What can IndyCar fans take away from the 2020 Harvest GP? Let’s look closer at the race with our Harvest Grand Prix takeaways.

Alexander Rossi picked up two podium finishes over the weekend, suggesting that the inexplicable gremlins which have followed him around for all of 2020 have mercifully been slayed. It wasn’t a perfect outing for the Andretti Autosport driver, who was fuming on Friday after getting another weird penalty from IndyCar race control, this one for violating track limits. And he still hasn’t won a race.

But Rossi has been on the podium for three straight races now, and he can still pick up a victory at St. Pete. And in a year where it seemed everything was out to mess with him, from electrical issues to controversial penalties, it’s just good to see a few things turn his way for once.

2) …or maybe it just migrated to Scott Dixon

Did Rossi and Dixon sit next to each other in a drivers’ meeting or something? That’s the only way to explain how the five-time champion’s luck has turned so sharply in the last few races.

The 2020 Harvest GP was another rough outing for the Chip Ganassi Racing driver. Dixon qualified badly for both races (though it should be noted Race 1 was not his fault, as his qualifying group had their session cut short thanks to a spin from Takuma Sato). Then his tires gave out in the final laps of Friday’s event causing him to lose crucial positions on the way home, and on Saturday the No. 9 car suffered damage following contact with Ryan Hunter-Reay.

And while Dixon battled constantly, there was only so much he could do; Newgarden finished ahead of him both days, whittling down his championship lead even further. It’s a head-scratcher, especially since it’s not like Dixon is throwing his hopes for a sixth title away. But all of these little bad breaks are making him look like he’s been bitten by the gremlins that were annoying Rossi.

3) IndyCar is in very capable hands

If you were somehow still in any doubt about the future of the NTT IndyCar Series, the 2020 Harvest GP proved that there’s plenty of young talent in the ranks. IndyCar’s youth movement has been discussed ad nauseum and several of the newer drivers shone during the Harvest Grand Prix doubleheader.

The best performance came out of Andretti Harding Steinbrenner’s Colton Herta, who picked up his first non-win podium finishes at the IMS road course. Herta came fourth and second in the two races and he drove like a man on fire both days. Herta’s battles with rookie Rinus VeeKay were something to behold, and VeeKay picked up his first-ever NTT P1 Award for Friday’s race.

What’s particularly great about this is that the young drivers weren’t just fast; they also showed that they’re paying attention, too. Being able to drive quickly is only one part of what makes a successful driver. Learning and adapting is also crucial, and with the doubleheader format, IndyCar fans saw people like Herta and VeeKay pick up on what did and didn’t work in Race 1 (like leaning too hard on the push-to-pash button) and carry that information into Race 2. These guys aren’t just fun to watch; they’re working hard, too, and it’ll be wonderful to see how they continue to evolve in future seasons.