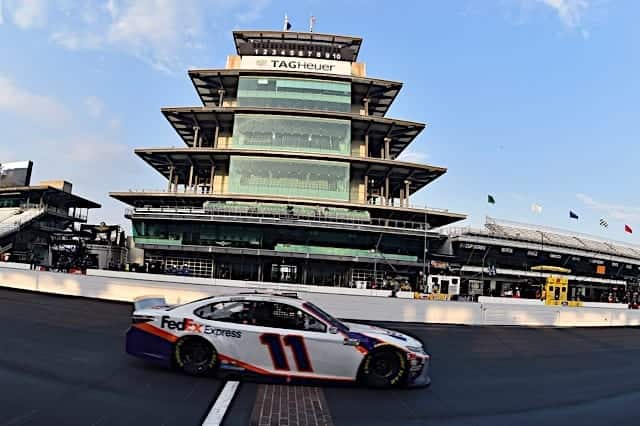 The double yellow line rule has been hogging the spotlight this week (thanks, Talladega Superspeedway), but it’s not the only page in the rulebook that NASCAR should take a new look at in the offseason. Here are a few others that could stand a tweak or three.

There’s more on the line for the playoff teams in the final 10 races, and there should be more on the line in inspection, too. NASCAR has gotten a lot right here by taking away finishing positions for teams that fail, but they aren’t inspecting enough cars with the title on the line.

Every playoff car, especially the ones that qualified for the playoffs in that race, should have a full inspection after the cutoff race — yes, that’s tough considering it’s Daytona, but inspect every part that can be inspected fairly. Somebody’s season is all but over because of the results; they should be absolutely sure that it was legit.

And after the title race: full inspection for all four contenders. Teams are looking for every advantage, but that shouldn’t include anything outside the rules. Fans and competitors deserve to know that the championship was won fairly by a driver in a legal car.

Hopefully, 2021 will see a return to qualifying in some form. It doesn’t necessarily need to be a separate event — practice laps could be counted or the fastest lap from the last race. What NASCAR needs to get rid of is the current system. While it’s nice for the playoff drivers to start up front, the system unfairly penalizes everyone else. A team that’s struggled midpack for a couple of races for some reason will find it hard to gain any traction, because their finish is weighted as well, so it’s hard to get out of a rut.

It penalizes the smaller teams even more because they’ll almost always start near the back, when they might have qualified better if given that chance. While some teams would toil at the back under any system, there are others capable of making a surprise good start or finish, and the current system doesn’t reward them enough.

A lot of next year’s weekend schedules will be dictated by the status of the pandemic, but NASCAR needs to find a way to make this one better. If it’s by random draw, the entire field should be eligible to start up front. The simplest way would be to use each team’s fastest lap from the previous week, or if and when practice returns, their fastest lap of that session.

3. Shocks and Springs and Gears … Oh My!

Yes, mandated gears and suspensions help cut costs, and that helps teams, but NASCAR needs to give teams room to innovate and find speed, bringing back an element of unpredictability in the process. Allowing teams to take chances means attrition, and that’s not a bad thing — it’s something the sport needs.

And it allows teams to shine. If one team can find something to make them faster, it won’t be long before another one finds something else. It was the way the sport thrived for many years, and it could be again.

There are areas where there should be no leeway, for sure. But there need to be places teams can make gains and stand out. The sport was built on innovation, and sadly now most of that innovation is being done by designers and engineers who aren’t competing for wins every week. That’s not what NASCAR was founded on. The test of who could build the best car and put the best setup under it has dwindled until it’s all but gone.

4. Lighten Up a Little

With the NASCAR/IndyCar doubleheader at Indianapolis Motor Speedway on the docket next year, NASCAR should consider easing up on the team limits a bit. That doesn’t mean an organization should have more than four full-time teams, but that they should be allowed to field cars on a limited basis, as was once allowed for running a rookie driver in a handful of races.

That’s one reason to do it, but the doubleheader also offers a hell of an opportunity here. There needs to be some kind of bonus up for grabs, perhaps for any driver who can pull off a top 10 in both races. But to do that, there need to be competitive NASCAR Cup Series seats for the NTT IndyCar Series drivers as well as competitive IndyCar seats for the Cup drivers. A team like Chip Ganassi Racing has that wiggle room; they could put two Indy drivers in Cup cars. But there would be room for one more if Hendrick Motorsports was allowed to run Jimmie Johnson, and it seems odd in general to think that Johnson can’t run for the team he spent his Cup career with if he did want to make a start.

(Team Penske and its manufacturer affiliations presents its own challenge for those drivers.)

Any additional teams would, of course, need to qualify on speed (or by lottery or something if there is no qualifying at all), but in an age where there are often starting spots to spare, a little excitement on that end would hardly hurt anything, and there’s more opportunity for good in this case than harm.

5. Tighten Up a Little

Speaking of teams and drivers, how about an All-Star Race revamp? Once upon a time, if a driver left his ride and was All-Star eligible, so was his old team, because the race recognized that the team had helped the driver get there. That needs to come back — it should be about more than drivers.

Another addition to the field? The Gander RV & Outdoors Truck and NASCAR Xfinity series champions should be invited. They’d need a team to field cars, but that could most likely be arranged, particularly if the four-car limit was cut back, as many of those teams have Cup affiliations already.

It’s not all about additions, though — in fact the field should be tightened up a bit. The All-Star Open used to allow one additional car to move on, and that’s plenty. There doesn’t need to be three also-rans in the show. The fan vote could go too, though giving the fans a say does have merit. So keep it, but only allow those two to transfer from the Open. There’s no need to water down the field to ensure more cars in the race.

I completely agree about qualifying. Just being in the playoff shouldn’t guarantee you a spot at the front of the line. It unfaily penalizes other teams. We are already beaten over the head mercilessly about nothing but ‘THE PLAYOFF’ until I could care less. Then giving those teams yet another advantage is pathetic. Locking teams in to using only specific gears and springs is another silly rule. Either give them a range to choose from or give it up entirely. As Nascar is quickly devolving into an IROC series, viewers are not buying it. These rules, along with the silly ‘playoff’ that isn’t really, haven’t done much to keep fans coming to the races or their tVs.

RE: specifying gear ratios.
As I understand it, NASCAR want to limit the revs a car can turn but they don’t want to go the logical route of putting in NASCAR-controlled rev limited (as in ARCA). Rather they make life more difficult by using the indirect method of specifying gear ration — which must give the crew cheifs headaches trying to beat the system.
Why limit revs? If not we would see a lot more of these OHV engines blowing up due to sky-high revs. The original designers of the small-block Chevies etc. never, in their wildest dreams, expected their engines to rev over 6000-7000 rpm …

Random draw from every chartered team. If Michael McDowell “wins” the pole and Harvick lines up 35th, so be it.

The cream shouldn’t need a handout to rise to the top.

They want the 18 and 48 as close to the front as possible, but there is still the hope that the 18 keeps failing inspections.

Or,,,,They should keep setting the field like they have been and then invert it at the start of the race.
LOL

Or the handicap system like at short tracks. The driver with the highest points per event starts last, then second highest, etc. That would get the 48 and 18 closer to the front, the networks dream scenario. At Pinecrest the third heat was the fast car heat. The top ten drivers in reverse order and only the first finishing four made the feature and the top two made the trophy dash. It was special.

I like that idea, however I have another one. Start the race where you finished. Another reward for winning the race. And if you have a bad race you have to earn your way back up front.

A lot of other good ideas out there besides giving the playoff teams a freebee at the start of the field.

As far as qualifying, I don’t see what was so wrong with showing up at the track with the best you got and running it. Fastest time gets the pole. Period. My big beef is the gear ratios, springs, shocks, splitter and spoiler. Teams used to e given the latitude to play around with setups and it ought to go back to that. I used to like it when a front runner would show up with too tall a gear, or not enough and somebody like a John Andretti or Jimmy Spenser would outclass the field on a particular day. It was fun; you never quite knew what to expect. Today, you can almost name the top 10 drivers for any particular race and not be too far out in left field, except maybe for a wreck. And don’t give me that crap about it being a safety issue. That’s total BS, otherwise the splitters that cut down so many tires would be gone for safety reasons. those are main bailiwicks…

The NFL champion gets the Vince Lombardi Trophy. Maybe NA$CAR in their infinite wisdom should name their championship sculpture the Joe Gibbs Trophy. That would piss off Mr. H to no end. Or maybe reverse the names.